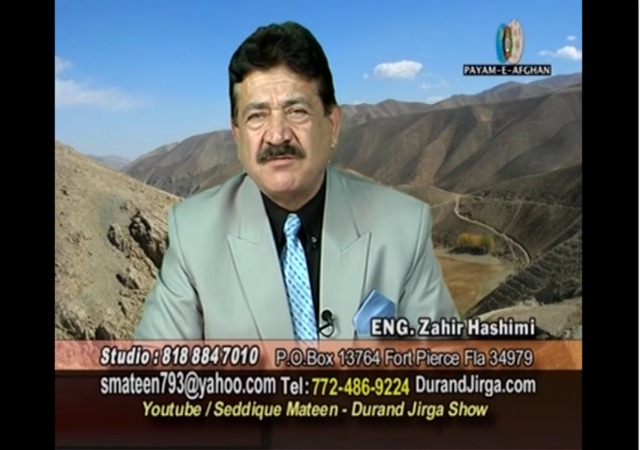 Omar Mateen’s father Seddique claimed his son’s religion had nothing to do with him killing 50 people at a popular gay club in Orlando. But videos show that Seddique supports the Taliban in his native Afghanistan.

Seddique hosted a show called the Durand Jirga Show on Payam-e-Afghan, “which broadcasts from California.” He then posted some videos from the show on his YouTube Channel, but has not done that for over a year. The Washington Post found that the “phone number and post office box displayed on the show were traced back to the Mateen home in Florida.”

He also posted a video of him as Afghanistan’s president on his Facebook page, Provisional Government of Afghanistan – Seddique Mateen. He posted this only hours before his son opened fire at Pulse:

“I order national army, national police and intelligence department to immediately imprison Karzai, Ashraf Ghani, Zalmay Khalilzad, Atmar, and Sayyaf. They are against our countrymen, and against our homeland,” he says, while dressed in army fatigues.

In this YouTube video, he praised the Afghan Taliban and attacked the Pakistan government. He promised that “the Durand Line issue will be solved soon.”

The “Durand Line issue” is a historically significant one, particularly for members of the Pashtun ethnic group, whose homeland straddles the border between Afghanistan and Pakistan. The Durand Line is that border. It is not clear whether the Mateens are Pashtun. The Afghan Taliban is mostly made up of Pashtuns.

The line was drawn as a demarcation of British and Afghan spheres of influence in 1893. The British controlled most of subcontinental Asia at the time, though some parts, including what is now Afghanistan and northwest Pakistan, were only loosely held. The line was inherited as a border by Pakistan after its independence. Since it splits the Pashtun population politically, it is seen as a cause for their marginalization. Pashtuns are the largest ethnic group in most of eastern Afghanistan and northern Pakistan.

The last video on his YouTube page shows him declaring his candidacy for Afghan president….a year after Afghanistan elected a new president.

The Post also notes that Seddique speaks in Dari instead of Pashto, which is “the language of Pashtuns.” This does not quite fit with Seddique’s material since he mostly talks about “issues of Pashtun nationalism.”

Dari is a form of Persian spoken in Afghanistan, recognized by the government in 1964. The government made Pashto and Dari the two official languages of the country.

No, he didn’t shoot all those people because of their religion, he shot them because of HIS religion.

If you consider delusional as normal. The son obviously had a great role model.

We should make an example of dad, perhaps we should expel their whole clan from America?

shame, shame. Do you want all the SJWs to come down on you and tell you that “we’re not like that” and “he has freedom of speech to say that?”

Another father that is the root of his son’s evil.

There seems to be a lot of that going around, right now.

He got angry at two men kissing, which has nothing to do with his religion, even though said religion lauds the killing of homosexuals. I’m glad there’s nothing to see here.

He was angered when he saw two men kissing? And then what, went to his car where he happened to have an AR, a handgun, and possibly a suicide vest? Or did he keep these things at home just in case he saw something while in public that “angered” him? You know, like every normal person has at home “just in case.” What drivel.

In the meantime, ISIS has just hacked the Arkansas Library Association.
http://www.newsweek.com/isis-hit-list-arkansas-targets-authorities-unmoved-466238?rx=us&piano_d=1

Folks, what this shows us is that there is NO POSIBILLITY of us ever coming together on this subject. They have a lifetime of hate for certain groups and they are not going to change because we ask them to. islam is a hating religion/cult that is the exact opposite of our Constitution. Anyone who cannot see this is like the idiots in the “Invasion of the Body Snatchers” that would not believe what was going on until it was too late. The left is defending islamic rights over personal rights guaranteed by our Constitution.

So, was he a refugee?

Keep letting them in country, Barry, Hillary – and Squeaker Ryan.

The 21st century spelling of Quisling is Obama.

And a synonym, would be “GOPe.”