Mateen Never Fired Because He Was Muslim, Claims Former Coworker

Mateen Never Fired Because He Was Muslim, Claims Former Coworker 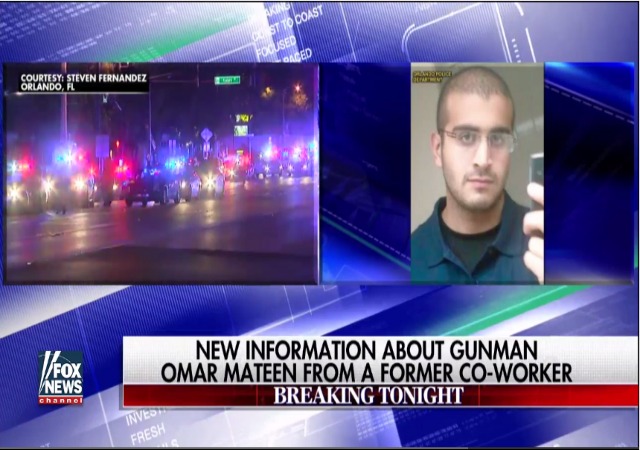 Omar Mateen’s former coworker has told the media that the murderer regularly made homophobic and racist remarks, but was never fired because he was Muslim.

Daniel Gilroy worked with Mateen at “G4S Security at the PGA Village complex in Port St. Lucie.” He told Florida Today that he complained to the company about Mateen’s numerous homophobic and racist comments. He claims they never did anything “because he was Muslim.”

Gilroy quit when Mateen did not stop sending him 20 to 30 text messages and 13 to 15 phone messages everyday:

“Everything he said was toxic,” Gilroy told the paper, “and the company wouldn’t do anything. This guy was unhinged and unstable. He talked of killing people.”

He explained his interactions with Mateen to Megyn Kelly:

Gilroy described Mateen as a devout Muslim who brought a prayer mat to work and prayed several times a day.

“There was never a moment where he didn’t have anger and rage,” Gilroy told “The Kelly File”. “And he was always loud and cursing. And anytime a female or a black person came by, he would use horrible words.”

On one occasion, Gilroy said, Mateen told him, “I would just like to kill all those [n-words]” after a conversation between Mateen and a black man. “A few times he mentioned homosexuals and Jewish people,” Gilroy said, “but we didn’t deal with them quite as often, so it was mostly women and blacks, because those were the people in front of us.”

Eric Baumer worked at the PGA Golf Club at the village and often worked at the same time as Mateen. He told Newsday that Mateen always had “bad things to say” about “blacks, gays, a lot of politicians, and our soldiers.” He even told Baumer that “American destroyed Afghanistan.”

Mateen’s parents came from Afghanistan. His father Seddique has praised the Afghan Taliban and acts as president of the country.

Resident Eleanora Dorsi recounted to Florida Today that she only had pleasant experiences with him. He impressed her with “his chivalry:”

“Whenever I saw him, he was very polite,” Dorsi said Sunday from her summer home in Connecticut. “He was always a gentleman.”

“He even helped me with the car once, so I can’t say he was creepy,” she said.

Mateen’s former classmate Samuel King never saw any hints of homophobia in his personality and even had gay friends. Mateen worked at GNC next to Ruby Tuesday, who employed King.

King said Mateen knew he and his other coworkers were gay:

“That’s the thing that’s pinning me to the wall the most, that it was a gay nightclub,” King said. “Because he would come into the [the restaurant] and laugh with us.

“He might’ve even sat down at the bar and had a drink and laughed with the bartenders, knowing that they were lesbians,” King added.

King remembered showing Mateen pictures of himself performing as a drag queen. He even took Mateen to one of his shows.

The Political Correct climate forced on us by the Left is literally getting people killed, people who are incline to support them. But those same group of people targeted would still rather Islam over Christianity…Sad backwards logic…

One former student told Zirkle on Facebook that on 9/11 as the students were watching the TV in class. On the group chat, the former student wrote that Mateen “stood up in class during the 9/11 attack and after the second plane hit the building he started jumping up-and-down cheering on the terrorist.”

Yes, but despite the fact that the Orlando shooter was already acting like an anti-American, Islamo-terrorist-wannabe back in 2001, we can be sure that he was only “radicalized” because of anti-Muslim statements made by Trump last month, and/or by “hateful” attempts by conservatives last week to pass legislation keeping trannies out of little girls’ bathrooms.

It’s a close call, but what do you think?

Which is a stronger root cause of the murderer’s actions?

a) Omar’s link to Islam.

We have seen this, before, with similar results in a gun-free zone.

The results are different, where somebody is available to stop a killer.
http://libertyfight.com/2007_armed_woman_stops_church_massacre.html

I’m sure that Hillary is still counting on his vote come November.

But you know they’ll find a way to blame Republicans, right?

Intel had a bunch of these guys too. If I recall, the FBI actually arrested one in the late 90s for funding a terror group. The San Jose facilities had conference rooms converted to prayer rooms for them.

The others were just bigots with terrorist sympathies; socially you’d have listen to them run their mouth off about hating Israel / Jews and also tolerate them calling you “f***ing redneck” all the time which they could do freely because they were brown, meanwhile the ultra PC standard white people was being ushered in. But then again I guess this describes life around any member of the democrat party.

Correction.
“acts as president of the country.”
Should probably read “ran for president”

“I don’t have an issue with the blacks,” the 29-year-old killer said, according to the witness.

Remember what the DHS says: “If you see something, say something!”

So this applies to anyone who is NOT a Muslim.

The phrase should be modified to add: “unless that something is being perpetrated by a Muslim, then shut up or we’ll get you fired.”

So: “If you see something, shut the heck up because we don’t want CAIR breathing down our necks.”

LOL all of this guys homophobia, couldn’t change the fact that he was gay. Hatred of that which you can’t change is pretty powerful.

Prior to 911, the operating plan for plane hijacking was don’t fight….negotiate their demands. For hours police slipped back into that same pre-911mode of negotiating a conflict resolution. The West is big in negotiating conflict resolution that only carries the fight to another place and another day. The US has slipped back into the pre-911 mode of misidentifying the nature of the beast. We have set the stage for a US Beslan…. Paris nightclub was the dress rehearsal for nightclubs…. We have seen their template for other forms of terrorism.

We have it all wrong…. The truly “radical” Muslim doesn’t follow all the commands of The Prophet and Allah….. Orlando is the purest expression of Islam.

The “peaceful moderate” Muslims are apostates. The don’t obey the Islam created by Muhammad. It is the terrorist and Iran who obey Muhammad’s command for world conquest, to kill those who resist and to establish a worldwide Sharia based tyranny.

There are an awful lot of them, though. They are not apostates, just decent people whose decency, that they learned from their parents and teachers, moderates their Islam. They can’t believe that Islam really stands for what it sounds like, so they make up their own interpretations. And they are the vast majority of Moslems, so it’s important not to piss them off.

Democrat’s responce to Muslim’s slaughter of a hundred unarmed people is to disarm everyone and thereby enabling the fellow fascists continued slaughter of Americans.

It seems to me as if his self-loathing at his own homosexuality was building up over years, combined with incresing devotion to a religion that does not balance the condemnation of sin with love for the sinner. I imagine he finally decided that going out like this would atone for his sins; that he prove his penitence and devotion by killing as many sinners as he could, specifically people guilty of the same sin that he was repenting, and his death as well as theirs would earn him forgiveness and 70 raisins.