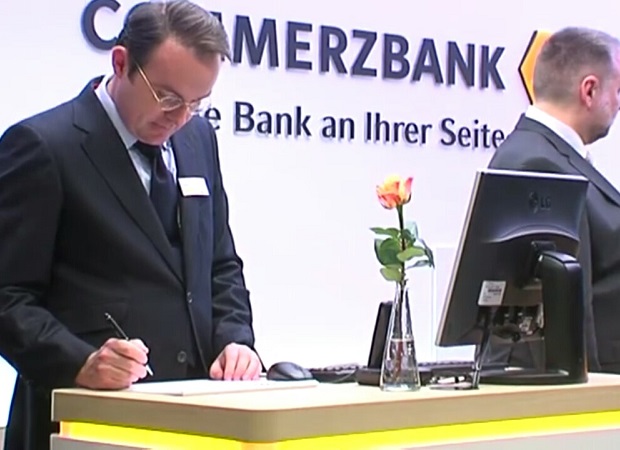 What should be first of its kind, a leading German bank has shut down an account connected to the anti-Israel boycott campaign — also know by the acronym of BDS. Commerzbank, Germany’s second largest bank, closed the account of anti-Israel and pro-BDS website “Der Semit”. The action is expected to have implications for other banks providing services to groups affiliated to the BDS campaign throughout Germany.

Israeli Minister for Public Security Gilad Erdan welcomed the decision taken by Commerzbank and urged other European banks to take similar steps against anti-Israel and anti-Semitic groups raising funds and carrying out transactions in Europe.

The action taken by Commerzbank and the recent closure of at least five other pro-BDS accounts is being credited to investigative reports published by the Jerusalem Post. Last month, PayPal and Credit Mutuel shut down the accounts of BDS France. In April, Austrian financial company Erste Group had closed BDS Austria’s account. The Jerusalem Post’s European correspondent and fellow for the Foundation for the Defense of Democracies Benjamin Weinthal writes:

In the latest of a series of similar account closures by international banks, German bank Commerzbank has shut down a boycott Israel account, the first action of its kind in that country, The Jerusalem Post has learned.

The closure of the anti-Israel account because of Boycott, Divestment and Sanctions activity is believed to be the first instance of a German bank taking action to halt the movement. (…)

[Jerusalem] Post’s investigative series on BDS accounts in Europe has led to the closure of six accounts of pro-BDS organizations. The network of BDS accounts occasionally overlaps with the shadowy world of Palestinian and Iranian terrorism and unfettered movement in the EU.

Last week, the Austrian bank Bawag shut down the account of the Austria-Arab Culture Center, which had hosted convicted Palestinian terrorist Leila Khaled, who participated in the 1969 hijacking of a TWA jet. A year later, she hijacked EL AL flight 219. Khaled was in Europe as part of a speaking tour.

Anti-Israel campaign in Europe has a long history of links with terrorists and radical Islamist groups. Last week, the Austrian bank Bawag terminated the account of the Austria-Arab Culture Center, which hosted the convicted hijacker and Palestinian terrorist Leila Khaled.

The latest crackdown by European financial institutions comes at the same time as growing number of states across the U.S. are enacting laws to counter the anti-Israel boycott campaign. Last week, Governor of New York Andrew Cuomo issued an executive order prohibiting the use of public funds for BDS-linked activities.

“BDS-Movement” is desperately trying to set foot in Germany. It is increasingly using college campuses and left-wing events for fundraising and agitation. BDS Germany infiltrated this year’s May Day demonstrations held in major German cities to peddle its anti-Israel and anti-Semitic agenda.

Though long-awaited curbing of financial activities of BDS in Germany is a welcome sign, however pro-Israel grassroots groups need to take more active public stand and counter the anti-Israel campaign in campuses and local communities.

[Cover image courtesy Commerzbank, YouTube] [Writer is founder of Indians For Israel, a pro-Israel grassroots group based in Europe]

Finally the Germans are doing something right.

So there are some good guys out there, at a time when Facebook,for example, appears to be at war with Israel.