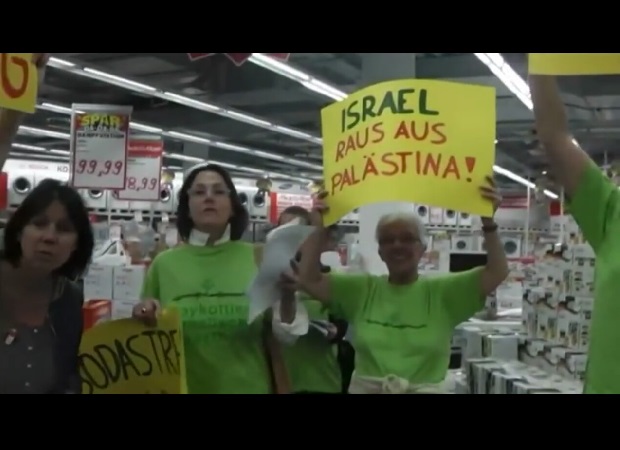 Anti-Israel boycott campaign, the so-called BDS movement, and other anti-Israel groups are carrying out a coordinated campaign to hijack the May Day demonstrations in Germany with an aim of spreading their anti-Semitic and anti-Israel message. The blatant anti-Semitism and the hatred of Israel these groups propagates is getting so repugnant that it is unnerving even the old left-wingers who otherwise never missed a chance of criticising the Jewish State.

The attempts by some moderate groups to keep anti-Israel agitators from taking over the Labour Day events have failed. A resolution tabled by a prominent left-wing activist Jutta Ditfurth seeking to expel openly anti-Semitic groups from the event was rejected overwhelmingly by the organising committee, forcing Ditfurth and her environmentalist group groups to leave the alliance.

May 1, Germany’s Labour Day is traditionally used by the Left to mobilise the base around left-wing issues. Berlin-based small Jewish newspaper Jüdische Algemine writes:

Jutta Ditfurth is well acquainted with the German radical left. “Never before did we witness this sort of hate filled anti-Semitic discussion in a supposedly left wing alliance,” says the Frankfurt-based journalist who is active within the “Ecological Left” and has an office in Frankfurt’s old Town Hall.

She is referring to the confrontation over Berlin’s “Revolutionary May Day Demonstrations.” Anti-Israel BDS Movement accompanied by F.O.R. Palestine — abbreviation for “For One State and Return in Palestine” — will be taking part in the event. The group calls for the “destruction of Zionist colonial system” allowing only “non-Zoinist Jews” to live in the land.

[…] Ditfurth maintains that there was always anti-Semitism [at the demonstrations] but “[organisers] always succeeded in making it clear that May Day in Berlin was not about Israel, but this time “things are substantially different.” Now the groups like BDS and F.O.R. that are primarily concerned with fighting Israel have joined the alliance [organising body] in a “raid-like” manner. [Author’s translation]

Jutta Ditfurth, co-founder of the German Green Party, has been using social media to point out the rising anti-Semitism within the Left. Ditfurth is regularly smeared for her stand in social media and left-wing blogosphere. Apart from isolated activists like Ditfurth there are hardly any notable voices challenging the unchecked infiltration of German Left by anti-Israel activists.

This plight is not limited to Germany alone. Even in the U.S., “Palestinian” agitators are attempting Alinsky-style takeover of protests movements that have nothing to do with their perceived grievances against the State of Israel. From ‘Black Live Matter’ to rising college tuition fee, these activists are ready to piggyback ride any issue if it helps them to spread their hatred of Israel.

Just seven decades after the Holocaust ended — murdering six million Jewish men, women and children, the anti-Semites even in Germany feel increasingly comfortable to crawl out of their hidings. Today, those who choose to stand indifferently at the sidewalks as this evil resurrects again in their country must remember that Jews have managed to survive the near-cyclical outbreak of anti-Semitism throughout the written history — albeit at an unspeakable high price, but those who carried the surge in them have been utterly destroyed. If anti-Semitism has been injurious to Jews, it has been devastating to the hosts who carry it.

[Author is an analyst based in Germany]

Ah, the old Nazi formula that worked so well back in the 1930’s. NeoNazis branding themselves as ‘leftists.’

It was not the nationalists with an imperial dream.