“This isn’t how politics is supposed to work in the United States.” 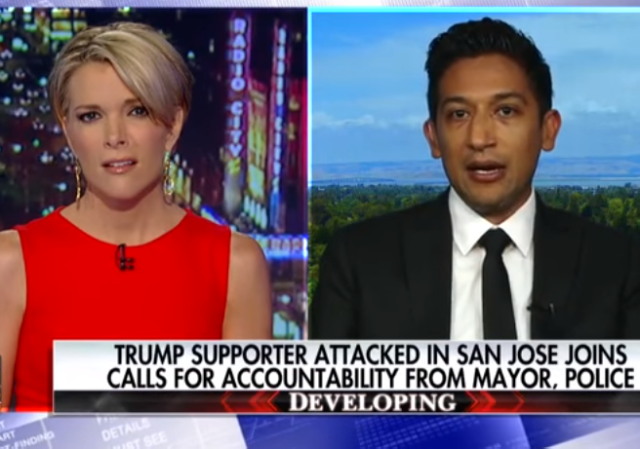 Juan Hernandez is a member of the Log Cabin Republicans who attended the Donald Trump rally in San Jose last week and was assaulted by a violent mob with other attendees. For the mere offense of attending a political event, Hernandez suffered a broken nose and a concussion.

Let’s make it as plain as possible. If Hernandez, who is Latino and gay, was a Hillary Clinton supporter who had suffered this violence at the hands of Trump supporters, not only would it be nightly news for days, it would be indisputable proof that all Republicans are racist, violent homophobes.

Hernandez told his story in an article for the Washington Post:

I’m voting for Donald Trump, so I went to see him speak. Protesters broke my nose.

Last Thursday, I left work about 5 p.m. and drove to the San Jose Convention Center to hear Donald Trump speak.

I’ve been voting for conservative candidates for 15 years and a registered Republican since 2015. Now that the general election is underway, I believe Trump is the best candidate to fix our country’s many problems, and I believe he’s going to be the next commander in chief. So I was excited to hear him, and to show my support. Walking into the rally with a friend, I was a little wary: Trump’s speech to the California Republican convention in Burlingame had been disrupted by protesters, and I wasn’t sure whether to expect a similar scene in San Jose. But we got to the event early, and we must have been inside already by the time a crowd of protesters gathered in the streets near the convention center.

The speech really got me energized. I got a new sense of appreciation and respect for Trump after a Bernie Sanders supporter interrupted him with a sign. Trump didn’t blink: “Darling, there’s no way he can win, but keep your sign high,” he said. That is the president that I want. It was great being around so many Republicans — in the Bay Area, we don’t have a lot of that, so it was great to feel the camaraderie of being part of the GOP.

My trouble began once the rally was over.

My friend and I joined a crowd of Trump supporters who had all left the convention center around the same time. The garage where we had parked our car was right next to the building, but police were directing everyone around the block to another garage entrance instead. The farther we walked, the fewer Trump fans were with us — people began peeling off to go to restaurants or bars in the area, or to other garages nearby.

And suddenly, there were protesters everywhere. Some were holding Mexican flags, or burning American ones. They were yelling “F— Trump!” at us and cornering us. Some of them started grabbing Trump supporters — they were going up and slugging people, sucker-punching people, just picking random people out. As much as we wanted to help, because our fellow Republicans were getting hit, I knew any moment that could be me. So my friend and I just kept walking — sometimes, we’d be running. We saw police standing nearby, but they didn’t do anything. That scared me, because I thought, “Okay, if I’m next, there’s going to be no cops.”

Read the whole thing to learn how blood poured from his nose after multiple punches.

Hernandez also appeared on the Kelly File this week:

If this makes you mad as hell, it should. There’s absolutely no excuse for this or anything like it to happen in the United States.

Democrats and their allies in the media have spent months accusing Trump supporters of racism and violence. It’s time for them to admit the biggest problem is coming from the left.

Time for the Left to Stop Excusing Violence Against Trump Supporters

“They allowed the police to just stand there,” said Hernandez. The chief says police were right to maintain the “skirmish line.” The mayor issued a statement promising authorities will investigate and prosecute offenders. Liccardo assured me city officials are “looking for ways to do better.” Hernandez says that detectives have shown him photos of suspects; he believes they’re serious about arresting and prosecuting violent protesters. Police already have arrested four offenders. The San Jose Police Department is soliciting more information from witnesses. Liccardo told me he expects more arrests shortly.

That’s all good, but it’s not good enough. It’s time for Democrats to stop blaming Trump when left-wing activists pummel his supporters. Liccardo denied that he blames The Donald, even as he offered up his “underlying concern” that Trump’s “divisive rhetoric will encourage thugs.” Clinton likewise faulted Trump for “inciting violence.” Bunk. Trump is responsible for making pro-illegal immigration activists and others angry, but he is not responsible if they choose to intimidate, even beat up, his supporters.

When you call Democrats on their absolution for thugs, they dutifully protest that they do not approve of violence. I don’t think they’re angry with left-wing activists for throwing punches. Methinks their real objection is, as Los Angeles Mayor Eric Garcetti told the Los Angeles Times, violent protest is “a tactical mistake.”

Pundits have speculated that the future of the Democratic Party now belongs to Bernie Sanders.

In truth, it looks more like the party of Bill Ayers.

Crickets from the main stream media! Has anyone seen this story in the left press?

All the main stream media reports is that Trump’s word have caused all the problems.

PS I went back and forth about using the profanity. But that is the only way you can get the left’s attention.
Make no mistake we are in a war now.

This only happens in fascist prog controlled areas where the union police are goons and the lemmings are unarmed. The thugs need to be shot down.

I have said it before, the Left’s “peaceful Protest” (violent riots) remind me of the old communist revolutions from around the world. America is becoming what it once hated.

Left wing violent extremists ARE the same as the KKK.

Beginning to wonder if they are worse than the KKK.

Believe it or not, the Left has a history being violent and racist. Here in the USA, a lot of the Left’s policies are based from the KKK, such as gun control to make minorities defense less and create more victims in which to spew out their lies and false promises then tell them it was the right’s fault.The Left lowered the standard of education for them as well, instead of encouraging minorities to work harder, they lowered the bar. Of course the minorities thought it was a good idea but none suspected that the Left had out rightly called them unintelligent enough to meet the same standards as whites once had. But know wants to see the truth, all they want is to be told what they want to hear which is exactly what the Left does.

Wasn’t there a prominent Democrat who once said – “If they bring a knife to the fight, we bring a gun.”

Oh yeah, it was the President of the United States and moral leader of the Democratic Party, Barack Hussein Obama.

Sounds vaguely familiar… for some inexplicable reason I’m hearing it in the same voice as “punch back twice as hard” and “punish your enemies”.

It can’t be right, though… everyone knows the the Democrats are the party of peace, love, tolerance, and unicorns.

Nothing will push back against the left and their spineless #NeverTrump allies better than a big Trump Victory in November. Make it happen!!

Keep this up thugs. By the time Trump is elected (or you steal the election) Americans will be willing to send you across the border in air launched cannons. And nobody will care if Mexico erects nets.

The police ignoring thuggishness is a bad omen. Though the police are charged with protecting us from criminals, as others have observed, the police serve to protect criminals from the public. If the police establish a pattern of standing down, people will take matters into their own hands.