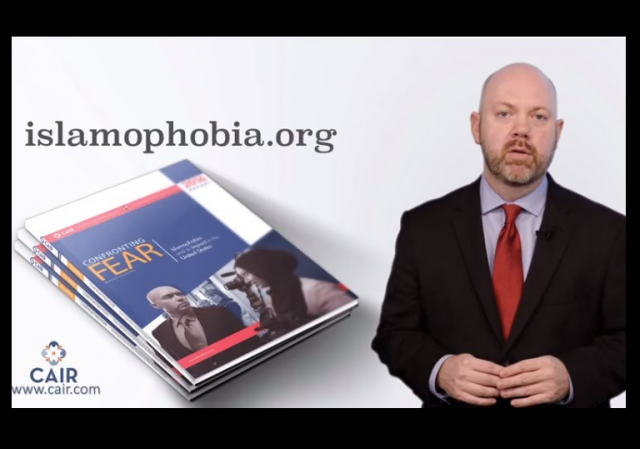 There were two big developments today in the attempt to shut down debate about Islamic terrorism.

First, U.S. Attorney General Loretta Lynch fulfilled her promise to excise from the transcript of the Orlando terrorist’s 911 police tape all references to Islam and ISIS. After intense and near universal criticism and mockery from across the political spectrum, DOJ relented and included the references.

Second, the Council on American Islamic Relations (CAIR), which the United Arab Emirites declared a terror group, released a report titled Confronting Fear: Islamophobia and its Impact on the U.S. 2013-2015. The Report, produced jointly with the U.C. Berkeley Center for Race and Gender, was published on a website run by CAIR called Islamophobia Monitor, with the url islamophobia.org. A pdf. of the report is here

The report has a laundry list of groups that CAIR claims spread hate of Muslims, then combines their budgets for 20113-2015, and declares that $205,000,000 was spend promoting Islamophobia (emphasis mine):

According to a report released today by the Council on American-Islamic Relations (CAIR) and the Center for Race and Gender at UC Berkeley, 33 Islamophobic groups had access to at least $205 million in total revenue between 2008-2013.

The report, titled “Confronting Fear,” also presents a four-point strategy designed to achieve a shared American understanding of Islam in which being Muslim carries a positive connotation, and in which Islam has an equal place among the many faiths that together constitute America’s pluralistic society.

Bazian added: “The hope is that this report and others like it will provide the needed grounding for communities across the country to use for effective engagement with policy makers, educators, civil society leaders, and media outlets. Education and applied research is the best avenue to uplift and bring about a social justice transformation in society and this report is a step in that direction.”

Hatem Bazian is one of the founders of the viciously anti-Israel Students for Justice in Palestine and is notorious for his incitement against Israel on campuses.

The list produced by CAIR of supposedly Islamophobic organizations includes Fox News, The Washington Times, The American Center for Law and Justice (which defends religious and First Amendment freedoms), The David Horowitz Freedom Center, and a host of other groups and blogs which focus on Islamic terrorism.

There is a unifying theme for almost everyone and group listed — they are political opponents of CAIR, and there is little to no proof presented that they hate or instill hatred of Muslims, as opposed to Islamic radicals and jihadists.

This is what CAIR does. It seeks to shut down debate about Islamic radicalism by tagging those who oppose them as Islamophobic. This is a tactics used by other leftist groups, such as the Southern Poverty Law Center and the Center for American Progress, which have produced similar “Islamophobia” reports and lists.

As with the Obama administration, CAIR views the true threat not as being the person who shoots up a gay nightclub while proclaiming that he is fulfilling the will of Allah and pledging allegiance to ISIS. No, to the CAIRs and Obamas of the world, calling attention to the Islamist connection is the greatest threat.

This is a bogus report — but I’m thrilled it came out on the same day as the government attempted to censor the Orlando terrorist’s own words about his allegiance to Islamist radicals.

CAIR wants sharia here. muslims don’t get to decide to impose sharia on the rest of us. Want sharia, go where it is instead of forcing it on us.

A few days ago, CAIR opined that Orlando was the confluence of “Islamophobia and homophobia”.

They know their Collectivist memes. You gotta give them that…

being concerned about a cult who’s members are known to routinely attack and/or kill non-members, and even each other, isn’t a “phobia”…

now FOAD with your BS.

Precisely. By definition a phobia is irrational.

Exactly. Those who control the language control the dialog. I doubt 1 in 100 is irrationally AFRAID of muslims. It is outright despising, if not hatred. But, it is not fear.

I am outraged . . . that Legal Insurrection didn’t make it onto CAIR’s blacklist. We need to try harder 😉

Next Year on the Blacklist!

I can’t remember American Jews, Catholics, Baptists, Methodists, etc.. having to step forward and rationalize members of their faith or congregations’ actions in mass murders. As Franklin Graham has noted those weren’t Presbyterians that flew those planes into The World Trade Center, Pentagon or abortively (let’s roll!!) into the Capital. Being Muslim means never having to say “sorry” for your actions.

“The report, titled “Confronting Fear,” also presents a four-point strategy designed to achieve a shared American understanding of Islam in which being Muslim carries a positive connotation, and in which Islam has an equal place among the many faiths that together constitute America’s pluralistic society.”

Unless and until such reports recommend putting an end to the blasphemy and embrace of genocide by the Islamists, they will mostly be a matter of disgust for decent people. CAIR,by its actions, has shown itself to be unworthy of respect.

America is “an open, democratic and religiously-inclusive society.”
Denying that is very dishonest.

The difference is, we openly denounce, condemn and fight racism, homophobia, misogyny, antisemitism and almost any expression of hate among us. (Curiously, we don’t fight white-male-phobia)

If CAIR had some sense of decency, they would be openly denouncing, condemning and fighting those within their religion that practice terrorism, homophobia, antisemitism and misogyny. Instead, they want to shut down the discussion.
They are in practice, supporting terrorism.

The Democratic Party is a wholly owned and operated CAIR subsidiary.

If fear that Muslims want to take over the world, put us all under Sharia law, and convert us all by the sword is classified as “Islamophobia” then I guess that’s what I have. And I know what the cure is, “Warheads on foreheads.”

What moslems do speaks so loud, I cannot hear what they say.

To the left, the reality of Islamic terrorism seems to be the “climate change” scam of the right (except substitute the cooked books of data with actual bombs, beheadings and mass shootings).

I don’t see a path where this gets better before it gets worse.

Phobia, phobia, phobia, phobia – crap. Pure crap. Saying “no” to someone does not mean I hate them, nor does it mean that I fear them. Those people who abuse the language so thoroughly as to imply such bigotry in me are contemptible little slugs; nothing more.

Has L(omitted) I(omitted) been redacted from CAIR’s report for fear that we’ll pledge allegiance to Professor (omitted), all don orange and black polo shirts, and carry out lone wolve acts of commonsense observation and commentary steeped in radical strains of peaceful interpretations of the survival instinct?

I expect to see Le-gal In-surr-ec-tion playing against CAIR in the Islamophobe Bowl in the near future.

Who the hell is doing the ranking system at CAIR?

When you enter the construction zone of the “Islamophobia” social construct, make sure your hard hat is made of kevlar. There’s a lot of crap raining down from that tower.

Yet the scaffolding they’ve erected for “Islamophobia” is just breathtaking.

Not only is Bazian a co-founder of SJP, he has publicly called for an intifada in the US (2004) and is reported to have told a protest audience to look at all the Jewish names on university campuses. Some example.

“Unless and until such reports recommend putting an end to the blasphemy and embrace of genocide by the Islamists,”

Valerie, you are obviously wholly ignorant of Islam’s foundational teachings. The killing, enslavement, and/or forced conversion of everyone who is not Islamic occupies the same place in their religion as the 10 Commandments for Judaism or the Sermon on the Mount for Christianity.

noun
1.
a persistent, irrational fear of a specific object, activity, or situation that leads to a compelling desire to avoid it.

Hating 7th century got rapers who believe I must convert or die sounds pretty damn rational to me.