“It has to be paid for by somebody.” 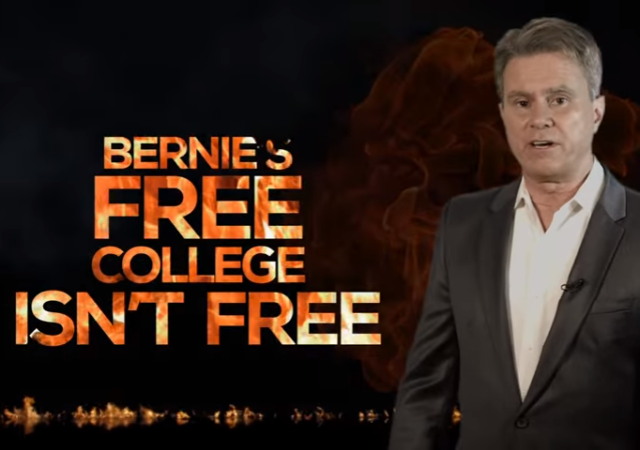 In Bill Whittle’s newest Afterburner video, he addresses the issue of free college and although he focuses on Bernie Sanders, the same truths apply no matter which politician is making this promise.

You don’t need a college degree to understand Whittle’s argument. Anyone with common sense knows there’s no such thing as free.

Bernie Sanders has bewitched a new generation of voting students by promising them free health care and free college.

So I’d like to address this brief video to you young people who are Bernie supporters and are in it for the free college. Can we just think this through for a minute? Please?

Let’s say Bernie Sanders gets elected, the Democrats run the table and now we have a socialist President and Congress and sure enough Bernie Sanders passes a bill that says that every American now gets free college.

What does that mean?

Because if it doesn’t mean that, then Free College is a non sequitur: a conclusion or statement that does not logically follow from the previous argument or statement; non sequitur literally means “it doesn’t follow.”

So “free college” doesn’t mean what it says it means because college — like health care and houses and Xboxes and Ferraris – costs actual money. So it has to be paid for by somebody. You like it because it’s not going to be paid for by you.

But if you get your free college and the result of that is that Bernie adds another $17 trillion to the already outstanding $20 trillion dollar debt – almost doubling it from Obama, who almost doubled it from the previous 43 Presidents going back 239 years to the signing of the Constitution – if Bernie doubles the debt to 37 thousand billion dollars – then who do you think will be paying high taxes for the rest of their lives to pay off that debt?

Bernie Sanders has not watched this video. In fact, Sanders is still pushing his free college plan whenever he gets a chance. The Daily Californian reports:

The press conference, held at the campus’s Center for Labor Research and Education, came just days before the California primary elections, which will take place June 7. Sanders largely focused on economic issues — a consistent theme throughout his campaign — while also taking time to address climate change, healthcare and social security.

“We (can) pay for every proposal that we have brought forth — rebuilding our infrastructure, making public universities tuition-free and expanding and extending social security,” Sanders said at the press conference. “We are going to transform America, and we are going to address the real issues facing working families.”

The 2016 election will come and go and no matter who wins, this will be an ongoing issue. There are many true believers on the left and it doesn’t seem like any of them are economics majors.

and it doesn’t seem like any of them are economics majors.

Don’t count on much help from economics majors. They may be students of Marx. Who, in turn, was a fairly serious student of Smith, Ricardo, Mill Sr., etc; not exactly economic slouches.

In other words, some bona fide economists are part of the problem.

Those who want the free stuff don’t care that it isn’t really free as long as it is FREE for them and available to them.

But it isn’t free for them.

Sure, they don’t have to pay for it now, but they (and everyone else) will be paying for it the rest of their lives, and their children will see fewer opportunities and less wealth — assuming the economy is still nominally functional by then — for all their lives, too.

Plus, once everyone has a “free” college degree, they’ll find that college degrees are worth less than an equal number of years’ working experience. The kid who learns a skilled trade right out of high school will be earning a dramatically more comfortable living than the “free college” grads.

The problem with free college isn’t just about the level of taxation needed to cover it. Despite initial promises of “if you like your university you can keep your university”, they would be completely government funded and government run or at least heavily regulated.

In my view arguments about taxation aren’t very effective – arguments about competence and control are much better. In my area, a DC suburb metro is shut down this week because of, to make a long story short, managerial incompetence. For people who depend upon it, its an area of their lives they have no control over and that just can’t seem to fix its problems no matter how much is spent and what promises are made.

I love Bill Whittle’s videos, and this was a great one.

But the saddest part, in my opinion, is that “‘Free’ stuff isn’t free” needs explaining.

Our 7- and 10-year-olds understand this.

Because while money does grow on trees, wealth does not, and neither does labor.