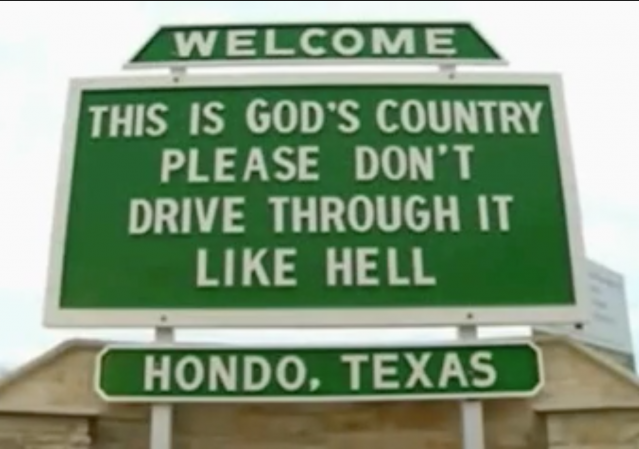 Heaven forbid atheists show any tolerance for people of faith or that nasty, three-letter-word, “God”.

The Freedom From Religion Foundation is raising a stink over a highway road sign that has been a staple of Hondo, Texas since the 1930’s. Why? Because the sign refers to Hondo as “God’s Country”.

The Foundation penned a letter to Hondo’s Mayer, Jim Danner, demanding the signs be removed.

Foundation Co-President Anne Laurie Gaylor referenced the establishment clause of the First Amendment in a letter sent to the city last week. She wrote that the city-owned signs on public property “convey government preference for religion over nonreligion” and send “the message that nonbelievers are not welcome in the city.”

“The message assumes a common god, yet imagine the public outrage had the city posted a sign that said, “This is Vishnu’s Country,” Gaylor told Danner in the letter. “It is equally inflammatory and inappropriate to post a sign dedicating a city to the god of the bible.”

A formal response from the city is being drafted by its legal counsel, but Danner left no doubt that he’ll oppose removing the recently restored placards beside U.S. 90 that say, in full, “This Is God’s Country — Please Don’t Drive Through It Like Hell.”

He predicted that the people of Hondo would back that stance.

“I think when they find out we received that letter, we’ll have total support from the community to keep them,” Danner said.

In 2009, the signs were removed temporarily for a highway construction project. Local residents were happy to see their return in 2012 at the project’s completion. Even the local gardening club donated to the landscaping of the newly reinstalled “God’s Country” landmarks:

The Foundation is a national organization that trolls small towns for references to higher powers:

Frank Garza, the city’s attorney, said his preliminary view is that the signs encourage driver safety, as opposed to endorsing a religion.

City Manager Kim Davis said, “They’re alleging that the signs make anyone who is not a Christian feel unwelcome. The mere fact that we often have people come to town to take a picture with the signs would say otherwise.”

The foundation, based in Wisconsin, is a national organization dedicated to the separation of state and church, with 24,000 nonreligious members nationwide, including almost 1,000 in Texas.

Hondo residents (and non-residents) are rallying together to support the long-standing landmarks.

“If you don’t like it, don’t read it or drive around,” said Stacey Cross, who was inside a store where T-shirts featuring the full sign hang on the wall. “There are other ways around the city,” reported KTSA.

I wonder if there were any Atheist Jews involved.

The State-established Pro-choice cult tolerates no competitors. It’s a leftist thing. They receive their religious/moral instruction from the twilight zone as interpreted by liberal judges.

angry at God for not existing.

How can something they don’t even believe exists cause them to get so angry? And why aren’t there any atheists in muslim countries? Well there might be, but they don’t have a head any more.

I find it very interesting that atheists fear a humorous sign that uses Biblical images to encourage some people to drive carefully. Perhaps they do hear footsteps when nobody is following them. Or, maybe somebody is and they know it.

“Freedom From Religion Foundation” is a negative concept that somehow seems odd to me. Perhaps that is because I have driven through Hondo…respectfully. Perhaps THAT is why the sign is dangerous.

I work in San Antonio and I have never heard of the “Freedom From Religion Foundation.” My guess is they need money and that comes from publicity regardless of how trivial its source.

Went through there in August one time. It might be God’s country, but it does get hotter than hell.

Maybe they could put up ‘trigger warning’ signs on either side, for the faint of heart.

But, it’s Texas, so maybe it would be easier to just put trigger warning signs up at the state line. 😀

Another damned example where the damned Leftist Socialists cannot read and cannot accept that the Constitution says what it says, not their cockamamie misreading of, and mis-redefinition of,words.

The Queen of Hearts must have been the prototype Socialist, making up word definitions as she went along.

Yep, Freedom OF Religion is quite a bit different than Freedom FROM Religion.

You mean Freedom of Religion does not mean Freedom from Religion?
Did the founding Fathers actually support the free exercise thereof?

It’s in the Constitution until the Supreme Court decides to ignore it.

Could the town sell the property, and the sign to a private group? It seems harmless enough. Look what Sebrell Virginia did, courtesy of the civics club: https://c1.staticflickr.com/1/5/8044904_2865a737d5_z.jpg?zz=1

City signs like that in my neck of the woods (hey, we have woods in Kansas) have a whole series of logos of the various social groups involved in community activity under them, such as the Knights of Columbus, the Order of the Eastern Star, the Masons, Elks, Moose, LWML, VFW, etc…

I suppose it’s only a matter of time before the Legions of Perpetual Outrage come sweeping around here. I don’t think they’ll get a very friendly reception.

I bet if it were an Islamic based sign, the Church of the Left would not have said a peep.

Gen. Philip Sheridan: “If I owned Texas and Hell, I would rent Texas and live in Hell.”

He was apparently quite the dandy and couldn’t stand the weather.

City’s best and obvious argument: The sign is an appeal to drive slowly and treat the place with respect, not believe in God.

It does not matter what the people say or want regarding the sign. The legal costs fighting the Freedom From Religion Foundation will bleed the city of Hondo into bankruptcy.

Soon Utah will be sued over the “beehive” symbol. That court case will be epic and Utah will be forced to scrub the symbol at a cost of hundreds of millions of dollars.

Is it necessary to be illiterate to be an Atheist? A simple reading of the 1st Amendment, “…Congress shall make no law respecting an establishment of religion,..”

Did the U.S. Congress erect that sign? I think not. Short of that: shut up. Don’t mess with Texas.

The fourteenth amendment incorporates all the rights guaranteed by the first. If there is an individual right not to have an established religion, then it now applies to the states and all their subsidiaries. Justice Thomas believes that the establishment clause, unlike the rest of the first amendment, does not protect an individual right, but is merely a prohibition on Congress, and therefore is not incorporated in the fourteenth. His view makes sense to me, but pretty much nobody agrees with him. He’s certainly the only person with that view who has ever served on the Supreme Court.

I am a Texan (San Antonio). I find all religions equally incomprehensible.

That having been said, the so-called “Freedom From Religion Foundation” is cordially invited to take a long walk off a short pier. Unlike them, I have no problem whatever with the Hondo signs, or with a municipal Christmas tree, or any of the other things that they object to. To quote Thomas Jefferson, “But it does me no injury for my neighbor to say there are twenty gods or no God. It neither picks my pocket nor breaks my leg.”

Thank you, Kemberlee. Hoping you and yours have a happy and safe Fourth of July. Me, I’m goin’ shootin’.

Jefferson, however, did not want any unit of government saying whether there are any gods, and if so how many. He’d probably have sympathised with the aims of this lawsuit, if not with its interpretation of the constitution.

If these atheists really believed what they’re saying, they wouldn’t waste time on little signs like that.

Every year, how many people are required by law to give money (taxes) and time (jury duty) to governments with overtly religious names? Why aren’t they suing Los Angeles, San Francisco, San Antonio, St Petersburg, etc.?

Because they’re just names. Nobody thinks that they represent an actual endorsement of religion, whereas these signs clearly do.

If these leftists are so proud of being democratic and supporting the will of the people, then how can they argue that the one person who is offended by this sign is justification enough to force and entire city who likes the sign to remove said sign? The illogic of the Left is incomprehensible.

They don’t claim to be democratic and support the will of the poeple. The whole point of the constitution is that the people don’t get to do whatever they like. And one of the things the people don’t get to do is establish an official religion; current Supreme Court doctrine says that means any endorsement of one religion over another or of religion in general over non-religion.

All levels of government, according to current Supreme Court doctrine, must remain strictly neutral on all religious matters, and therefore must not proclaim that there is a God, Whose country it is. At least, not in a way that anyone is likely to take seriously.

And if this makes it to court, that is going to be the key question: is this a serious statment on Hondo’s part, or is it just a figure of speech, not to be taken literally. Hondo’s only possible defense is that “God’s country” is a widely-used term that is generally understood to mean simply “a beautiful place”, or “a lucky place”, a place that any hypothetical deity would choose for its own if it could, rather than the literal property of an actual Creator. And I think such a defense would be likely to prevail, because the term really is widely used that way.

In addition to what Milhouse has said, the Founders recognized that there were some things which were too important to trust to the will of the majority as represented by the government and that individuals and minorities should have the right to rely on those things even if the majority opposes or disapproves of them. They passed the Bill of Rights, which includes the First Amendment, just so that “one person who is offended by this sign is justification enough to force and entire city who likes the sign to remove said sign” (sic).

Oh, and by the way, offense has nothing to do with it. A plaintiff in a case such as this does not have to allege or prove offense: in these kinds of cases it’s wrong and actionable merely because government is endorsing religion. A civil libertarian who is a faithful Christian could have legitimately made this complaint simply because they believe that the city government is endorsing a religion even if it is their own religion. True, having some offense may add a little “oomph” to the complaint, but it’s not needed.

Jeez. The signs are funny and get the point across. Lighten up.

I hope the good people of Hondo tell those atheist buffoons
to go “fuque” themselves!

These Atheists are so trying to put their ” Will,” on the other people. If they don’t want to have a ” Faith,” that is their choice. They have no right to ” Attack,” people who do. What are these Liberal/Progressives/Communist, going to do when the Islamic ” Nuts,” start putting up signs ? We have much, much, much more important situations to deal with in this Country than this.

An interesting account of Vidor can be read here.