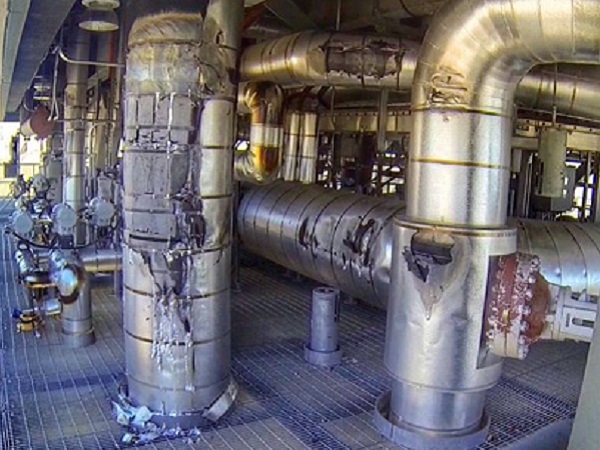 The Ivanpah Solar Electric Generating System, the world’s largest solar plant, has had its share of troubles, including reports that it was scorching birds that flew over it, that it wasn’t producing the energy it was projected to produce, and that it was in dire financial difficulty.  This week may well top all of that . . . the solar plant set itself on fire.

A generating tower at the world’s largest solar energy plant was shut down Thursday after a mirror misalignment caused sunlight to burn through electrical wiring and start a small fire, according to officials.

The blaze at the Ivanpah Solar Electric Generating System in the Mojave Desert broke out around 9:30 a.m., according to the San Bernardino County Fire Department. In a Facebook post, officials said that flames could be seen near the ninth floor of the Unit 3 tower, but that they had apparently died out by the time firefighters arrived.

The plant is located near Interstate 15, just inside the California border southwest of Primm, Nev. It uses enormous mirrors to reflect sunlight to boilers atop three towers. The sun’s energy heats the water to more than 1,000 degrees, creating steam that spins electricity-generating turbines.

Apparently the fire was small enough to be put out by a plant worker manning a fire extinguisher.

William Dusenbury, general manager of Ivanpah, said a plant worker used a fire extinguisher to put out the fire.

Workers are still repairing some of the damaged cables, and there was no estimate on when the tower would be back online, he said.

Only one of three towers is currently operating, with the fire shutting down one and another undergoing maintenance, Dusenbury said.

Maybe it was trying to commit suicide?

It should want to kill itself. Have you ever been to the Mojave Desert?

I kinda liked it. Very quiet. Lots of geologic strata, sand dunes, salt flats holding a surprising amount of water, and some goddamn fast lizards. Quite a switch from the usual American eastern temperate rain forest. Aside from the road, no signs of humans; at least while I was passing through—maybe they hid when they saw me coming.

Used to hike there quite a bit. Learned a healthy respect for how easy it is to underestimate distances — objects would appear closer than they were because like at sea there were no intervening objects to give perspective.

Have you ever been to the Mojave Desert?

Why, yes, as a matter of fact. In my younger days I worked at the (former) power plant in Laughlin, NV. The handrails were so hot that you couldn’t touch them without gloves.

If you use reflective duct tape, not only can you prevent these kinds of accidents, you can also incinerate nearby restaurants, gas stations, and the occasional mail carrier.

Dirty Harry was not available for comment on this subject as he further drives legit business out of Clark County.

The Democrat worship of false gods, in this case solar, just keep giving us fodder, don’t they. Awesome.

Could this be classified as a case of sunstroke?

Was reading a book yesterday – this plant was built/owned by Bechtel and supported w DOE cash grants and loan guarantees – corporate welfare to billionaires at its finest.

There’s a lot of weirdness in the Mojave. From the Reagan roadside attraction of the 20 Mule Team Borax museum to Edwards AFB, to the solar energy platforms and the forest of windmill turbines, strange government installations emitting eerie sounds at night guarded by military patrols, hitchhikers who look like Charlie Manson, bikers from Hell looking like sun-dried, leather-skinned and leather-clad raisins, and a smattering of all manner of human detritus nits, gnats and total losers wandering aimlessly and cluelessly like survivors of the apocalypse, often rambling incoherently to themselves or just talking some really off-the-wall stuff.

It’s one of the most bizarre places one could ever go. And there’s plenty of room for more. San Bernardino County is the largest county in the U.S., but its sparse population belies the intense weirdness level found there.