“I should’ve gone to Bryn Mawr.” 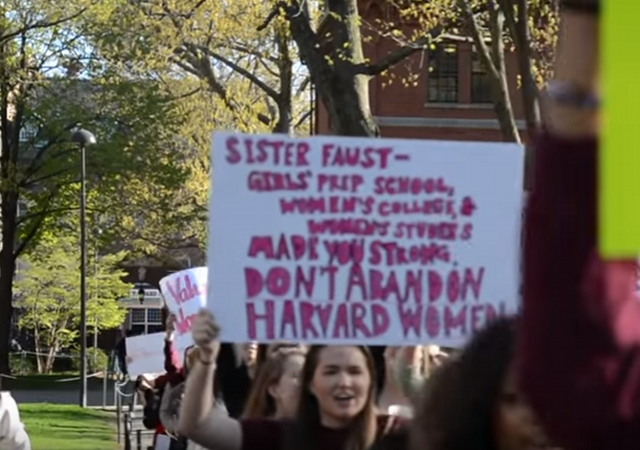 Harvard is instituting a new policy which will punish students who join single-sex clubs by prohibiting them from serving in leadership roles.

While many students are unhappy with the new rules, it was women at the school who recently staged a protest.

Continuing to mount pressure on administrators, more than 200 women rallied in front of Massachusetts Hall Monday against a new Harvard policy that will bar members of unrecognized single-gender social organizations from holding leadership positions in official clubs and receiving top fellowships.

The rally, organized by a group calling itself the Crimson Women’s Coalition, featured four brief speeches from undergraduate women, a march around Harvard Yard, and chants defending all-female organizations.

The event marks the latest in a series of negative responses to Harvard’s newly announced sanctions against single-gender social organizations, which will first affect freshmen matriculating in the fall of 2017. Many graduate leaders of male and female final clubs, national greek organizations, and undergraduate women have expressed frustration and opposition to the announcement.

Women began gathering Monday around 5 p.m., holding signs that ranged in tone from somber to lighthearted. One read “Sexual Assault Is Not Our Fault,” and another read “I should’ve gone to Bryn Mawr,” referencing the Pennsylvania women’s college that University President Drew G. Faust attended.

Here’s a video report the Crimson shot on campus:

It’s a good thing women are protesting this because fewer people would pay attention if men did it. It’s also a bit humorous considering this policy was enacted in the name of inclusion and gender equity.

The irony wasn’t lost on Charles Lane of the Washington Post:

Harvard University’s administrators should read Tocqueville’s book “Democracy in America.” Their institution is not, strictly speaking, a state — it’s more of a state within a state, up there in Cambridge, Mass. In every other way, the school’s new crackdown on fraternities, sororities and a local variant, “final clubs,” epitomizes the clueless illiberalism against which the French sociologist warned.

Harvard has concluded that, in response to sexual assault and other manifestations of gender inequity, it must reform campus culture. Single-gender social organizations are unavoidably discriminatory, President Drew Gilpin Faust noted, “in many cases enacting forms of privilege and exclusion,” contrary to what Harvard stands for.

Being private, self-funded and, technically, off-campus, the groups can’t be banned; but they can, and will, be discouraged and stigmatized.

This sort of madness will continue on American college campuses for as long as progressives rule the realm of higher education. Their quest for equality always delivers the same result.

I guess that all sports teams that have gender exclusion, meaning any intercollegiate sport, should also be subject to the ban.

Absolutely. A member of a single-sex sports team must NOT be allowed to assume a leadership role on a Harvard athletics team.

“Single-gender social organizations are unavoidably discriminatory, President Drew Gilpin Faust noted” …in tandem with the push back against NC’s HB2 and single-gender bathrooms.

“Single-gender social organizations are unavoidably discriminatory, President Drew Gilpin Faust noted, “in many cases enacting forms of privilege and exclusion,” contrary to what Harvard stands for.”

Also, I love all the strong, empowered wimmins that these feminist philosophies are creating….

Waiting for the “I guess it’s alright as long as it’s not just White Males” response.

Meanwhile it is fun watching liberals stubbing their own toes on purpose.

They’re not allowed to….he was a white European male, suitable only for a bulls eye pinned over his heart and on his back.

No, it’s only viewed that way by everyone outside of it. They’re really just fun loving egalitarians…..or so they concluded at last week’s country club happy hour.

Then half the members simply declare themselves female. Problem solved.

Absolutely. So long as they “identify” as the opposite sex at the time they attend the club’s meeting, they’re okay!

Why does it have to be half? One means it isn’t single sex any more.

Humphrey’s Executor has nailed it – those frats just need to take the Bruce Jenner self identification route.

Single-gender social organizations are unavoidably discriminatory, President Drew Gilpin Faust noted, “in many cases enacting forms of privilege and exclusion,” contrary to what Harvard stands for.

“The future demands from us something more than a nostalgia for some rose-tinted version of the past that did not really exist in any case. You’re about to graduate into a complex and borderless world.” -political “scientist” John Kerry

He (Kerry) served in Vietnam.

Sorry to interfere, but it would be more accurate to say “he (Kerry) spent time in Vietnam”. Your wording implies actual service to his country and that is at best a misnomer. This is after all the same person who came back, jumped on the Hanoi Jane bandwagon, and testified before Congress that he and every other Vietnam vet were war criminals.

Wait. I thought ‘diversity’ was a thing at these marxist diverse-i-versity assylums. But now the genital police demand uniformity?

Remember you this here first!

These people are too stupid. Outlaw them. Then people will find a way to make them secret single-gender societies. Turn the frat house into a co-op, and people buy their room and have a home-owners-association. Then try to control their behavior. If the fraternity is a legitimate organization, they will try to comply with the administration. Make them illegal, and they may or may not try to comply.

What is the over/under on how many hours until the President Faust decides that single-gender societies are banned unless the gender is female. What then happens when all the men in a fraternity say they identify as female?

Obviously we need to tax the daylight out of their endowment. Citizens over the age of 72 are penalized for not taking money out of their IRA fast enough. Tax these pampered institutions for being stupid.

If the women-only club admitted biological males who think they’re females, would they still be considered a single-sex club? Would Harvard still subject the members to sanctions? Or would the club point to their male members (denying their transgender identities) and say, “See! We admit men too!”

There aren’t enough mops to clean up the residue from exploding heads on campus.

I am sure this totally inane and worthless advice will fall on deaf ears, as it should.

Don’t be a hater.

Good Idea, you have there.

If the men wore bathrobes and called them dresses, would that make them women? Bed, Bath and Beyond sells shower wraps for men, that look like skirts. Does wearing them make the men women?

For clarification, when you mentioned “male members” , did you mean members who were biologically men, being born with a penis, or does “male members” actually mean their male member, that is, that which makes them a male? Seems a little coded.