An “apology” without using the word? 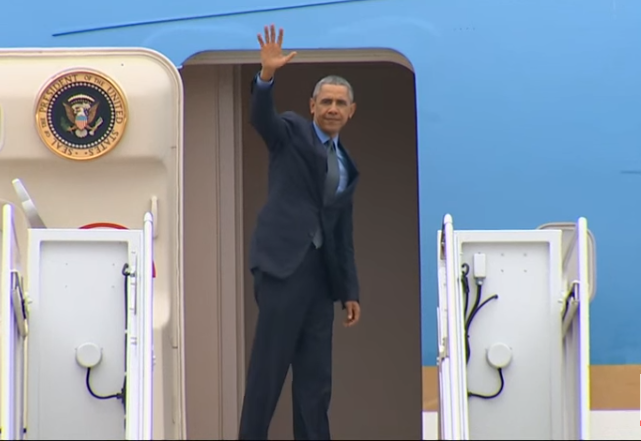 The White House said people should not view President Barack Obama’s visit to Hiroshima, Japan, as an apology after they announced he will become the first sitting president to visit the city since the U.S. dropped an atomic bomb on it in 1945.

White House Press Secretary Josh Earnest told reporters that if anyone does “interpret it that way, they’ll be interpreting it wrongly.”

Wrongly? So Obama won’t say the word “apologize,” but is it effectively an apology?

Benjamin Rhodes, President Obama’s national security advisor for strategic communication (who has his own credibility problems), reflected on the decision in a blog:

He will not revisit the decision to use the atomic bomb at the end of World War II. Instead, he will offer a forward-looking vision focused on our shared future.

That commitment has guided our efforts to promote non-proliferation and nuclear security — a theme at the heart of four Nuclear Security Summits that the President hosted — and to take concrete steps to reduce the role of nuclear weapons in our security and in the policies of other global powers.

Finally, the visit will also symbolize how far the United States and Japan have come in building a deep and abiding alliance based on mutual interests, shared values, and an enduring spirit of friendship between our peoples.

Despite these words, some in the administration who believe the Japanese will take President Obama’s words as an apology. Jeffrey Hornun, Security and Foreign Affairs fellow at the Sasakawa Peace Foundation USA, said if he makes a speech “he would be in danger of his words being misinterpreted, politicized, and over-analyzed as pundits debate what he said, what he should have said, and what he did not say.”

President Obama received the 2009 Nobel Peace Prize in 2009 after he said he wanted to reduce nuclear weapons during his presidency. Yet, the U.S. signed a landmark nuclear agreement that could allow Iran to develop nuclear weapons. The regime has already fired off missiles since October 2015, which has “raised U.S concern that Iran wasn’t abiding by” that agreement.

Of COURSE, he will apologize. He has not properly humiliated America in the Far East yet – he has normally confined our humiliation to Europe and the Middle East. Time’s running out, he’d better get cracking.

I wonder if North Korea needs an apology from us while he’s close?

Or Barracula’s moonpony and unicorn version of a reality that will never again exist.

It’s not thinking for them it’s reflex. They cannot stop themselves.

His statement is technically true, but completely false. The word “Apologize” will not show up in his speech, which is true, because the teleprompter writers will be *very* careful to avoid that specific word. Look for “Regret” or “Sympathy” or even “Never happen again” to be inserted in its place, repeatedly.

Then we’ll see a clarifying press announcement “clarifying” the situation; the President didn’t mean to apologize, he meant to grovel.

Dear Mr. Japanese guy in charge of Japan and stuff, we’d like to apologize on behalf of Americans and all other people that you tortured and murdered that we didn’t bomb Hiroshima and Nagasaki years earlier to discourage your power-mad tromping of people across the Pacific. Apparently, nuclear physics is hard.

We would like to encourage you to not start wars with us in the future, mkay?

Since most Japanese military records on the killings were kept secret or destroyed shortly after the surrender of Japan in 1945, historians have not been able to accurately estimate the death toll of the massacre. The International Military Tribunal for the Far East estimated in 1948 that over 200,000 Chinese were killed in the incident.[11] China’s official estimate is more than 300,000 dead based on the evaluation of the Nanjing War Crimes Tribunal in 1947.

That’s just the Rape Of Nanking. Most deaths were one killing at a time. Many decapitations by sword, for “practice”.

Of course Obama is sincere in wanting to rid the world of nuclear weapons. But he wants to see Iran get rid of Israel first.

Seems to me that Barry apologizes to nearly everyone in the world except for the American people, whom he still delights in screwing over.

As others have said, he won’t say the word ‘apologize’, but I’d bet he’ll say it was a ‘bad/unfortunate/regrettable decision’ to drop the bombs.

I think the Nobel Peace Prize committee should apologize to the world.

Military historians believe that civilian deaths in Japanese occupied territories was upwards of 120000 per month.
Without the bomb the war was estimated to go to the spring or summer 1946 . Civilian and military deaths were estimated at over 1 million for the first invasion in Nov 1945 alone.
We have nothing to apologize for.

I think that there was also discussion and plans to resort to gas warfare if the invasion of Japan had gone badly. The Japanese plan was protracted guerrilla warfare that could have lasted at least a decade. While many point out the Russian invasion of Manchuria as a major factor, Stalin already knew the US could bring Japan to its knees one bomber/one bomb/one city at a time with impunity. No one talks about the lingering deaths from the fire bombing of Tokyo that initially burned to death 100,000 Japanese. War is supposed to be hell…. they started it… we finished it.

It is important to remember that AFTER the bomb dropped on Hiroshima the Japanese Ruling Council voted to continue fighting the War.

This. My dad was flying a bombing mission over Kagashima on August 6, 1945. He actually saw the Hiroshima mushroom cloud. His log book shows four more missions against Japan following that date.

In the 2 days immediately after the Hiroshima bombing, many in the government refused to believe a single bomb from a single plane could have done that. After Nagasaki, Hirohito overruled them, and they all accepted his decision. Some more “ardent” junior Army officers disagreed and tried to kidnap the Emperor. Fortunately for everyone, that night a B-29 raid foiled their plans.

Estimates of casualties in an Allied invasion of Japan vary, but are horrendous in comparison to the total deaths and injuries of Hiroshima and Nagasaki. The casualties inflicted by the firebombing of Tokyo by non-nuclear weapons could be expected in other Japanese cities if the war continued after August 1945.

Of course BO is going to apologize… and we will still be waiting for Japan to apologize for their treatment of POWs during WW2.

There have been apologies offered by an Ambassador and Foreign Minister. Mitsubishi has also apologized, but but I’m not aware of other companies that profited from slave labor having done so.

My father was among those POWs in Japan saved by those bombs.

Of course he will! Is there any doubt?

This fires me up to no end. My grandpa was in the 86th Division in WWII staging to invade the Japanese home islands (the 86th was to be in the first wave at Kyushu) when the bombs were dropped on Japan. If it wasn’t for Truman deciding to use the bomb millions of Americans (and Japanese) simply would not be alive today. Now Obama deems it necessary to apologize. Absurd.

I’m aware of the Ambassador’s apology regarding Battan. Was thinking more of the slave labor aspect but realized that I didn’t state that in the reply.

I know that’s been a sore spot for many POWs. Members of POW organizations have stressed that they aren’t interested in money from those companies, just apologies.

Nothing he will say or do will be worse than Nixon bowing to the man that ordered the attack on Pearl Harbor.

Is the Ambassador Caroline Kennedy going to be there when he apologizes? I understand her dad was a WWII vet…