Virginia’s Democratic Governor is Under Investigation

Virginia’s Democratic Governor is Under Investigation 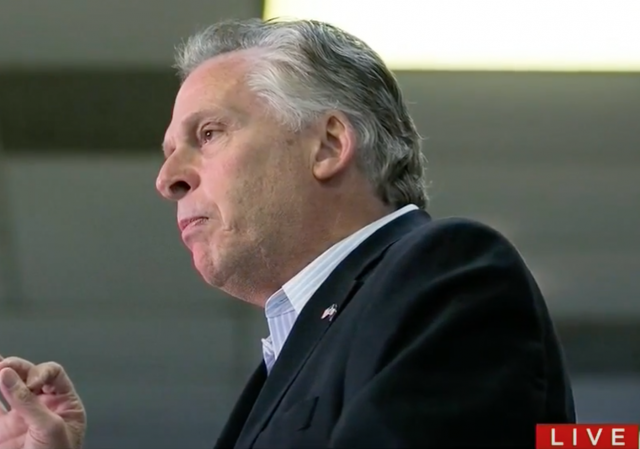 Virginia’s Democratic Governor Terry McAuliffe is in a bit of hot water.

Monday, CNN was the first to report McAuliffe was under the FBI and Justice Department microscope. At the center of the investigation — whether certain donations to his election campaign were extra-legal.

McAuliffe served as a board member for former President Clinton’s Clinton Global Initiative. His time there is also part of the federal investigation.

The investigation dates to at least last year and has focused, at least in part, on whether donations to his gubernatorial campaign violated the law, the officials said.

McAuliffe wasn’t notified by investigators that he is a target of the probe, according to the officials.

“The Governor will certainly cooperate with the government if he is contacted about it,” said Marc Elias, attorney for McAuliffe campaign, in a statement to CNN.

As part of the probe, the officials said, investigators have scrutinized McAuliffe’s time as a board member of the Clinton Global Initiative, a vehicle of the charitable foundation set up by former President Bill Clinton.

There’s no allegation that the foundation did anything improper; the probe has focused on McAuliffe and the electoral campaign donations, the officials said.
Spokespeople for the Justice Department and the FBI declined to comment.

Among the McAuliffe donations that drew the interest of the investigators was $120,000 from a Chinese businessman, Wang Wenliang, through his U.S. businesses. Wang was previously delegate to China’s National People’s Congress, the country’s ceremonial legislature.

“Neither the Governor nor his former campaign has knowledge of this matter, but as reported, contributions to the campaign from Mr. Wang were completely lawful,” said Elias.

Waiting for the Clinton family tie-in? Here you go:

Wang also has been a donor to the Clinton foundation, pledging $2 million. He also has been a prolific donor to other causes, including to New York University, Harvard and environmental issues in Florida.

I wonder how long before his body is found in Ft Marcy Park?

McAuliffe and Clinton in prison orange!

Wouldn’t it be ironic if the nail in his coffin is found in an email gotten off of Clinton’s email server?

With this news, I’m happier than words can express.

He was a crook – a known crook – before he was elected. And, like this fiasco of a presidential election, no one seemed to care; the media covered for him; the Democrat Party PROMOTED and SUPPORTED him (no surprise there!); and he has done his job and turned VA vivid BLUE (can you say 200,000+ – with NO discrimination over what crimes they were convicted of – convicted felons given voting rights and jury-sitting privileges?!).

I hope he gets in court, is found guilty, and rots in jail.

But, like HildaBeast and the rest of this rogue’s gallery in the Obama administration…..the MSM will cover for him, the wagons will be circled, and I doubt that he will even feel a hint of heat…..

WE cared. The GOPe did not.

Yeah, Trump which donated to McAuliffe. Trump that said “I’ve always liked Terry” (and no, that is not ancient history, that is about half-year ago).

You can spread your manure all you want, just don’t expect anyone not to sense the stench.

So what? obama will just add his name to the pardon list.

Worst VA governor of my lifetime, and anyone who thinks he is not a corrupt crook hasn’t looked at him that much.

Clinton and Trump like and support him, of course.

Not to worry! It’s just an audit of his finance practices, and not a real criminal investigation!

As I told my sister in Virginia before the 2013 election: “I know you’re no conservative and don’t like what Cuccinelli has done as AG, but you KNOW McAuliffe is a crook, right?” She could not deny it – voted for him anyway.

The only surprise here is that it took so long.

And legions will do the same for Hillary, also a known liar and crook. What amazes me is somehow Democrats feel like they’ve got a monopoly on virtue despite pulling the lever for liars, crooks and thieves. Hillary is the most transparently dishonest politician to ever run for office. Everything she publically stands for she has ignored and violated in her private life. The hypocrisy is breathtaking. And, yet, the stupid people swallow the swill she is pitching.

At least now he can vote in Va due to an EO signed by Governor McA ,oh ,right