Yes, he asserts, Trump can win 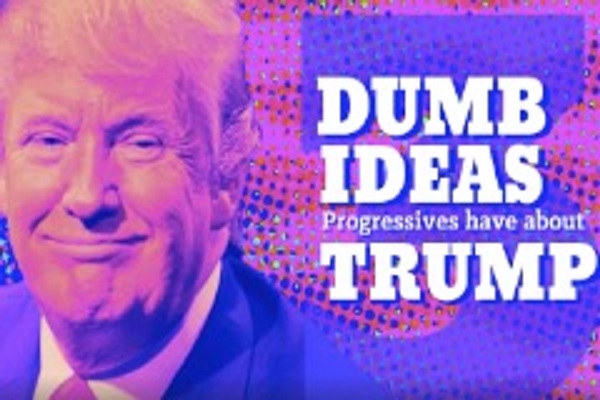 Disgraced communist and former Obama “Green Jobs Czar,” Van “Cash for Clunkers” Jones, hasn’t been resting on his laurels since his abrupt 2009 middle-of-the-night departure from the Obama administration. He was busy serving at the front of the progressive campaign to diminish and demonize the Tea Party into obscurity, and he has now, apparently, turned his attention to Donald Trump’s candidacy and is warning progressives not to underestimate The Donald.

1. Trump will self-destruct
2. He’s bad on policy, so he will lose
3. Demographics will save us

These are the same things both the GOPe and Constitutional conservatives said / thought about Trump, and they—and we—were wrong.

Each of Jones’ points is, or has thus far proven to be, spot on.

Trump won’t self-destruct in the general not only because he gets social media but because Hillary is a rich minefield of actual controversy, corruption, and uselessness. Trump won’t have to drop hints that he heard that Hillary’s mother was holding a lit match near the hydrogen reservoirs of the Hindenburg seconds before it erupted in flames; Hillary is a mess, and Trump is hitting her hard, and with precision in this case, by calling her out on her complicity in covering up her husband’s affairs, bullying the women into silent submission, and at least one case of alleged rape.

Hillary’s “woman card” is out the window, and she knows it.

Former Michigan governor and current Hillary surrogate, Jennifer Granholm sounds like she hasn’t been paying attention for the last six or eight months because that dog won’t hunt, and without her vajayjay card, Hillary is going to find herself truly struggling in the general election should she be the Democrat nominee.

Van Jones’ second point, that Trump is “bad on policy” and that this doesn’t matter, is equally accurate. In the video above, he notes, astutely, that people “don’t know or understand policy” and, perhaps more meaningfully, that this election isn’t “about”policy.

Van Jones’ third point about relying on demographics is also important because Trump does have the ability to articulate, and be heard, the massive failures of progressive policy with regard to minorities and the middle classes.

There is no indication as yet that Hillary or other progressives intend to take Trump’s candidacy or Van Jones’s warning seriously, however.

OTOH: Even some of those who like Mr. Trump, have some hesitation about whether he is the correct person to champion, if that’s the correct term, the present uneasiness with mainstream GOP, the so-called GOPe bunch.

JAG has said, several times, that it’s not sure that Donald J. Trump is the correct person to represent Trumpian concepts. Yet, right now, Trump’s on his way to the GOP nomination. And, I do believe that Trump can win the election this November, especially beating Clinton soundly; so help us God.

So, finally, even that old Commie Van Jones seems to recognize the truth regarding this election, that it’s almost like a voter revolt; even were the person winning seems revolting to some Republicans, which he is not to me.

Anybody else notice how Megyn Kelly asks the same type of squirmy questions of the Hillary campaign as she did of Trump? And that she follows up? Does anybody imagine that she would be less pointed with Hillary?

Van Jones lists three specific “dumb ideas progressives have about Donald Trump.”
…
2. He’s bad on policy, so he will lose

He’s cheating; that’s two things Progressives (as well as the NeverTrump crowd) are wrong about. He’s trying to slip in “he’s bad on policy” as if it’s a given. If everything Progressives thought were “givens” were facts, we’d all be living in the Soviet Socialist Paradise of Fomerly Oppressed Special Interest Groups right now.

I wish people would stop referring to these #NeverTrumpers as “Conservatives”. Regardless of their past proclivities, real conservatives do not throw an infantile temper tantrum and take actions which will facilitate takeover of the SCOTUS by vile left wingers like Clinton and Sanders.

Communist Van Jones ends begging (3:40) people to “share this video with your friends”. Mission Accomplished at Legal Insurrection, Van. Wow. Anything else we can do for you to help Communism, Mr Jones?

Sure, I’m disappointed with these Benedict Arnolds of conservatism. I used to respect some of them. But they have exposed themselves as being a mile wide and a quarter inch deep in terms of their emotional maturity and intellectual ability. Never again, Asshats. Spartans do not help Persia take Sparta.

I am not NeverTrump. I do not support Trump, but I do not preclude the possibility of voting for him in the General Election – I have not yet decided. That said, posts like yours only make deciding to vote for Trump more difficult.

You wrote, “…real conservatives do not throw an infantile temper tantrum and take actions which will facilitate takeover of the SCOTUS by vile left wingers like Clinton and Sanders…” I do not disagree. Then again, ‘real conservatives’ do not put forth as their nominee, a man who’s record is no less vile and leftist – and who offers nothing but his uncorroborated, and often contradicted, word that he has moved to the right.

You also wrote, “…Actual conservatives are working to defeat Hillary Clinton/Bernie Sanders, not puff up Van Jones…” Again, I do not disagree. However, I must ask, where were these ‘actual conservatives’ in 2012? I ask because of the self-identified conservatives, who sat out the 2012 election (or voted 3rd party), because they were tired of, “Voting for the lesser of two evils.” All of those, with whom I am personally acquainted, are now strong Trump supporters – and making the same case you make.

Their words ring hollow, as do the words of someone who uses terms like ‘real conservatives’, ‘actual conservatives’, and ‘Benedict Arnold’, after they helped nominate a New York liberal – based on only their unsupported faith that he will be any better than the Democrat nominee.

Do you actually want Trump to win? This is a serious question – because if you do, you’ve chosen a strange way to express it.

Posts like yours are unlikely to sway any undecided voters to Trump’s side. OTOH, they may be a factor in preventing their eventual decision to go with Trump.

On LI, the most vigorous Trump supporters spend most of their words describing how awful Hillary is and would be as president. They spend little time extolling any supposed Trump substantive virtue. This may be necessitated by Trump’s taking different positions on the same issue, then topping off the uncertainty by saying that whatever he says is just a suggestion, anyhow, because he is not yet president. This all makes it tough to become a convert.

It’s hard to know who you refer to, you write so badly.

But you lie like its your job, which I don’t doubt, mole-troll.

One of your persistent lies is the one about an “infantile temper tantrum” or “butt hurt at losing”.

Anyone can know this is lie by recognizing that many people who decided they could never vote for T-rump (Collectivist fraud, New York City) came to that conclusion…

1. on cold, hard RATIONAL analysis of the FACTS

2. regardless of anyone else running AND

3. months and months ago, prior to there being anything to have a “tantrum” about

Spartans didn’t support Persians, regardless of the Persian lying to them about who and what they were. And they weren’t shamed for being Spartans by some asphole who’d been a Persian supporter in their midst for months.

“Trump does have the ability to articulate,…”

I liked the Donald way back when he was doing his WWE Wrestlemania stchick – those grunts and groans and taunts were articulate alright; and the sucker punch and body slam to Vince McMahon were eloquent. And he was profanity (er, profoundly) eloquent on those Howard Stern interviews – mocking J-Lo’s ass as he did made me laugh my ass off.

And sure, he’s as articulate insulting and name calling as a NYC Cabbie; but really – do we want him as the face of our nation? To have him in future history books alongside Washington, Lincoln, Eisenhower, Reagan? Commander in Chief Trump? Representing us in the world?

Yeah, Hillary sucks, but we can survive a term with her as President; it will take ten presidential terms to repair our reputation and credibility in the world with a Clara-Belle Clown like Donald in the Oval Office.

This is not meant as criticism of those who support Trump’s policies – I favor many of them. But he’s the wrong person to drive the bus, likely to fall off the cliff with him at the wheel.
.

And just how long will it take to repair the damage if Hilary (or Sanders) appoints one or two hard left justices to the Supreme Court. Other federal courts will be damaged too.

A true America First foreign policy will cause ’em to whine but do little except whine.

After eight years of Obama, you’re worried about how Trump would demean the presidency?

I don’t think that we can survive a term of Hillary as President. It will take a single Justice to flip the Supreme Court, and that probably means good bye 2nd Amdt, and probably part of the 1st (remember – Citizens United was about an ad attacking her). Last week, a federal court said that the Obama Admn was spending money not appropriated by Congress in supporting ObamaCare. Likely to be reversed in the Dem paced Court of Appeals, which leaves SCOTUS. A tie there is as bad as a loss, resulting in the precedent that Congress no longer has the power of the purse, but instead, the President does.

When Clinton was Sec of State, she, her family, and their family foundation became fabulously wealthy by the sellng of official favors to all comers around the world. We are talking the shift to an almost rabid pro-Muslim foreign policy (including support for the ill fated Arab Spring), as well as letting the Russians buy control of 1/5 of our uranium supply. The list goes on. Do you really think that this woman, who has been breaking laws since at least her cattle future days to make money and get rich, believes that they now have enough of it, and will execute the laws of this country dispassionately, without regard to their net worth? I don’t think so, and believe that anyone who does is naive, and maybe intentionally so.