Does this count as social justice or just regular justice? 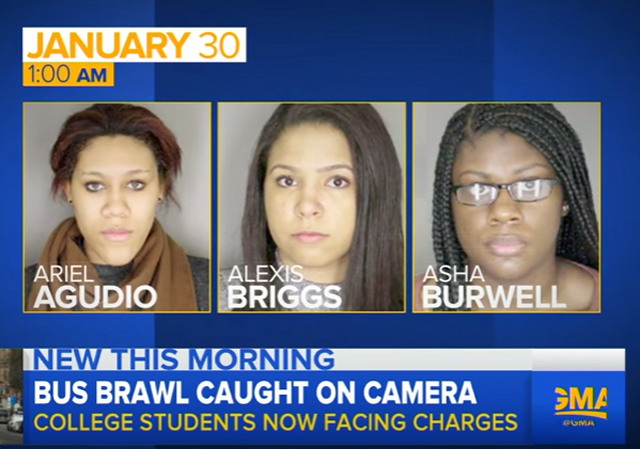 Last week we covered the story of three students at the University at Albany who were facing charges for staging a race hoax. The school has now expelled two of the students and suspended another.

Two black female college students who claimed to be victims of an assault by a group of white men and women reportedly were expelled from the University at Albany.

University at Albany President Robert J. Jones said in an email to The Albany Times Union Thursday that Ariel Agudio and Asha Burwell were dismissed from the college. A third student, Alexis Briggs, was suspended for two years.

Investigators say a review of multiple videos of the incident showed no evidence the women were victims of a crime or subjected to racial slurs. In fact, police said the women were the aggressors, assaulting a 19-year-old white woman.

Police said surveillance and cellphone video, as well as eyewitness testimony, contradicted the women’s account. The white men Agudio, Burwell and Briggs claimed assaulted them were actually trying to break up the fight.

Will Hillary Clinton issue an updated tweet? Don’t count on it.

There's no excuse for racism and violence on a college campus. https://t.co/ADVghl4iEv -H

Why is no one asking the most fundamental question of all – “If racism is so prevalent and such a huge issue, then why are there so many cases of race hoax’s being perpetrated in recent years?”
>
The answer to this question should be obvious. There is no racism and those who push the racism agenda are so desperate for examples to prove their point that they are forced to create it.
>
Now the greater question is why is it taking so long for everyone to get with the program and understand that if racism hoaxes are necessary to keep the movement alive, then why do we still believe in the racism they claim to exist? Even more importantly, what does this say about the black community who takes these hoaxes along with Black Lives Matter, Trayvon Martin, and other examples that are all shown to be either nothing or events initiated by black violence against the police, whites , or whomever, and elevate these well known and well documented lies up to being sacred events that proves their point? These should all serve to prove how they have no point other than to be angry and that they are grasping at straws in order to find someone to blame other than themselves.

Racism IS prevalent, just not the kind those people usually squawk about. See cindelicato below.

Have I got this straight? Three people accuse people of another race of a hate crime. Evidence supports that those three were were the aggressors, in particular, against a person of the accused race.

How is that not a hate crime in itself? The 19 year old woman should be given her day in court for the hate crime perpetrated against her.

This is justice. If you put the adjective “social” in front of virtually any noun, it negates the meaning of the noun. While social drinking (“drinking” is actually a gerund, which functions as a noun) is drinking, social justice isn’t justice, social life isn’t real life, and social science is most definitely not science.

Maybe, just maybe, this will “send the message” that actions have consequences and we’ll start seeing less of this sort of thing.

Ah, who am I kidding? Liberals/SJWs don’t believe in consequences. At least, not those caused by their own actions. It’s always somebody else’s fault.

Oh no, they learned there are real world consequences to their actions? That’s not what college is supposed to teach.

Find them a safe space, now!