The road to the Iran nuclear deal was paved with lies 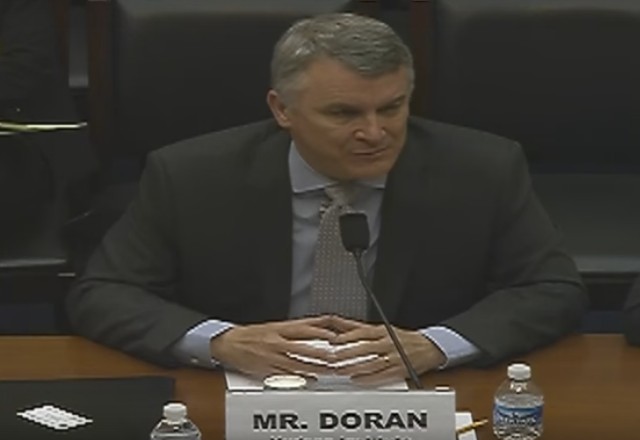 In his testimony last week before the House Committee on Oversight and Government Reform, concerning the grand Iran deal deception described in a recent New York Times article that was carried out by Obama and Deputy National Security Advisor Ben Rhodes, Michael Doran, a senior fellow at the Hudson Institute, laid out five areas where the White House deceived the American people.

First, Doran in his testimony established that even before he became president, Obama had expressed an interest in rapprochement with Iran. He cited former CIA chief and Defense Secretary, Leon Panetta, from The New York Times expose on the echo chamber saying that the administration knew that “They’d have gotten “the [expletive] kicked out of them,” if they had been upfront about their intention to engage Iran.

Doran summed it up:

To avoid that fate, Obama proceeded surreptitiously. In 2012, he opened secret, bilateral negotiations with the Iranians on the nuclear question in Oman. Simultaneously, he quietly brought his policies in Lebanon, Iraq, and, especially, Syria into alignment with Iranian interests. In November 2013, the administration announced that it had reached an interim agreement on the nuclear question. Shortly thereafter, the existence of the secret Oman channel became known, but few observers understood just how active the Oman channel had been, or what it portended for the future of American foreign policy.

Next, Doran explained the five points of deception and their significance, using his terms:

That Iranian President Hassan Rouhani is a moderate is something that could have been disproved by simply looking at his past history in the archives of The New York Times. However it was an essential part of the deception. By making the deal appear to be taking advantage of a historic change in Iran, that would lead to a “kinder, gentler Islamic Republic,” Doran writes, “the administration has managed to alleviate concerns that the deal it struck with Tehran will completely remove the most meaningful international restrictions on Iran’s nuclear program in just ten years’ time.”

This is related to the first item. If Rouhani presented an unprecedented opportunity for the nuclear deal, then engagement with Iran should have started in August 2013 when he was inaugurated. In fact it began even earlier. In The New York Times article, Doran observes, “Samuels’s interviews
with, among others, Jake Sullivan, a principal participant in the Oman negotiations, indicate that the Americans had arrived at the outlines of a deal with the Iranians well before Rouhani even took office.” (Obama was already pushing the Europeans to allow Iran to maintain its enrichment capacity as early as 2009.)

On issues such as shutting Iran’s Fordow uranium enrichment facility, forcing Iran to come clean about its past nuclear work and keeping sanctions on Iran for its ballistic missile work, the administration deceived the public about what it was up to. When word leaked out that the administration was making one concession or another the administration said to wait until there’s a final deal. For example, Doran quotes Obama in March 2015 (a few weeks before the announcement of a framework deal), “let’s wait until
there’s actually a deal on the table that Iran has agreed to, at which point everybody can evaluate it; we don’t have to speculate.” The once the deal was announced and speculation was no longer necessary, Obama said, ““The choice we face is ultimately between diplomacy and some form of war — maybe not tomorrow, maybe not three months
from now, but soon.” The point was to preempt any serious discussion of the particulars of the deal.

Obama’s rapprochement with Iran on the subject of Iran’s nuclear program was part of a more general realignment with Iran. An editorial in The New York Times in January of last year asserted “the United States and its allies are going to have to live with [Assad,]” an endorsement of the administration’s apparent retreat on insisting that Assad must leave for their to be any hope of peace in Syria. Not insisting that Assad be removed from power, as Doran observed, was a sign that the United States “[recognized] the legitimacy
not just of Iran’s nuclear program but also of its interests in the Arab world.”

Doran cites Frederic Hof who, following The New York Times expose of Ben Rhodes, observed, “To complicate the ability of Iran’s man in Syria [that is, Assad] to commit war crimes and crimes against humanity would have placed at risk nuclear negotiations aimed ultimately at dissolving American relationships of trust and confidence with key regional powers.” Hof wasn’t just any critic of the Obama administration, but rather someone who had served as “point man” for Syria in the administration from 2009 to 2012.

Doran notes that the administation led as a whispering campaign faulting American allies such as Turkey, Saudi Arabia and Qatar for supporting ISIS. But there was no similar campaign to blame Iran and Russia for “fueling the murder machine of the Syrian dictator, Bashar al-Assad.”

But “Rhodes has directed his most venomous whisper campaign of all at Israeli Prime Minister Benjamin Netanyahu,” who like America’s Sunni allies,  wanted to see Iranian regional ambitions constrained, not encouraged. Doran summarized the form of attack against Netanyahu:

The preferred mode of attack, however, is asymmetric—to focus as little as possible on the differences between the two men on Iran and to stress, instead, their disagreements over Israeli-Palestinian diplomacy. Rhodes and his echo chamber spin a tale casting Netanyahu as the villain of the Middle East peace process, an arch nationalist with unseemly ties to the right wing of the Republican Party who refuses to make the necessary compromises to bring about an historic reconciliation with the Palestinians.

(We covered the assaults on Netanyahu is more detail here.)

Doran’s goal wasn’t just to expose the administration’s deceptions but to offer policy recommendations to avoid such future manipulations. He suggested that Congress rein in the National Security Council (NSC). The operation of the council under Rhodes and Obama, strayed from its true purpose. Rather than having Congress exercise direct oversight over NSC, Doran’s recommended limiting its budget and restricting how many people it can detail from other executive departments.

Below is a summary of these five deception Doran offered at the hearing.

We all know Obama lied. But too many of us won’t admit the terrible truth why.

When I read of traitorous actions by obama’s WH I am sick. But then I remember that he was RE-ELECTED! Does that not tell all you need to know? This country is going down like the Titanic and if hillary gets elected we are finished.

Despite the rampant, serial, and pathological lying of Obama and those in his administration, despite the corruption of this administration so overt that investigation blocking computer crashes have become comically common, despite the incredible and predictable failure of Obamacare, despite the serial failures of this administration so complete that successes are nonexistent and only exist by further lying and the redefining those measuring devices used, and despite an economy that remains in a recession/depression where nothing creating the crash of 2008 has been fixed while none of those crooks who were responsible for the crash were ever indicted (let alone tried and convicted), the MSM remains completely in the tank for this administration. They have become the loyal lap dogs of this administration spewing propaganda instead of news and routinely defend that which cannot be defended.
>
The question I have is why has the MSM sold their very soul to this administration and why has the MSM decided that the needs and desires of this administration outweigh the needs of the nation? The one major benefit from the last eight years is that students no longer need to ask the question of how a supposedly free nation with supposedly a free press could allow for a person such as Adolf Hitler or Hugo Chavez rise to power.
>
Of course, there is one other obvious question that needs to be asked. That question is that given all the lies and failures of the last administration, why would people want to elect Hillary with her long and storied history of lies, scandals, lies, clearly illegal behavior, lies, and so forth, as well as why the MSM would choose to blindly support her campaign? It would seem that the only attribute that the MSM excels at would be their blind devotion to a person and political party no matter how flawed that person or party might be.

The secular Pro-choice doctrine is the equivalent of Islam’s Taqiya.