How Anxious is Obama to Make a Deal with Iran?

How Anxious is Obama to Make a Deal with Iran?

Is the Obama Administration so anxious to make a deal with Iran that it doesn’t matter what the terms are? 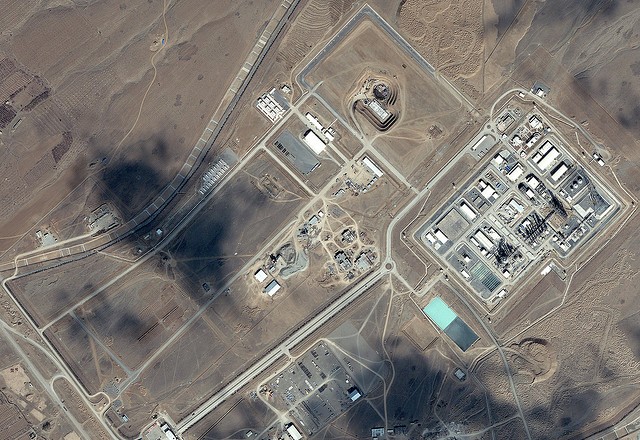 How much does the Obama administration want a deal with Iran? The news tells me: quite a bit.

Last week, Charlie Rose interviewed Secretary of Defense Chuck Hagel. I found Hagel’s remarks about Iran (initially with regard to Israel) to be very telling:

SEC. HAGEL: Sure there are differences, but every nation has differences.
ROSE: Speak to the differences of Iran.
SEC. HAGEL: That’s an area where I think we’re coming together. Prime Minister Netanyahu and I had a good conversation about that as did Defense Minister Ya’alon and other leaders. I’ve met with President Peres. They have always been very skeptical the Israelis as you know of this six-month effort to try to — the P5+1 to find some diplomatic resolution of the first step of the nuclear.
Now, there are other issues that we’re going to have to address — the missile capacity that the Iranians have, their state sponsorship of terrorism — but we’re focused on nuclear now. I think the Israelis have — they still don’t — I don’t think agreed totally with what our approach is.
But they’ve given us, for them, an allowance here to try to produce some kind of way out of this, which we talked about this and I think that’s…

Hagel, and I’m assuming that here he’s reflecting administration policy, believes that making a deal on Iran’s nuclear program will open up Iran to moderate in terms of its ballistic missile program and its support of international terror.

By Hagel’s admission, the administration would appear willing to overlook one of the surest signs that Iran is lying about the peaceful nature of its nuclear research, in order to reach a deal!

Even as the P5+1 negotiations continue with Iran, the administration is reportedly looking to deploy a secret team to negotiate separately with Iran. The idea would be to make an agreement with Iran, regardless of the objections of other Western governments.

That the administration would be more willing to compromise than other members of the P5+1 just to make a deal is not new.

In a paper released last year by SIPRI, a Stockholm based think tank focusing on disarmament, its researcher wrote:

However, it appears that some EU members were also worried about the possible drawbacks of full US engagement.There was a concern that a more prominent US role might reduce Europe’s leverage to prevent a military escalation. At the same time, some EU states feared that the USA might shift the goalposts for a diplomatic solution. France particularly opposed any softening of policy on Iran. As the Obama administration was becoming privately convinced that the goal of zero enrichment as part of a final agreement with Iran was probably unrealistic, France continued to insist that Iran should not be allowed any enrichment under a future agreement.In June 2009 the British Minister of State for Foreign and Commonwealth Affairs, Bill Rammell, emphasized that while the UK welcomed Obama’s commitment to engage in a dialogue with the Iranians, this was ‘not an open-ended offer’

Even at the beginning the President Obama has been more anxious to close a deal with Iran than even many European countries! Remember, too, this was in 2009, when Ahmadinejad was President and there was no pretext of moderation.

And now even with a supposed moderate moderate, Hassan Rouhani as president, is it really Rouhani who calls the shots? Is there any indication that a deal over Iran’s nuclear program could lead to further deals with the regime?

Iran’s true leader is the Ayatollah Khamenei and in a recent speech he didn’t express much enthusiasm for reaching an agreement with the United States.

According to the Daily Caller, Iran’s Supreme Leader Ayatollah Khamenei declared an ongoing conflict with America:

In response to a question by a parliamentarian on how long this battle will continue, Khamenei said,“Battle and jihad are endless because evil and its front continue to exist. … This battle will only end when the society can get rid of the oppressors’ front with America at the head of it, which has expanded its claws on human mind, body and thought. … This requires a difficult and lengthy struggle and need for great strides.” 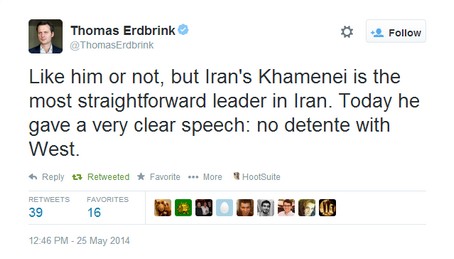 You might think a revelation like that is important, but Erdbrink didn’t bother to report the speech for the New York Times!

Every bit of evidence suggests that Obama wants a deal with Iran. Very much. Unfortunately it isn’t as clear that the administration wants to prevent Iran from being able to have a nuclear breakout or that such a deal would bring about a new, moderate Iran.

Remarkable and I am sure accurate job of parsing what sounds to me like a man and a so-called administration flat-lined on prozac.

It looks to me like Obama is desperate for a big foreign policy victory and desperate to augment his ‘legacy’, even to the point of placing other countries at great risk – look what he did to eastern Europe with the missile giveaway just to appease Russia. Given Obama’s record of ineptitude on foreign policy, he is likely to get played yet again and people are going to get hurt.

Is there not one responsible Democrat in DC who can take Obama aside to say, “dude, hold up, let’s talk about this…”?

No – not one responsible Democrat in DC.

Odds are higher that one righteous man could be found in Sodom and Gomorrah.

Interestingly it seems circumstances have twisted and folded to the point where the Ayatollah’s press conferences are holding back Obama from making some monstrous and duplicitous deal with Iran. LOL.

Ayatollah: “Battle and jihad are endless. Death to America, to Zionists, and I heart Hitler.”

Obama: “Please stop making such remarks to the press, Mr. Ayatollah. It’s interfering with my efforts to make under-handed deals that sell out Israel and much of Western Europe.”

I wonder how long that will continue?

Obama is a destructive moron, and the Iranians are acting on that belief. When a man tells you he will destroy your country and you insist on making a deal with him, either you are delusional or you agree with the man’s goals.

Trying to make sense out of Chuck Hagel has always been like trying to bail out a sinking rowboat with a sieve.

But, yes, Obama will make any deal – or no deal at all. In either case he declares success, leaves office, and studiously avoids Israel in case of a mushroom cloud. If there is no bad deal, he will applaud the “process” and hope the “dialogue” continues.

If we had an IQ requirement for voters, there would be no elected Democrats. (Yes, I know Hagel is putatively Republican).