There’s a special place in Hell… 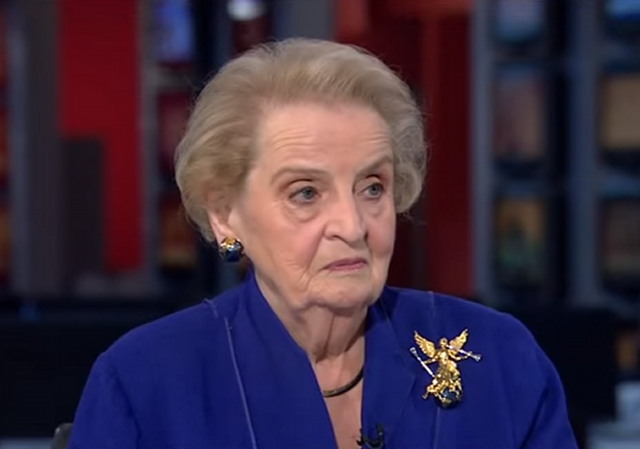 Madeleine Albright is set to deliver the commencement address at Scripps College. You would think that the nation’s first female secretary of state would be welcomed at the women only school but we live in strange times.

Back in April, students objected to Albright for being white, now they’ve decided the real problem is that she’s a war criminal.

Ah May, when flowers are blooming, allergens are wafting and aggrieved college students are mewling about commencement speakers whose politics don’t sufficiently hew to the ultra-liberal standards set by the campuses’ most outspoken activists.

This year some of the loudest cries are coming from L.A.’s own backyard. Scripps, the all-women liberal arts college in Claremont, has secured former Secretary of State Madeleine Albright as its commencement speaker on May 14. From a practical perspective, the booking is quite a coup, considering that Scripps pays next to nothing and the wrangling is done not by the administration but by the students. Nevertheless, members of the Scripps community responded as if Joseph Goebbels had been raised from the dead and charged with the task of inspiring the class of 2016 to follow its dreams.

According to some students, Albright, who served under President Clinton and was the nation’s first female secretary of State, is a war criminal because of decisions she was involved in regarding Iraq sanctions and the genocide in Rwanda. Many haven’t gotten over Albright’s now notorious statement, made during the whipped-up frenzy of a Hillary Clinton campaign stop and widely attacked as an outrage by Bernie Sanders’ female fans, that “there’s a special place in hell for women who don’t help each other.” Albright published a New York Times op-ed not only apologizing for that remark but also contextualizing it in a way that underscored her clear commitment to gender equality.

This either failed to impress or escaped the notice of an op-ed writer in the March 4 Scripps student newspaper, who boiled Albright’s legacy down to “repeated genocide enabler” and a few similar social-media talking points.

Albright’s provocative suggestion in February that there’s a special place in Hell for women who don’t support Hillary certainly has something to do with the protest.

This isn’t the first time Scripps has shown itself to be a hotbed of leftism. In April, Campus Reform reported on a rather unsavory development:

The authors state that the term “Preferred Gender Pronoun” (PGP) should be replaced with “Gender Pronoun” to avoid offending students whose gender identity differs from their biological sex.

“While it may seem new and positive, PGP is actually not a good thing,” they write. “There’s nothing wrong with Gender Pronouns! However once we say ‘preferred’ we’re invalidating the entire idea. How people identify is how they identify; it is not a ‘preference.’”

Another section dedicated to being a “Trans* Ally” prompts new Scripps students to ask for each of their peers’ gender pronouns in order to avoid unwittingly enforcing the gender binary when they interact with others. “Enacting a life of accountability and ownership over your own domination and privileges is the only way you can exhibit allyship,” the guide adds.

The Scripps Survival Guide defines “White Privilege” as “the set of unearned benefits white people gain as a result of systematic racism and discrimination” that “benefits even those white people who are disadvantaged by other forms of institutionalized oppression like ableism, classism, sexism, homophobia, and transphobia.”

The authors add that “asking people of color to educate us about racism,” “asking people of color to absolve us of our guilt,” and “identifying the ways that we are engaging in the perpetuation of white supremacy” are all things that “we need to stop doing right now.” In a section titled “Dear white students,” they elaborate that “[r]everse racism cannot exist because white people maintain power over people of color” and “because there are no institutions that were founded with the intention of discriminating against white people on the basis of their skin [color].”

Are there any home school colleges my sons can attend where they can enjoy the privilege of actually learning???

A few, depending on your sons’ interests.

I can GENERALLY recommend my undergrad alma matter, TAMU (WHOOOOP!!!).

But even there, some colleges within the university are no-go zones. Certain fields are simply gone, in terms of rational thinking.

Have to disagree about Texas A&M University. I still live in the College Station area. I also have undergraduate and graduate degrees from TAMU, but those are from 1984 and 1992 (things were pretty grim back then, and they are much worse now).

The new university President has the proverbial spine of Jell-O and the faculty Senate is the plaything of a pack of miniature Hitlers and Stalins.

Even the presence of the Dixie Chicken and Duddley’s Draw are not enough to make me recommend Texas A&M to any unwary student.

Last year, an A%M student moved to Oklahoma and the average IQ of both states went up.

Truly a shame what’s happened to once excellent teaching institutions. Faculties have become a collective of spoiled children concerned only with themselves. Generations of our children have now been permanently harmed by their creation of entire schools/colleges of totally useless, essentially incestuous academic pursuits spawning other useless incestuous academic pursuits. Getting a Doctorate in Righteous Perpetual Navel Gazing is now the pinnacle of academe.