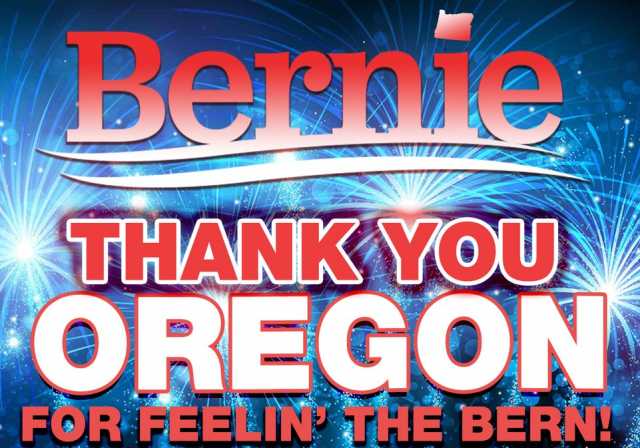 The way I see it, #NeverHillary can truly claim the primary victory in Oregon’s contests on Tuesday.

Tuesday’s contests aren’t likely to change the overall dynamics of the race. Clinton maintains a sizable delegate lead and is poised to become the presumptive Democratic nominee in early June when the final round of states vote.

But her inability to snuff out the Sanders challenge has underscored concerns about her skills on the campaign trail and raised questions about whether the party will unite behind Clinton when she takes on presumptive Republican nominee Donald Trump in the fall.

Trump taunted Clinton about the closeness of the Kentucky race.

“Do you think Crooked Hillary will finally close the deal?” Trump tweeted.

Though at the time of this post was initially prepared, the votes were still being tallied, it looks like the margin of victory was clear for both candidates. 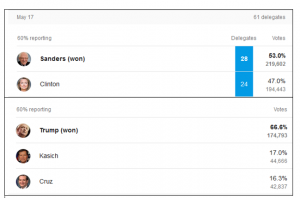 It appears that Sanders’ supporters are far happier with this result than they are with the one in Kentucky.

In fact, the margin of victory in some portions of Oregon are staggering for Sanders.

And despite the fact that Clinton is on track to netting the 2,383 delegates needed to win by June 7th, Team Sanders does not seem all that interested in party unity.

In the wake of a chaotic state convention that resulted in death threats for party officials and vandalism to party headquarters, the Democratic establishment asked Bernie Sanders for his help Tuesday in getting some of his overzealous supporters to stand down. His response: Stick it.

…”The perception that the DNC and other state parties have unfairly favored Hillary Clinton is going to make the reconciliation of Sanders and Clinton supporters nationally and in the states far harder,” said Democratic strategist Simon Rosenberg, president of the NDN think tank. “The DNC should have tried much harder to address this perception early on, as it always had the potential to become a reason for Sanders partisans to question the legitimacy of Clinton’s victory.”

Especially when the victory comes as a result of coin-flips and Superdelegates!

Of course, Trump supporters were no less thrilled with his victory.

As a Californian, I am happy that my vote is still poised to make a difference in one of these contests. As always, I remain #NeverHillary. Oregon’s vote truly helped. THANK YOU OREGON.

Goes to show what a weak candidate Trump is. He’s the only one still can’t close the deal.

LOL, what universe are you in?

Curious: why would anyone care as much as to give a thumbs down to the comment about?

Perhaps they had fat thumbs, and meant to hit the thumbs up comment….at least that’s what I tell myself. 😀

Neither candidate Trump nor Clinton appeal to the bulk of Americans. On, sure, the criminal class and ignorant will fall into the Democrat camp, whether under Clinton or Sanders; but as to Trump, conservatives have little to no interest in supporting a Democrat-lite candidate with no foreign policy concepts and no foundational principles–other than close the deal so I (DJT) win.

The Libertarian Party is at least consistent: free-markets (not government-class cronyism), Constitutional government, and civil liberties–not rights–are foundations any American can support.

“Neither candidate Trump nor Clinton appeal to the bulk of Americans”

Hmm, candidate Trump has more primary votes than any republican ever. I guess they just don’t count as “Americans”.

Or, maybe, you’re just talking out your rear.

That’s because the primary dragged on forever. Most of the votes were cast against him, albeit the NeverTrump vote was divided.
Moreover, the tiny, loud minority of the GOP primary voters do not represent the entirety of the American voters.
Nice talking point though.

Yep. That “more primary votes” is horribly misleading, considering how much longer this primary season has been than any modern-age primary. We came this close to contested convention.

And by “misleading”, I mean a usual Trumpie lie.

“That’s because the primary dragged on forever. Most of the votes were cast against him, albeit the NeverTrump vote was divided.”

The primary season is the same as always. That it “dragged on forever” is a figment of your imagination, based I suspect, upon your view the wrong guy was winning. You certainly cannot make any case that Trumps largest ever republican primary vote had anything to do with the losers not dropping out earlier.

“Moreover, the tiny, loud minority of the GOP primary voters do not represent the entirety of the American voters.
Nice talking point though.”

Was that “tiny, loud minority”, tiny and loud when it was nominating Romney? Did they represent the American voter then?
“Nice talking point”. Well yes, it is, entirely because it is true.

“Yep. That “more primary votes” is horribly misleading, considering how much longer this primary season has been than any modern-age primary. We came this close to contested convention.

And by “misleading”, I mean a usual Trumpie lie.”

Only a complete and totally deranged fool could write such and not understand they were simply making a fool of themselves. It matters zero how close we came to a contested convention, Trump still has more republican primary votes than anyone in history. And it is yet to be finished.
By “trumpie lie”, you really mean it is the truth, but I don’t like the truth. Like any run of the mill foolish leftie.

Morons are so predictable. Especially the sore losers.

Barry is too obviously mentally retarded to understand simple concepts, but if there is a less braindead Trumpie, let me explain.

Does that mean we got 180k new republicans? Nope. It is that in 2012 Romney won by the time our turn came. People don’t show up nearly as much for contests already settled. The year, it was not settled, so more people showed up. And it means nothing.

Hope it is clear to to anyone with measurable IQ, which sadly, does not include Barry.

“Does that mean we got 180k new republicans? Nope.”

Nice of you to demonstrate your stupidity in public.

Cherry picking Maryland and then giving your opinion of the turnout difference doesn’t mean squat. Your opinion is worth less than a bucket of warm spit.

Using your “metric” of voter turnout after the nomination is wrapped up, the results speak a different story.

We’ve had three sets of primary results since Indiana, the night Trump “wrapped” it up. In each of these three states, the turnout is higher than 2012, substantially higher in 2 of the 3.

Virtue signaling is so tiring. Either Hillary Clinton or Donald Trump is going to be the next POTUS. Choose. If you don’t like either choice, next time work harder to get the candidate you like nominated. Whining on a blog is so boring.

Maybe you should exercise your freedom to leave, while you still have such a choice.

I’m not “virtue signaling”. The concept of virtue signaling, actively pimped by AltRight, is as stuffy of a postmodern idea as anything that comes out of the academic world. It implies that there is no objective truth, no good and evil, only perceptions and emotions. No wonder their idol feels a man is entitled to use women’s bathroom.
I have my core principles. If both candidates will be disastrous for the country, I will vote neither. Live not by lie.

No problem. Just please, you and your principles never look for help from us less principled folks. http://americanfreedomunion.com/wp-content/uploads/2016/02/1-race-still-have-Constitution-sarcastic-good-one.jpg

When Hillary wins the nomination, Washington and Oregon could both go to Trump in Nov.

Hillary is hated out here by a lot of Dems. Keep in mind Oregon (and Wa) do have strong conservative bases. This is far from the strong hold the Dems have in California.

I hear New York is now in play.

Speaking of not winning, Trump got 66.6% in Oregon race where he is the only one still running. 1/3 of republicans, knowing that their preferred candidates have dropped out and their votes don’t really count, still got up and went to the polls to say “Not Trump”.

“still got up and went to the polls to say “Not Trump”.”

Ignorance on display. Oregon votes by mail. The ballots are mailed to registered voters 2-3 weeks before the primary. All they have to do is send them back in.

You lost. But keep trying. Nothing better than seeing what sore losers look like.

Trump has released his list of potential Supreme Court nominees. He’s now given me a solid reason to vote for him without holding my nose. https://pjmedia.com/diaryofamadvoter/2016/05/18/will-trumps-supreme-court-list-finish-off-nevertrump/

As long as you recognize that it is not really his list. There were two instances where even Trump realized he is embarrassingly out of his depth and sought help from people who know. This is one of them; the list came from Heritage and Trump is teleprompting it. That is why it is a good list.

If you look at it as “I am voting for him because it is good list”, that is fine. It is a good list. If you are looking at it as “he really demonstrated good judgment on picking people”, then it is wrong. It is good judgement, but it is not his.

One of the signs of a good executive is knowing who to call upon for help and advice.

Everything is negotiable to Donald Trump.

You talk out your ass a lot. Any competent leader would seek the opinion of those most knowledgeable about any particular subject. It is Trumps list. Seeking expert opinion is the sign of a good executive.

The fact is that we face a choice between Trump and Hillary. As Hillary is a felon in waiting for her betrayal of our country in providing classified info to our enemies she has disqualified herself from being our president. Even Barney Sanders would be a million times better president than Hillary. Trump isn’t perfect, but he is better than Hillary the Betrayer.