Apparently “questioning” is only appropriate when it comes to gender!

State attorneys general aren’t the only ones engaging in climate justice thuggery.

The board for Portland Public Schools unanimously approved a resolution to eliminate materials that question on the existence of climate change and mankind’s impact on the global environment.

“A lot of the text materials are kind of thick with the language of doubt, and obviously the science says otherwise,” Bill Bigelow, a former Portland Public Schools teacher who was involved in working to present the resolution, told the Portland Tribune. “We don’t want kids in Portland learning material courtesy of the fossil fuel industry.”

“It is unacceptable that we have textbooks in our schools that spread doubt about the human causes and urgency of the crisis,” Gaby Lemieux, a high school student in the district, reportedly said in board testimony. “Climate education is not a niche or a specialization, it is the minimum requirement for my generation to be successful in our changing world.”

Interestingly, Bigelow, a former Portland teacher and current curriculum editor of Rethinking Schools (a magazine devoted to education issues) is the author of a book on climate change. 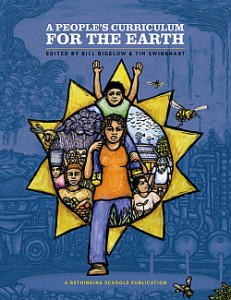 A People’s Curriculum for the Earth is a collection of articles, role plays, simulations, stores, poems, and graphics to help breathe life into teaching about the environmental crisis. The book features some of the best articles from Rethinking Schools magazine alongside classroom friendly readings on climate change, energy, water, food, and pollution–as well as on people who are working to make things better. At a time when it’s becoming increasingly obvious that life on Earth is at risk, here is a resource that helps students see what’s wrong and imagine solutions.

He insists that there are no plans to include this tome in the curriculum going forward:

“What we’re asking for is not: Buy new stuff,” he said. “What we’re looking for is a whole different model of curriculum development and distribution.”

Bigelow and the other proponents of this action insist that our kids are endanger of being subjected to propaganda from the fossil fuel industry. Quite frankly, as the mother of a teen who has experienced the public education system, the curriculum has always been “global warming”, “renewable energy”, and “recycling.” The only “climate questioning” I am aware of is related to my voluntary attempts to provide a different perspective (e.g., Maunder Minimum sun cycles).

I sure wish Exxon or the Koch Brothers would pony up a few dollars for my “climate questioning.”

Bigelow has long been a progressive gadfly, trying to force others into living by progressive precepts. His idea of sensible science is tying July 4th fireworks to heart attacks.

In Portland, Oregon, where I live, the 4th of July holiday offers an excuse for a wonderful annual blues festival in Waterfront Park downtown. Unfortunately, in my neighborhood, it also provides cover for people to blow off fireworks that terrify young children and animals, and that turn the air thick with smoke and errant projectiles. Last year, the fire department here reported 35 fires sparked by toy missiles, defective firecrackers, and other items of explosive revelry. The Washington State Department of Ecology warns that “Breathing fine particles in fireworks smoke can cause or contribute to serious short- or long-term health problems. They include: Risk of heart attack and stroke. Lung inflammation. Reduced lung function. Asthma-like symptoms. Asthma attacks.”

I hope Portland’s parents force the board to reverse their decision. The “climate-change” consensus is entirely bogus, and this forced change in curriculum is ultimately unfair to the students because it fails to educate them.

If Portland’s school board is allowed to suppress alternative theories, then the only subject our children will be allowed to question is their gender.

Banning science in the name of science.

You are thinking of the hard sciences but CAGW, like education learning theories, belongs to the human sciences. Truth is not the point. Usefulness to getting changed behavior in the future is. http://www.invisibleserfscollar.com/statutorily-stipulating-a-science-of-the-individual-driven-by-useful-internalized-guiding-fictions/ introduces the behavioral science fundamental tenet of ‘guiding fictions’.

Anthony Giddens, a famous sociologist in the UK, actually said back in the 90s that it did not matter if CAGW was true or not. It forced the desired social and economic changes and a need for government dirigisme generally.

Actually, I was just being flip. Enjoyed your comment though.

The modern Living Scientific Method (a twist on Living Constitution) allows for infinite adaptation to accommodate all manner of contemporary political insanity.

Skepticism is a hallmark and basic tenet of science. Without constant questioning and arguing over how experiments should be constructed, what controls are necessary, what data are important, how data are interpreted, and so forth, we cannot be assured that today’s research is not flawed. This is extremely important because today’s work becomes the foundation for tomorrow’s and, if the foundation is flawed, then tomorrow’s research will not be worth anything doe to inherent flaws.
>
Whenever you hear how the science is settled or something similar, you are actually hearing two confessions. The first is that they are making the claim that they are the most anti-science among us and they are willing to lie and try to hide this to confuse you. The second is that their issue is highly flawed and almost certainly wrong for if it was correct, then they would welcome open discussion because it would further prove their point/position.
>
But to the global warming crowd, we now need to enter a new dark age where only they are allowed to speak and only their ideas are allowed to be discussed. Mother Nature’s opinion no longer matters.

“I hope Portland’s parents force the board to reverse their decision. The “climate-change” consensus is entirely bogus, and this forced change in curriculum is ultimately unfair to the students because it fails to educate them.

If Portland’s school board is allowed to suppress alternative theories, then the only subject our children will be allowed to question is their gender.”

I would hope that parents would take action, too. I doubt they will, though. Parenting is hard and fighting back against an entrenched bureaucracy is even harder. Add to that an economy in which most families both parents (should the original two still be around) must work to pay the bills. Then add to that our social conditioning that the schools are the “experts.” Net result? I rather suspect the same old, same old. Parents will continue to dump their kids at the public school. (The parents who are seriously invested in their kids have, for the most part, fled the system.)

Hi anonamom. Oregon was the first state to adopt Transformational Outcomes Based Education on a state-wide basis. Consistent with the comment I made above, its K-12 education system is driven by a need to push students into believing in the need for transformational change.

Just imagine the software programs that can be attached to virtual reality platforms to embed the students in a visual world that will be seen to work however its creators designed invisibly into its code. A developer, Jane MacGonnigal, who works at Institute for the Future even crowed in her book about the guiding beliefs and values such graphics could create. As a result she got the keynote address in 2013 at the annual ISTE global convention in Austin.

And visual images are much more difficult to override once they are internalized than verbal images are.

Stop it, Robin. You’re scaring me.

Thanks but accurately describing the declared intentions is the only way to have any chance of avoiding them.

This is the post where I explained what was in MacGonnigal’s book Reality is Broken http://www.invisibleserfscollar.com/when-gaming-intends-to-shape-and-distort-our-perceptions-of-everything-around-us-viva-la-revolution/

Institute for the Future, by the way, regularly works with the same Knowledge Works that is behind the Innovative State Labs vision for competency-based education. They also used to own the New Tech Network new vision for high schools this White House is pushing. In other words, the declarations are backed by federal funds and magnificent connections to regulators and politicians.

Without integrity, science and every other rational endeavor are dead. When you have “scientists” who are partisans for a dogma, or who are for sale, you don’t have scientists. Just trained advocates for one side or the other. Just technicians with an agenda.

Integrity seems to be one of the greatest deficits in the US at the moment, along with the world.

Collectivist dogma drives out integrity. I can’t tolerate it. Just look at its leading adherents.

“It can’t tolerate it.” One of my common typos.

Stalinist leftists do not dare have their spew questioned. Having liberty used to mean that one could explore ideas for their validity from all sides, and base the conclusion on the overall facts. This is proof of the overt, blatant, totalitarian aspects of so-called modern liberalism.

I thought teaching a religion in public school was verboten…

Politically driven “science” produced Lysenkoism that contributed to the poor performance of Soviet agriculture (there were multiple contributors). A hallmark of the left is willful ignorance as displayed by the Portland School Board. Leftists really do believe that reality is defined rather than discovered.

Perhaps the Portland School Board could set up some adult education classes for the benighted “questioners” of the orthodoxy. Perhaps the LI readers could receive a volume discount for attending.

Oregon…though I can understand your confusion. 😀

It is so saddening that the practices of the USSR and the Nazis have come to our shores.

Science requires criticism and doubt. Religion forbids both. Clearly, the priests and priestesses of Portland have spoken.

Portlandia, like a few other enclaves of crazy, is still an aberration in the US, however.