Broadcaster referred to the murderer as MARTYR at least 11 times. 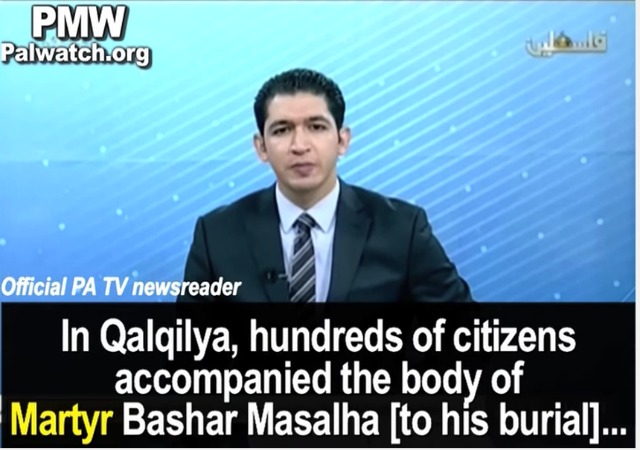 The official Palestinian Authority television celebrated the death of U.S. tourist Taylor Force, calling his murderer a martyr 11 times in the broadcast.

Official PA TV newsreader: “In Qalqilya, hundreds of citizens accompanied the body of Martyr Bashar Masalha [to his burial]…”

Official PA TV reporter: “After delays by Israel in the transfer of his body, Martyr Bashar Masalha’s family, from the village of Hajja, east of Qalqilya, received their son in the evening… The Martyr Bashar returned from Qalqilya to his village Hajja in a procession… His family, friends, and people of the region took it upon themselves to ensure that this [burial] would be a large national wedding (i.e., to the 72 Virgins in Paradise) befitting of Martyrs… The Martyr was accompanied to his last resting place in the cemetery for Martyrs in Hajja…”

Official PA TV reporter: “Martyr Bashar Masalha, 22, ascended to Heaven in Jaffa on March 8 [2016] (i.e., he was shot after killing US tourist)… He returned and was embraced by the soil of his homeland as a Martyr.”

Bashar Masalha attacked and stabbed American veteran and Vanderbilt University student Force on March 8. The attack left his wife seriously injured. They traveled to Tel Avuv on a school trip.

Police shot and and killed Masalha as he attempted to escape on foot. The Jerusalem Post reported that he injured others, including a pregnant woman.

Vice President Joe Biden attended the Peres Center for Peace, located only a mile away from the scene.

Biden asked Mahmoud Abbas to condemn the attack and murder of a U.S. citizen, but he refused. He only “offered condolences.” From Palwatch:

Worse still, Abbas has justified the attacks. After Palestinians had carried out 65 stabbing attacks, 8 shooting attacks, and 8 car ramming attacks, in which a total of 14 Israelis were murdered and 167 were wounded, Abbas defended them as part of a “popular peaceful uprising”

Clearly our outreach and effort to “communicate” is not sufficient. It is our fault this is happening. Give it time, and let us “engage” them more and it will bear fruit. (The progressive’s guide to diplomacy.)

At least the Israelis didn’t apprehend the fleeing murderer, only to trade him back along with 999 others for a kidnapped Israeli.

Only because he didn’t give them that option. Israel is currently prosecuting a soldier for shooting a terrorist who was allegedly already subdued, at least for the moment. He says he saw the terrorist move as if to set off a bomb; but whether he did or not, all that terrorist’s would-be future victims and their families are grateful to him, and he should be getting a medal. It’s not as if there was the slightest possible doubt about the “victim’s” guilt.

Before watching, may I ask if Oliver explains how the primary system works in Britain, France, Italy, Germany, Spain, Slovakia? It seems the same candidates always win the primaries for their parties, e.g., Marine LePen.