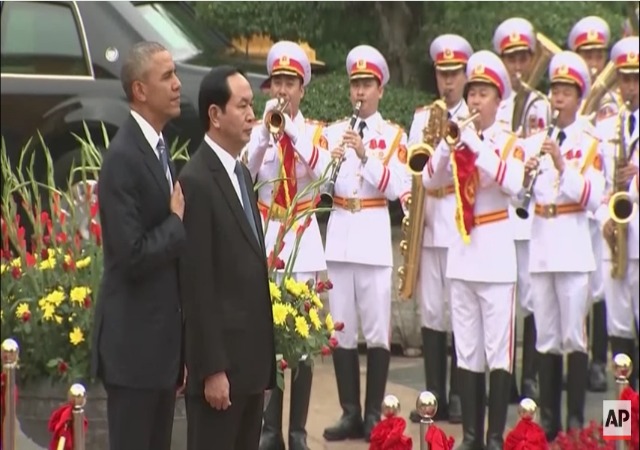 At a press conference with Vietnamese President Tran Dai Quang, Obama said that he did not consider China’s aggression in the region as a motivating factor. He chose to remove the ban as “part of a deeper defense cooperation with the country” and “normalizing relations” between the one time enemies:

“Over time what we’ve seen is a progressive deepening and broadening of the [bilateral] relationship,” Obama said. “And what became apparent to me and my administration at this point was … that it was appropriate for us not to have a blanket, across-the-board ban.”

The U.S. implemented the ban during the Vietnam War, which ended in 1975 after the army withdrew forces from Saigon. North Vietnam ambushed the city, reunited the two Vietnams, and renamed the capital Ho Chi Minh City after the revolutionary leader.

Vietnamese citizens welcomed Obama to their country, especially when they heard he wanted to lift the embargo:

As word of the president’s announcement that he was lifting the arms embargo spread, some residents welcomed the gesture in light of a contentious relationship with giant neighbor China, which is engaged in a territorial dispute with Vietnam in the South China Sea.

“Like everyone else, I don’t want any conflict” said Nguyen Dinh Toan, 63, who drives one of the ubiquitous motorbike taxis known as xe om. “But if the U.S. can help us, that would be good. It’s a big leap for both countries. I want the bond to be strengthened even more.”

Murray Hiebert, a senior advisor and deputy director of the Southeast Asia program for the Center for Strategic and International Studies (CSIS), said that Beijing will probably see the embargo move as a “way to bolster Vietnam’s maritime domain awareness in the South China Sea as an effort to stand up to China’s more assertive ambitions in the disputed waters.”

The CSIS recently found evidence that the Chinese have built “a radar system on Cuateron Reef in the Spratlys, one of many locations where China has constructed artificial land on reefs that are widely considered to be in international waters.” Experts believe this construction will hinder the U.S.’s ability to operate in the sea:

“This would be very important in a Chinese anti-access area denial strategy that sought to reduce the ability of the U.S. to operate freely in the South China Sea, including bringing forces up through the South China Sea in case of any future crisis in Northeast Asia,” Gregory Polling, head of the Asian Maritime Transparency Initiative at CSIS, told The Washington Post.

Over $5 trillion worth of goods pass through the South China Sea every year.

Images from The Diplomat showed China has begun construction on the Paracel Islands, “following years of work building artificial islands in the Spratly Archipelago.” The Philippines, Vietnam, Taiwan, and Malaysia have all claimed rights to these islands.

“Vietjet is efficiently operating a fleet of narrow body airplanes. Our investment in a fleet of B737 Max 200 will accommodate our strategy of growing Vietjet’s coming international route network including long haul flights,” said Madam Nguyễn Thị Phương Thảo during the signing. “Through this Agreement, Vietjet will contribute increasing bilateral trade turnover between Vietnam and the United States, as well as contributing to the integration and development of the aviation industry in Vietnam.‎”

The airplanes will be delivered from 2019 through 2023, supporting Vietjet’s continuous growth of its domestic as well as international network in the region. This agreement also helps Vietjet to increase its fleet to more than 200 airplanes by the end 2023, with the most modern and advanced technology in the world.

“Boeing is proud to again play an integral role in advancing Vietnam’s aviation industry. We’re honored to be joined by President Quang and President Obama for this historic milestone and order of 100 737 MAX 200 airplanes,” said Conner. “Incorporating the latest design and technology features, the highly efficient 737 MAX 200 will provide Vietjet’s growing network with market-leading economics, a superior passenger experience and contribute significantly to their future success.”

Obama topped off the night with Anthony Bourdain, host of CNN’s Anthony Bourdain’s Parts Unknown. They ate at Hanoi restaurant Bún chả Hương Liên, but Bourdain did not dish out too much since he will include the meeting in a September episode of his show.

The President’s chopstick skills are on point . #buncha #hanoi

I knew that there’s a reason I can’t stand Anthony Bourdain.

Thanks, Republicans, for re-authorizing the ExIm bank!

There goes another nail in America’s coffin!

Like sending all those manufacturing jobs to China was okie dokie. After the way the US abandoned the RVN in 1975, I don’t have a problem with doing business with Vietnam. They aren’t nearly as dangerous as the Chinese.

Next week – Tacos in San Antonio where the Prez will apologize for the Alamo.

You know, to me it isn’t about making nice to Vietnam. In geo-political strategy, sometimes you need to mend differences (Germany and/or Japan, anyone?) and it has been awhile. That doesn’t erase the trauma of that conflict – thank you DemocRats for that – but Vietnam has come much closer to our way of thinking that we have theirs.

It’s much more the way it is being done. Unilaterally, without an opportunity for the citizens or their representatives to be heard.

If we as citizens were heard, MAYBE our feckless ‘leader’ might not have stood in a place of honor in front of those memorial statues. Of course, it might have made this POS just that much more determined to be seen in that context…but he IS our servant, we are not his subjects.

Yet. He’s working on it. Has about 7 more months to bring it off.

“If we as citizens were heard, MAYBE our feckless ‘leader’ might not have stood in a place of honor in front of those memorial statues.”

I’m guessing you’re talking about him standing in front of the Ho Chi Minh busts.

Funny how when he went to Georgetown a few years back, he just had to have the religious symbols covered up. This not so much.

I thought being the president was not like a reality TV show?

“Obama topped off the night with Anthony Bourdain, host of CNN’s Anthony Bourdain’s Parts Unknown. They ate at Hanoi restaurant Bún chả Hương Liên, but Bourdain did not dish out too much since he will include the meeting in a September episode of his show.”

Try ‘North Vietnam conquered South Vietnam and ground them under their boots’.

Thanks to demorats like Frank Church cutting off aid to the south. Given the choice of having a beer with an old NVA and having one with lurch….lurch loses.

As a Viet Nam Vet and hard core Republican, Obammy has finally done something that I can agree with.

Since Vietnam is the subject, I won’t be off subject by mentioning the Vietnam Children’s Fund.

Dining with “celebrity” chefs; constantly fraternizing with Hollywood actors, rappers, pro athletes and comedians; perpetually needing to be around famous people in order to feed his massive ago, to suppress his insecurities and to validate his sense of worth. Plus, posing for inane Youtube stunts and internet memes. But, remember, as Obozo the Wise says, the presidency isn’t a “reality show!” Obozo always knows best!