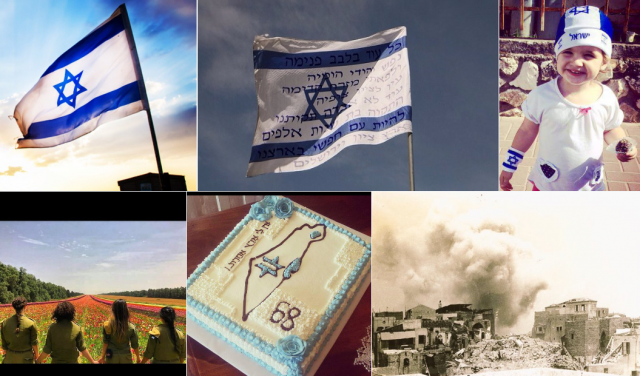 The Day of Remembrance for the Fallen Soldiers of Israel and Victims of Terrorism (Yom Ha’zikaron) began yesterday when a memorial siren at 8:00 p.m. brought Israel to a standstill. It marked the start of the commemoration day nationwide, with an official state candle-lighting ceremony at the Western Wall (the Kotel) in Jerusalem also taking place at that time.

Another two-minute siren wailed this morning across Israel.

For the remainder of the day, hundreds of thousands of Israelis have flocked to official ceremonies throughout the country, where they’ve been honoring those who’ve fallen in Israel’s wars and terror attacks.

It’s the “most poignant moment” on the modern Israeli calendar: the sudden switch from Memorial Day’s solemnity to Independence Day’s celebrations.

The revelry will be ushered in at 8:00 p.m. tonight with a torch-lighting ceremony on Jerusalem’s Mount Herzl, launching Israel’s 68th birthday. But not before Israelis spend a day acknowledging that they owe their independence and the state’s very existence to those who gave their lives to defend her.

Israel Bows Its Head in Honor of Fallen Soldiers

Due to the time difference, Israel’s 8.5 million citizens are already nearing the end of Yom Ha’zikaron. They’ve spent it remembering the 23,447 young men and women who gave life and limb for their country.

"A million prayers to God above, a million tears make an ocean…"#Undivided #NeverForget #IsraelMemorialDay ? pic.twitter.com/9grfjGAhaH

On the eve of #IsraelMemorialDay, the entire nation of Israel bows its head to honor our fallen soldiers @idfonline pic.twitter.com/KNDZlhww88

According to Israel’s Defense Ministry estimates, today some 1.5 million Israelis are expected to attend “heart-rending ceremonies” at the country’s 52 military cemeteries and at the hundreds of smaller military sections located in civilian graveyards.

In advance of Yom Ha’zikaron, the Defense Ministry has released the following data: over the past year, 68 Israeli soldiers and police were killed in the line of duty and 58 disabled veterans also died of their wounds.

These are staggering numbers—there are very few Israelis who don’t personally know someone affected by the loss. As pro-Israel blogger Vic Rosenthal remarks in a recent post:

This is the real, concrete cost of maintaining a Jewish state. Proportionate to population, it is about the same as the number of Americans who died in all of America’s wars since 1775, including the Civil War and the two World Wars”.

Here’s a moving tribute to Israel’s fallen soldiers posted to You Tube this week by Israeli musician Elisha Zakai:

Remembering the Victims of Terror

In addition to recalling those who died in the service of Israel’s military, Yom Ha’zikaron also remembers loved ones who died in terror attacks. This year, there were 32 Israeli terror victims.

According to the Defense Ministry, in total 2,576 Israeli civilians and pre-state Jews were killed in terror attacks since the beginning of political Zionism.

Along with the statistics reported by the Defense Ministry, Israel’s intelligence agency—the Shin Bet security service—also issued a report this week detailing its activities to prevent terrorism over the past five years. 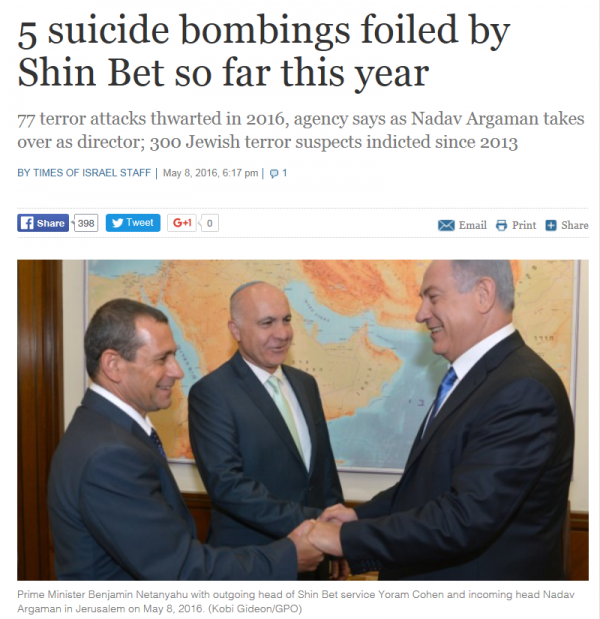 Over the past five years, 65 people who swore allegiance to the Islamic State were arrested in Israel. The arrest operations enabled the Shin Bet to foil 8 planned attacks on Israelis.

The data highlight the wave of violence that’s wracked the country since last October. As we’ve described in a number of posts (for a partial list see here), it’s been characterized by stabbings, shootings, and car-rammings of Israeli men, women, and even children simply going about their daily routines.

Israeli security officials now believe that this “knife intifada” is on the wane.

But a majority of Palestinians continue to support, condone, and glorify these violent attacks. And innocent Israelis are still being set upon by armed assailants, even as the number of incidents is dropping.

Yesterday, as the citizens of Israel prepared to honor their loved ones who “departed too soon” while defending the Jewish state, two elderly women were hurt in a stabbing attack in Jerusalem’s Armon Hanatziv neighborhood. According to media reports, masked assailants knifed the victims—both in their 80s—at a promenade in southern Jerusalem, which is popular with joggers and walkers. 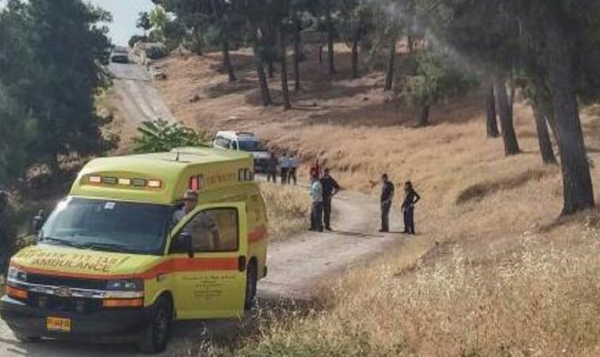 That particular section of the promenade is known as the ‘Peace Forest’. One of victims is reportedly a Holocaust survivor. As of this writing, the attackers remain at large.

On this Yom Hazikaron, when Israel mourns 23,447 fallen soldiers and 2,576 terror victims, I pray that the numbers next year are the same.

A Celebration of Israel’s Founding

As I noted in a recent op-ed for Providence: A Journal of Christianity & American Foreign Policy:

Yom Ha’atzmaut marks the return of the Jewish people to national sovereignty after 2,000 years of exile. It’s a way of expressing solidarity with, and a Jewish connection to, the land and the State of Israel”.

It’s a formal holiday with many official ceremonies—but there’s also a lot of partying. During the day thousands of Israeli families go on hikes (tiyulim) and picnics—the national pastime. At night, there’ll be fireworks and street carnivals.

Israelis have earned the right to celebrate: the establishment of the state of Israel is a modern day miracle. There are 68 good reasons—and a hundredfold more—to respect and love the one and only Jewish state on its 68th birthday. 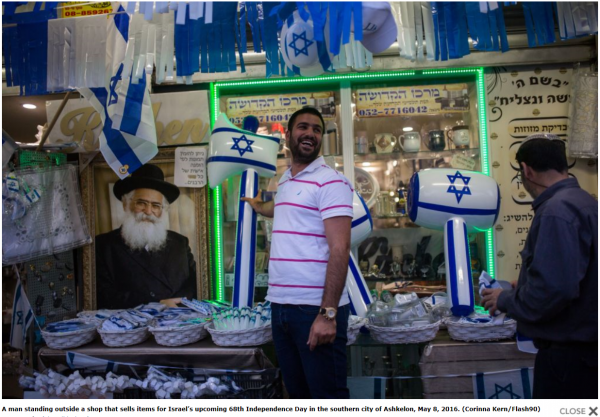 Here’s a video that describes just a fraction of what Israel has achieved, and the contributions her citizens have made to the world, in such a short time and “against such daunting odds”:

In a touching “open letter” published on Monday in The Jerusalem Post, Nava Shoham-Solan, who serves as chairwoman of the IDF Widows and Orphans Organization, describes the significance of Remembrance Day for the families of Israel’s fallen:

We don’t have a real need for such a day because we live the loss every day, every hour, at every important crossroad in our lives…The void becomes greater and takes on a relentless aspect. Yet nevertheless, Remembrance Day is important. We receive a warm hug from all the other citizens and from the state…We know that thanks to our loved ones this country exists, and thanks to them most of us can sleep well and without fear. We know that they sacrificed themselves exactly for these goals, in order to ensure our future in our small land, here in the stormy and turbulent Middle East”.

Basically, in her simple and heartfelt words, Shoham-Solan has hit on the very source of Israel’s success: the strong bonds between its citizens which “foster a sense of well-being” and a delight in the country’s accomplishments.

Turns out this may also account for why—despite the non-stop conflict with the Palestinians, the threat of Iran and an imploding Middle East, and the relentless global campaign to deny Israel’s right to exist—Israelis are paradoxically really happy and satisfied with their lives.

In a thoughtful op-ed for yesterday’s Wall Street Journal (behind the WSJ paywall, but see some excerpts here), Avinoam Bar-Yosef, president of the Jewish People Policy Institute and former chief diplomatic correspondent and Washington bureau chief for the Israeli newspaper Maariv, explains why Israel ranks 11th out of 158 countries on the 2016 Update of the World Happiness Report and “shines as No. 5” out of 36 countries on the OECD’s Life Satisfaction Index—ahead of the U.S., the U.K. and France.

Israelis– all of them: Muslims, Christians, Druze & Jews– are among the world's happiest people. https://t.co/NHunDzjJE5

According to Bar-Yosef, little embattled Israel isn’t perfect—no country is. But her citizens comfort each other in their grief and savor the “bang-up job” that they’re doing building a vibrant democracy—a “bright flame in a pitch-black region”.

It’s exactly this kind of thinking that turns a country into a success story—and earns its people the right to be damn “proud and happy”.

Miriam F. Elman is an associate professor of political science at the Maxwell School of Citizenship & Public Affairs, Syracuse University. She is the editor of five books and the author of over 60 journal articles, book chapters, and government reports on topics related to international and national security, religion and politics, the Middle East, and the Israeli-Palestinian conflict. She also frequently speaks and writes on the Boycott, Divestment, and Sanctions (BDS) anti-Israel movement. Follow her on Twitter @MiriamElma

One cannot ponder the formation and survival of Israel without considering the whole ambit of “miracles”.

My grandmother, still alive back then, raised money to plant trees in Israel, one for each of her relatives lost to the German death camps.

I seem to remember the number of trees planted was 18 — she received certificates of confirmation they were planted, but they are lost to history, and I don’t know where they were planted or what kind of trees they were. But every time there’s a significant missle attack against Israel I wonder if the leafy remnants of my grandmother’s memorial plantings survived them.

In other news, the USA’s vile Pres. Lie All the Time is still a wretched Jew-hating bastage.

Alternative headline: “Israel celebrates 68 years of thumbing their nose at their neighbors”

When those neighbors want you dead, that’s a polite and restrained response.

The truth is that Israel has extended the olive branch to every one of it neighbors every day.

In at least some cases, that has proven fruitful.

Happy Birthday and many more!!

“According to the Defense Ministry, in total 2,576 Israeli civilians and pre-state Jews were killed in terror attacks since the beginning of political Zionism.”
———-

Not to imply that 2,576 murder victims are an insignificant number, but, I am amazed that the number of civilian victims of terrorism since Israel’s founding isn’t higher than this figure. What a testament to Israel’s vigilence and tenacity in combating terror unabashedly, without regard for the misguided and idiotic politically correct niceties and posturing that accompany anti-terror efforts in Europe and, to a lesser extent, the U.S.

The Israelis don’t have the luxury of treating terror and the ideology behind it as anything less than an existential threat.