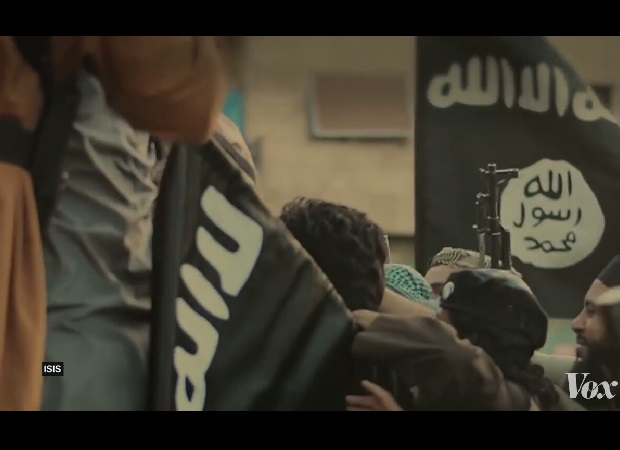 Revolting details have come to light about Islamic State’s secret chemical weapons program. British newspaper The Telegraph reported that ISIS has been testing lethal chemical on humans, as well as setting up labs and moving chemical weapons stockpiles to residential areas of the Iraqi city of Mosul.

The report claims that ISIS has been experimenting on captives held at a prison camp in Nineveh, Mosul. The residents near the prison have been reporting breathing difficulties and children were developing severe rashes — side effects associated with chlorine and mustard gas.

The residents of a former Christian neighbourhood in Mosul reported that ISIS moved their chemical labs after US airstrikes on the terrorist group’s chemical facility at a local university. ISIS fighters moved in the locality with huge unmarked trucks and had been dumping dead dogs and rabbits in the nearby waste heap. The Telegraph corroborated the local eyewitness accounts with an ISIS informer who verified that animals dumped in the area had previously been tested with chemicals.

Islamic State has moved its chemical weapons operation to densely populated residential areas and is testing homemade chlorine and mustard gas on its prisoners, residents of the Iraqi city of Mosul have claimed.

The Islamic State of Iraq and the Levant (Isil) is reported to have set up laboratories in built-up neighbourhoods in the heart of its so-called caliphate to avoid being targeted by coalition air strikes. (…)

It has a special unit for chemical weapons research made up of Iraqi scientists who worked on weapons programmes under Saddam Hussein, as well as foreign experts.

The head of the unit, Sleiman Daoud al-Afari, was captured during a raid by US special forces outside Mosul in March and is now sharing intelligence on Isil’s chemical operation.

Iraqi city of Mosul, once a predominantly Christian city with an unbroken Christian presence going back to the early days of Christianity, has today turned into an Islamist hellhole. Within a span of 10 years, Islamist campaign of genocide and ethnic cleansing has reduced the Iraqi Christian population from 2 million to 180,000.

After capturing the city in the summer of 2014, ISIS gave city’s entire population merely 24 hours to convert to Islam or face certain death. Reportedly, as many as 100,000 Christians managed to flee the city on that fateful night. The remaining Christians have since been witnesses to horrific tales of depravity at the hands of their captors.

The U.S. is aware of ISIS’s Mosul-based chemical weapons programme. An Iraqi generals described the well-stocked university facility in Mosul as “the best [ISIS] research center in the world.” In March 2016, U.S.-led coalition bombed Mosul University Chemistry Lab, but could not ascertain the extent of the damage done to the terrorist group’s WMD infrastructure.

The reports now published by London-based Telegraph confirms that ISIS’s chemical weapons programme is back on its feet.

In 2014, President Obama said referring to ISIS that “if a jayvee team puts on Lakers uniforms that doesn’t make them Kobe Bryant.” ISIS today is backing up its repeated claims of bring death and destruction to the “non-believers” with a well-orchestrated campaign of terror. The only question is; what would it take for the West to wake up to this evil?

This wouldn’t be a problem if we’d been serious about these barbarians at the beginning.

Now, though, hitting those depots is going to release chemical weapons into a civilian population.

Recall the battles waged during the Bush administration to get Iraq under control. The country was stable when he handed it over to Obama, with fewer combat-related casualties than were occurring then in the drug wars in Chicago. Since Obama took office both places have spiraled out of control.

Obama had to placate his idiotic progressive base by simply pulling out of Iraq, leaving a complete power vacuum. That would have been bad enough, but he then went further by fomenting fundamentalist Islamic revolution throughout the region.

Make no mistake about it, the burning middle east and all of the resulting turmoil, including the refugee wage burying Europe, are a direct result of voters putting a completely incompetent, unqualified Community Organizer MORON in office as POTUS. His first mistake was naming a delusional nincompoop suffering from dementia (Hillary Clinton) as Sec State.

And after almost eight years of this incompetence, the idiotic progressive base still babbles on about “George Bush.” I wonder where ISIS found the materials to constitute a WMD program in the first place?

At times I wonder if some people have trouble believing the degree of atrocities committed and celebrated by ISIS. They seem to be in a cycle of trying to one-up the last horrific act.

The only question is; what would it take for the West to wake up to this evil?

Well, mounds of dead or even dismembered people haven’t done the job. Nor have persecuted gays or abused women. But if a pile of dead rabbits and dogs won’t make liberals finally acknowledge that there’s a downside to the Islamic dream of universal conquest, nothing will.

The Assyrians of old are being reincarnated and joining ISIS with the determination to make Hitler look kind and compassionate in comparison.

The left will care only if ISIS begins dictating who can use which bathroom.

President Barack Obama once again refused to label the fight against terrorism as a war on radical Islam or any kind of “religious war.”

Donald Trump accuses President Obama and other politicians of “losing the war on terrorism” and promises to “quickly and decisively bomb the hell out of ISIS.”

Sounds like it’s time for another red line in the sand.

The DAESH have chemical weapons in Iraq…..wonder why?