Is ISIS a serious threat or not? We’re not sure the President has decided yet. 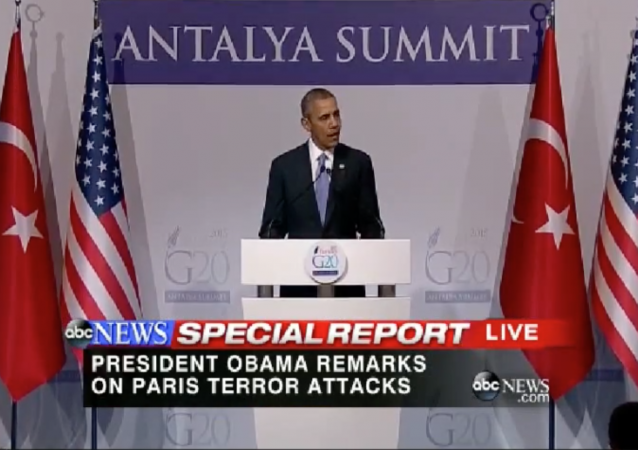 “Much of our attention has focused on the heinous attacks that took place in Paris… We’re working closely with out French partners as they pursue their investigations and track down suspects. France is already a strong counter-terrorism partner and today we’re announcing a new agreement. We’re streamlining the process which we share operational and military intelligence with France,” said President Obama.

Has the President changed his tune on ISIS, at least when it comes to the type of threat the wannabe caliphate poses? The reader may remember the oft-tossed around reference the president once made about ISIS, calling them a “JV” team.

Last year, during an interview with New Yorker Magazine, President Obama said of al Qaeda groups, “the analogy we use around here sometimes, and I think is accurate, is if a jayvee teams puts on Lakers uniforms, that doesn’t make them Kobe Bryant.”

The administration later tried to walk back the JV analogy, though no one bought it.

Fastforward to this morning.

“ISIL is the face of evil. Our goal, as I’ve said many times is to degrade and ultimately destroy the barbaric terrorist organization. We have a comprehensive strategy using all elements of our power. We have always understood this will be a longterm campaign. There will be setbacks and there will be successes,” Obama explained.

So is ISIS a JV team or the “face of evil” that must be destroyed? We might know the answer to this question, but we’re not sure this administration does.

When asked about his “JV” comments Monday morning, President Obama was not amused.

One thing we do know for certain — President Obama has no interest in winning.

At least he won’t have that bust of Churchuill to haunt him.

Europe has traded it’s security for political correctness. Obama is working hard to do the same here. I won’t be a part of it. In the time it took these social-justice warriors to add the flag of the Fifth French Republic to the profile pictures; I cleaned my firearms, inventoried my ammo and MREs, and made sure my family knows what to do and where to meet should such an unfortunate circumstance happen here.

“An appeaser is one who feeds a crocodile, hoping it will eat him last.” -Winston Churchil

You will note, he never calls it ISIS, only ISIL. He can claim his policies are working against ISIL all day long because ISIL is a made up organization that exists wholly within the Obama Administration’s imagination. ISIS on the other hand is very much real but that is NOT the organization ee keeps referring to.

ISIL is deliberate. The Levant. It sends a message to the Muslims that he doesn’t recognize the existence of Israel.

Doesn’t anyone get it yet? The guy is fundamentally transforming via destruction. Deliberately. Buying them time. Not that he’s clever enough to do anything but sashay around in his life’s latest acting job. But that’s all he has to do for his buddies, from the nincompoop progressives to the calculating jihadists. Let them all run amuck.

This is the guy who let the radical Muslim Brotherhood oust a long-time faithful US ally in Egypt, Mubarak (who’d been in and kept peace since Sadat was assassinated – by the MB), and replace him with their own man, Morsi, who was in turn ousted by the military after fully a quarter of the country’s population took to the streets demanding it. And has punished them for the ouster by delaying aid.

This is the guy who releases terrorists from Gitmo and gave Iran its frozen assets and a green light to go nuclear.

Pretty clear which side of history Obama is on, and it is not America’s.

At least Cruz is attempting to push back against the muslim brotherhood.

Completely coincidental, I know, but the Amazon widget is displaying a “President Obama Talking Action Figure.” What a hoot. I suppose it would make a good voodoo doll, but I can’t imagine any other suitable use for it ~

How many more lies?

Obama is Isis, as is his puppet-master Valerie Jarrett.

This move in Paris was very poorly timed. It interrupted the syophantic media coverage of Obama’s racist #blacklivesmatters movement. It got even fairly dumb voters wondering why Obama is pushing to import a terrorist population from Syria into the US. Most amazing, it even got France not to act like France.

Until enough of us face just who ‘Barack Hussein Obama’ really is, WW III – and the American Civil War II – will continue in the making.

And as time and events march on, it’s as important as ever to remember who Boehner had knowingly been in bed with all these years – and who McConnell continues to be.

Maybe it’s just confusion as to who he was referring to as a JV Team, could have been the White House.

If Paris was the JV team ,I hope we don’t see the varsity, college or pro team soon.

I think he was just having a Freudian dyslexic slip , he meant to call it the VJ team after his boss Valerie