. . . because it discriminates against minorities 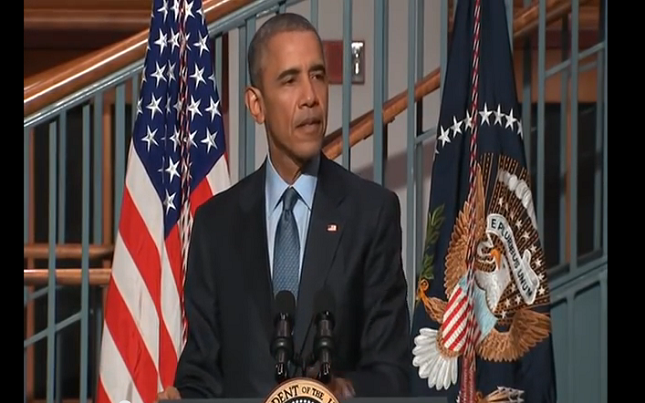 In 2015, Obama announced that he was calling on all federal agencies to no longer check the criminal history of job applicants.  This “ban the box” move was part of a larger criminal justice reform agenda that is now being extended to the nation’s colleges and universities.

The Obama administration has ordered the nation’s colleges and universities to stop asking applicants about criminal and school disciplinary history because it discriminates against minorities. Institutions are also being asked to offer those with criminal records special support services such as counseling, mentoring and legal aid once enrolled. The government’s official term for these perspective students is “justice-involved individuals” and the new directive aims to remove barriers to higher education for the overwhelmingly minority population that’s had encounters with the law or disciplinary issues through high school.

Part of the problem, the Obama administration and opponents of “the box” believe is that asking such questions about criminal or school disciplinary history “disproportionally affects blacks and Latinos.”

“Students of color are the most likely to be harmed by putting these questions on the application,” said Natalie Sokoloff, professor emerita of sociology at John Jay College of Criminal Justice. She conducted a study that looked at the use of (or absence of) the question by two-year and four-year colleges in Maryland, a total of 50 schools. She analyzed all application forms used during one year and concluded that 40 percent included a question about criminal background. “Public four-year and two-year colleges are less likely to ask the question at the state and national level. Places that are more likely to give an opportunity to people with criminal records are two-year public colleges, and places that are least likely are private four-year colleges,” she said.

Sokoloff believes, “These kinds of practices really are de facto forms of race-based discrimination, because people of color are disproportionately impacted by these policies.” Scholars like Sokoloff, reform advocates, and public thinkers often point to the structural racism already at work in school systems—in which the over-disciplining of black children creates a school-to-prison pipeline. So not only are black students more likely to end up in prison than other groups, but once they are released and attempting to break that cycle by applying to college, they are more likely to confront the box—and the conundrum of whether or not to check it.

“This question doesn’t belong on the college-admissions form any more than questions about the weather belong there,” said Barmak Nassirian, current director of policy analysis with the American Association of State Colleges and Universities.

Obama made much the same argument late last year when he announced his plan to “ban the box.”

Not only are the feds concerned with “banning the box,” but they are also urging colleges and universities to take additional steps to provide students with criminal histories a range of support services.

Colleges and universities are to take it a step further by offering students with criminal histories special support services. This is to include targeted academic and career guidance as well as counseling, legal aid services, mentoring and coaching. “Institutions should recruit and train peer mentors with previous justice involvement to work with justice-involved students to ensure a smooth transition to postsecondary education and provide support and resources throughout their time at the college or university,” the new directive states. “These peer mentors could begin their work by acting as navigators who help acclimate justice-involved students to the educational institutions.” Perhaps colleges and universities should also start sending recruiters to jails across the country.

In his Rutgers speech (above), Obama urged Congress to pass a law that would require private businesses to “ban the box,” as well.  The Obama administration attempted to enforce this several years ago by having U.S. Equal Employment Opportunity Commission (EEOC) sue private companies, including BMW and Dollar General.  It didn’t go well.

Years ago the administration tried slamming the private sector with a ban on job applicant background checks by claiming that they discriminate against all minority candidates, not just ex-cons. The U.S. Equal Employment Opportunity Commission (EEOC), the federal agency that enforces the nation’s workplace discrimination laws, wasted taxpayer dollars suing companies for checking criminal histories asserting that it violates Title VII of the Civil Rights Act. The apparent intent was to discourage other businesses from checking criminal histories out of fear of getting sued by the government, but it didn’t quite work out that way. A federal judge eventually blasted the EEOC’s claims, calling them laughable, distorted, cherry-picked, worthless and an egregious example of scientific dishonesty. Of interesting note is that the EEOC conducts criminal background checks as a condition of employment.

This won’t be the last time we hear about efforts to “ban the box.”

“The Obama administration has ordered the nation’s colleges and universities to stop asking applicants about criminal and school disciplinary history because it discriminates against minorities.”

I guess it discriminates against “criminal” minorities!
More non-sense from this criminal Obama administration.
According to Obama the criminal has more rights than you do.

With the Collective, it’s all about race, all the time. They work to make sure all the wounds…real or imaginary…are kept open and festering.

“Justice involved” (now THERE’S a term dripping with debatable ASSumptions!) are rightly of some degree of concern. Not that they cannot…or should not…be able to overcome that concern on a individual basis. But it’s silly to ASSume they aren’t potentially dangerous to other kids in a college setting, or employers and employees in the work-place.

Conversely, if you are a “military involved” student, you are subjected to all kinds of knee-jerk assumptions about your dangerousness.

Wait a minute – I thought that the purpose of the sexual assault hearings was to destroy the reputations and lives of men by getting them banned from all other universities. But now, those guys will be able to just apply to another university because they won’t have to mark any box.

Reminds me of the time an EEOC official told me I could not discriminate against certain classes of people even though the DOJ grant required hiring of a Native American female.

We are getting crazier – everything is a crime now.

“We are getting crazier – everything is a crime now.”

That is the plan. If everything is a crime, then the serfs can be controlled through selective enforcement. The Soviet Union is coming back to life but this time it is close to home.

They’re working hard to make that 1 in 4 statistic retroactively true.

You know why that is? Because black and hispanics commit disproportionately more crime than whites and Asians.

“Scholars like Sokoloff, reform advocates, and public thinkers often point to the structural racism already at work in school systems—in which the over-disciplining of black children creates a school-to-prison pipeline.”

LOL. Yes, just spend a day (or even 5 minutes) observing public school students in Detroit, or Baltimore, or L.A., etc., and see if you can find even one example of “over-disciplining” going on. Fact is, you probably won’t find any discipline at all, which is why these schools are so damn dangerous, for both the students and teachers.

“Colleges and universities are to take it a step further by offering students with criminal histories special support services. This is to include targeted academic and career guidance as well as counseling, legal aid services, mentoring and coaching.”

This is stupid and counter-productive on so many levels.

Sorry, no slack for criminals. They chose to commit crimes while the victims didn’t choose anything. Now this out of control administration wants to reward a criminal for committing crimes. Talk about being totally stupid and very dangerous.

If they ban the box, how will they know who needs those extra bennies? Will students have to ‘prove’ they’ve been ‘justice-involved’?

For such a smart guy, Obama is really an idiot in many ways.

On the college campus, where rape is an issue, a rapist or sex offender can apply and not tell the university that they committed a sex crime.

But, the university will still be liable for not asking an applicant if they committed a sex crime in a civil suit.

This is a very weird Catch-22!

I’m trying to figure out how a registered sex offender goes to college. Most require the first year students to live in the dorms. sex offenders can’t live within 1,000 feet of a school.

The lawsuits write themselves. Cognitive dissonance alerts ahead.

I bet the two people that this applies to are really happy. But, one more intervention by the government, one more slap at freedom. I can’t wait for the day Trump takes the office and reverses all this crap.

Another reason to get the government out of public education. Give the students vouchers to spend on the education of their choice. Let the individual have the choice and end the disgusting rat-hole that is public education. Cut the balls off the teachers union.

So Martin Luther King was wrong when he said “judge me not by the color of my skin but the content of my character”? Because having a criminal record does say something about your character.

Only the flawed liberal mind could see this as any kind of solution. A better solution would be to just tell high schoolers how much money they’ll lose over their lifetime if they get a criminal record and can’t go to college and/or get good jobs and then ask if stealing a car or beating up some girl is worth $600k in lifetime earnings or whatever and trust that some of them will make the right choice.

Won’t the math confuse them?

So is it safe to assume that the secret service will not be performing background checks on those visiting the White House?
Shouldn’t minorities have equal access to the White House?

Perhaps there should be no employment screening for the Secret Service. How dare we prevent people with felonies from the privilege of protecting the President’s daughters!

Obama needs to be asked if he is willing to have SS agents who haven’t been vetted. Of course, he’ll obfuscate and just plain lie, but it will show him to be the rank hypocrite that he is.

Gee, it sounds like the Obama administration’s position is that minorities are incapable of obeying the law. How very racist of him.

He may have a point, other than the one on his head: No major media organization vetted Obama for the presidency, so why vet anyone for college student?

Is there anything, anything at all during this administration that has not been linked back to race and racism? Soon, we will become so politically correct that poor grades will no longer be allowed for good grades reflect badly on those with low intelligence and provide an unfair advantage to those people who are smart. In this new politically correct world, we simply cannot allow intelligence to confer and unfair advantage over others (sarcasm). Curiously, however, athletic ability, an attribute in which minorities excel, will never be subject to such absurdities.

There have been two stories in the past week of attorneys at the Obama Dept of Justice acting badly.
http://blogs.wsj.com/law/2016/05/19/furious-federal-judge-orders-justice-department-lawyers-to-undergo-ethics-training/?mg=id-wsj
http://www.wsj.com/articles/the-irss-ugly-business-as-usual-1463700465?mg=id-wsj
I can see that they might need retraining.