Let’s talk about that, Senator. 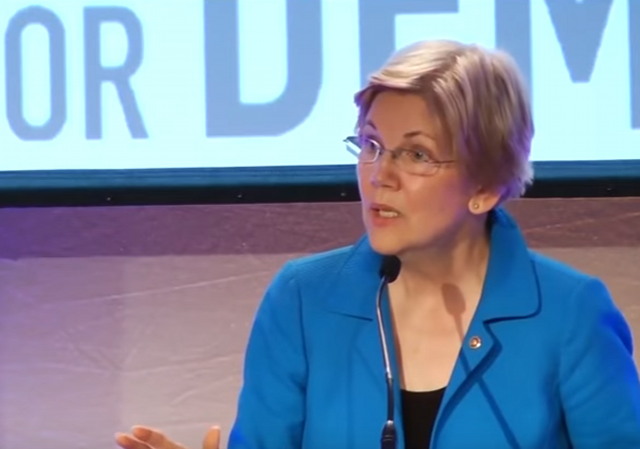 Massachusetts Senator and progressive darling Elizabeth Warren has been very vocal in her criticisms of Donald Trump lately. Her latest line of attack was to accuse Trump of being an insecure money grubber.

Sen. Elizabeth Warren, D-Massachusetts, trashed Donald Trump Tuesday night, calling him a “small, insecure money-grubber” in light of his recently resurfaced comments where he “hoped” for a housing market crash.

“I’ll tell you exactly what kind of a man does that: It is a man who cares about no one but himself,” she went on. “A small, insecure money-grubber who doesn’t care who gets hurt, so long as he makes a profit off it.”

“What kind of man does that?” Warren asked once more. “A man who will never be President of the United States.”

Here’s the video, via CNN:

While Warren hasn’t formally endorsed Hillary Clinton, many people are speculating that her attacks on Trump are essentially an audition for the role of Clinton’s VP.

Either way, Warren’s statement gives us reasonable cause to more closely examine Hillary’s financial situation and hers. Let’s begin with Hillary.

According to a recent report from the New York Post, Hillary has cleaned up in recent years, building a nest egg of $21 million dollars by giving speeches to the big banks Warren abhors:

“Follow the money.” That telling phrase, which has come to summarize the Watergate scandal, has been a part of the lexicon since 1976. It’s shorthand for political corruption: At what point do “contributions” become bribes, “constituent services” turn into quid pro quos and “charities” become slush funds?

Ronald Reagan was severely criticized in 1989 when, after he left office, he was paid $2 million for a couple of speeches in Japan. “The founding fathers would have been stunned that an occupant of the highest office in this land turned it into bucks,” sniffed a Columbia professor.

So what would Washington and Jefferson make of Hillary Rodham Clinton? Mandatory financial disclosures released this month show that, in just the two years from April 2013 to March 2015, the former First Lady, Senator and Secretary of State collected $21,667,000 in “speaking fees,” not to mention the cool $5 mil she corralled as an advance for her 2014 flop book, “Hard Choices.”

Throw in the additional $26,630,000 her ex-president husband hoovered up in personal-appearance “honoraria,” and the nation can breathe a collective sigh of relief that the former first couple — who, according to Hillary, were “dead broke” when they left the White House in 2001 with some of the furniture in tow — can finally make ends meet.

Let us not forget that Warren has also built a small fortune for herself. According to the Legal Insurrection owned and operated site ElizabethWarrenWiki, Senator Warren had a net worth of $14.5 million by the end of 2011.

She made hundreds of thousands of dollars teaching at Harvard, despite the fact that she now claims to care about debt laden college students.

Here’s another tidbit worth mentioning:

Stephen Helfer, a former library assistant at Harvard Law School, in a letter to the Cambridge Wicked Local, asserted that Warren failed to support library staff who faced layoffs in 2009:

Cambridge —Senator-elect Elizabeth Warren says she is a “fighter” for moderate-income Americans (“Warren wins U.S. Senate seat,” CambridgeChronicle, Nov. 8). When given the opportunity to stand up for low-income employees at Harvard three years ago, however, where she has been a tenured professor for almost 20 years, Warren did nothing of the sort.

In 2009, at the depth of the recession, Harvard’s endowment, because of its high-risk investing, decreased 30 percent. The university proclaimed it needed to cut costs and warned low-paid staff of layoffs. Many on campus asked the administration to follow the example of institutions like Beth Israel hospital and request faculty and other high earners to take pay reductions as a means to save jobs.

Several employees at Harvard Law School circulated a petition asking all law school members, who could, to make such a sacrifice. Warren and her husband (also a Harvard Law professor) have combined yearly incomes in the $1 million range and she earned another $200,000 for work she called “part-time” in Washington. During this uneasy period when across campus staff feared for their livelihoods, Warren remained silent.

Warren also nickel and dimed federal courts for access fees. From the Wiki:

Despite a high income and net worth, Warren took advantage of a policy at PACER which provides for fee waivers for academic research based on her standing as a law professor.

Copies of letters submitted by Warren in 2006 and 2008 in the Middle District of Pennsylvania, along with corresponding Orders (plus a third Order in Maryland for which no letter was found) were located through the PACER system.

Warren’s false claims of Native American ancestry are only part of her problem. A much bigger issue is her financial status and the ways in which she has accumulated wealth.

This subject has never been seriously scrutinized by the media and deserves much more attention.

Only then can we talk about who the real money grubbers are.

Doesn’t Warren’s history fall into the same category as Hillary’s history and the global warming “settled science”? The media will say it was all “fully” addressed (ahem) and the results are clear. Move on. No need to bring up the past. For Warren her defenders….I mean the media will argue what she did in 2006 or 2008 has been covered and is in the past.

Whoa, I seem to recall Warren making a boodle by flipping foreclosed homes. Or am I confusing her with some other small, insecure money-grubber? Maybe; all blonde blue-eyed Indians look much alike to me.

A money grubbing race appropriator and labor buster looks to me like.

That should get her kicked out of the Democrat Party according to all the screams of outrage they cast at others.

Liz sure has been in the news a lot lately. I wonder if she’s gearing up for anything?

I bet she doesn’t share the papers she gets from PACER with RECAP.

As an attorney who helped bankrupt companies walk over their employees so the owners could save themselves, she ought to know better.

You shouldn’t speak poorly of Elizabeth Warren, she is a poor Indian who only recently was able to move from the reservation.

So both the shrew and Fauxahontas fault Trump for buying low and selling high. Of the three, who would you want negotiating trade deals for the US?

Use them early and often….they tell a tale.

The nice thing about money-grubbers is that they care about only one color: green.

When they hire people, they are not interested in a person’s skin color, political affiliation, religion, or other triviality. All they want is competence.

Having a money grubber for US President just might be refreshing.

She has perfected the practice of money-grabbing for decades. Umm, not Warren, the other one.

Our fed gov is the biggest money grubber followed by all the politicians who have enriched themselves and their cronies at our expense. Put a sock in it, Lizzy.

Not a huge fan of Trump, but I’ll give him credit here. He has the right personality to expose Warren for what she really is. He won’t back down and as much as the liberal media will throw it back in his face as “war on women” he will deflect it. Cruz, Rubio, or Carson would be hurt much more by the media support of Warren’s bullshit. But you can’t bullshit Trump.

One of the things that tend to happen in elections is that whenever charge is made, people tend to focus on who made the charge, as opposed the charge itself. Attack the messenger, ignore the message.

This article is very good example. Warren made charge against Trump. Instead of examining the charge, half of it focuses on Warren, another half on Clinton. At best, the argument could be made that this common practice, which article doesn’t even try to do.

Any time charge is made, you have to ask yourself if it reasonable or not. If it was delivered anonymously or by someone you like, would you give it credence? If so, then shut up about who said it and focus on what was said, before you become as close minded as you accuse your worst enemies of being.

Back in the day there was a saying about People in glass houses throwing stones. Apply as necessary.

Now if Trump had taken glass beads she would be singing a different tune. Or maybe a red blanket!

He left $24 on the nightstand.

Yep. Do that. The part of the Democratic base which is likely to be hard for Hillary to motivate because it went toward Sanders would be right back if she picked Warren. Well, that, or Sanders himself; but they said enough bad words about each other to make it awkward. Clinton/Warren ticket is easy win.

Being called a name can be fun. When I was four the lady next door added “you little bastard” to my name. Long story, I deserved it. By the time I was seven I thought it was kind of cool even if mom didn’t. She called me that for 50 years and I surely miss her. I’m sure Trump won’t lose any sleep over it.