“I’m focused on my campaign.” 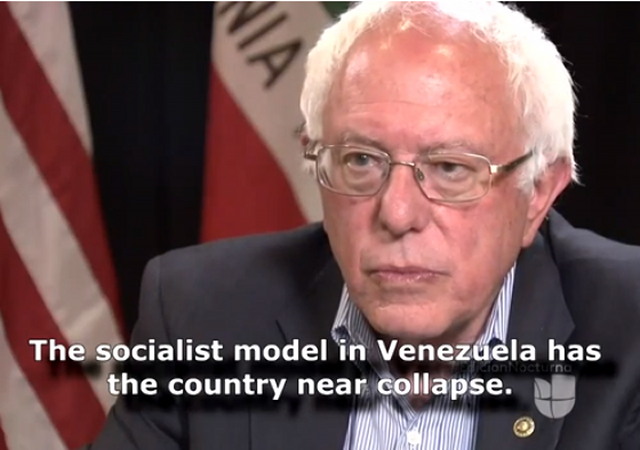 The socialist paradise of Venezuela is falling apart as panicked citizens suffer through shortages of food, toilet paper, electricity and other necessities.

Bernie Sanders was recently interviewed on Univision and the host asked Bernie for his thoughts on the situation. Once again, leave it to someone in foreign media to ask a question no one in American journalism has thought to ask.

Sanders clearly didn’t like where the interview was going. NewsBusters reported:

The Democrats’ socialist candidate for President of the United States, Bernie Sanders, was seriously tripped up this week in an interview with Univision’s León Krauze.

When asked to explain the failure of socialist governments in Venezuela, Argentina and Brazil, Sanders completely clammed up, saying he has an opinion on the subject, but was unwilling to share it, as he is “focused on my campaign.”

LEÓN KRAUZE, UNIVISION: I am sure that you know about this topic: various leftist governments, especially the populists, are in serious trouble in Latin America. The socialist model in Venezuela has the country near collapse. Argentina, also Brazil, how do you explain that failure?

BERNIE SANDERS, DEMOCRATIC CANDIDATE: You are asking me questions…

LEÓN KRAUZE, UNIVISION: I am sure you’re interested in that.

BERNIE SANDERS, DEMOCRATIC CANDIDATE: I am very interested, but right now I’m running for President of the United States.

LEÓN KRAUZE, UNIVISION: So you don’t have an opinion about the crisis in Venezuela?

BERNIE SANDERS, DEMOCRATIC CANDIDATE: Of course I have an opinion, but as I said, I’m focused on my campaign.

When you look at what’s happening in Venezuela, it’s really no wonder why Bernie would rather not discuss the matter. The World Tribune reports:

As Venezuela sinks further into the economic abyss, the South American country has begun selling off its remaining gold reserves.

The country’s gold reserves have dropped almost a third over the past year. Venezuela sold over 44 tons in February and March, according to the IMF. Gold now makes up almost 70 percent of Venezuela’s total reserves, which fell to a low of $12.1 billion last week.

The IMF forecasts Venezuela’s economy will shrink by 8 percent this year, and 4.5 percent in 2017, after a 5.7 percent contraction in 2015. Inflation is forecast to exceed 1,642 percent next year, fueled by printing money to fund a fiscal deficit estimated at about 17 percent of gross domestic product.

Just three years after the death of socialist leader Hugo Chavez, Venezuela — once a leading oil producer — is on the verge of bankruptcy.

Venezuela’s total oil reserves, at an estimated 296.5 billion barrels, is higher than Saudi Arabia’s. But the country is struggling to get investments and technical expertise to convert its oil reserves into revenue.

Instead of taking any kind of action to improve conditions, President Nicolas Maduro has focused blame on the U.S. for what has become an economic nightmare on his watch and that of his socialist mentor Chavez.

Bernie Sanders has been calling for a political revolution in the United States.

The people of Venezuela might beat him to it if things don’t change.

No Collectivist likes to be challenged on the failures of Collectivism, because it fails every time its tried. That is, it fails to do anything it promises to do.

It ALWAYS succeeds in providing HUGE benefits in the form of graft and corruption for a few.

Remember, markets innovate, use resources most efficiently, and raise the standard of living for all.

The Venezuelan situation is even worse than it appears.

Postulate, for the sake of argument, an improbable deus ex machina which straightens out Venezuela’s debt, corruption, and socialist issues, and with the wave of a magic wand sets the country humming along on a proper free-market trajectory. Will that fix everything?

Unfortunately, no. The populace will be shocked to find that the prices for goods are closer to the outrageous black market prices they’d had to endure before all was set right. Of course we know why—any black market is based not, as popularly believed, on piracy, but on basic supply & demand. Black markets are a much closer approximation to the real state of commerce than is any regulatory or price-controlled scheme.

People will complain bitterly that while the new functional economy has fixed the problem of chronic shortages, it has done so at the price of ruinous costs to the consumer. And the next time the polis has an opportunity to vote, it will vote for whoever promises to bring back the good old socialist disaster paradise. The shortages will be forgotten, buried under the outrage over market prices.

The socialist dream is an infection which can outlive the death of socialist reality.

“Black markets are a much closer approximation to the real state of commerce than is any regulatory or price-controlled scheme.”

Again, tom, you prove you are full of shit.

Black market prices reflect the disruption of markets…as a snap-shot in time.

As in the wake of a natural disaster, that is actually a GOOD thing. IF the markets are free to respond, it will cause a flood of goods and services to flow into that demand, in direct proportion to the prices above the un-distorted market prices.

That will quickly…and like magic…result in a return to regular pricing.

It works every time it’s tried.

So, yeah right, of course Bernie will not answer those questions about Socialism’s failures, he has to focus all his energies on preparing his followers for his implementation of Socialism’s heaven on Terra; aka hell on earth.

I’m sure if Bernie is elected, it will be done right. After all, I keep seeing people in news items saying he cares about every one of us.

Critique of the Gotha Program
https://www.goodreads.com/work/quotes/4024969-kritik-des-gothaer-programms

Prior systems, which involved enslvement of some people, have been universally condemned. Slavery has been condemned world wide as a crime.

Karl Marx sought to improve the world by expanding a crime.

FUNNY but Bernie has no dog in Venezuela

what good would it do HIM ?