“She can’t make that general-election pivot the way she should.” 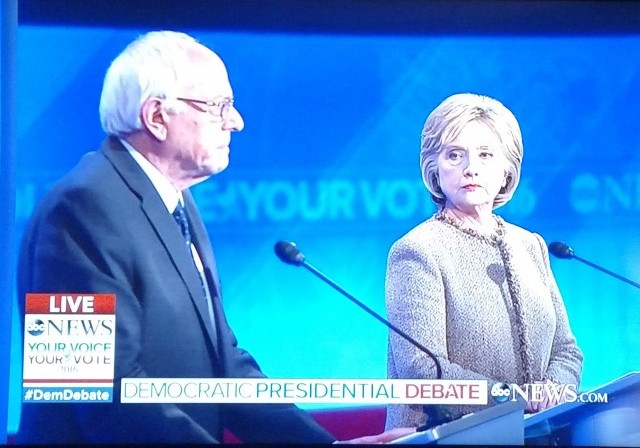 Bernie Sanders isn’t dropping out of the Democratic primary any time soon and that’s starting to concern leaders in the Democratic Party. Unlike Donald Trump, Hillary isn’t able to focus entirely on the general election, which has already begun.

Democratic Party leaders are upping the pressure on Bernie Sanders to drop his presidential campaign, alarmed that his continued presence is undermining efforts to beat the presumptive Republican nominee, Donald Trump, and again win the White House.

“I don’t think they think of the downside of this,” said Sen. Dianne Feinstein, D-Calif., a supporter of front-runner Hillary Clinton and broker of the post-primary peace between Clinton and then-Illinois Sen. Barack Obama in 2008.

“It’s actually harmful because she can’t make that general-election pivot the way she should,” Feinstein said. “Trump has made that pivot.”

The new concerns come after Sanders’ recent wins over Clinton in Indiana and West Virginia. While those victories have provided his supporters a fresh sense of momentum heading into next week’s primaries in Kentucky and Oregon, they did almost nothing to help Sanders cut into Clinton’s nearly insurmountable lead in the delegates who will decide their party’s nomination.

Still Sanders soldiers on, frequently telling the thousands of supporters who attend his rallies that he still has a narrow path to the nomination.

“Please do not moan to me about Hillary Clinton’s problems,” Sanders said in a recent interview with MSNBC. “It is a steep hill to climb, but we’re going to fight for every last vote.”

While people predicted a contested convention for Republicans for months, there’s a distinct possibility that it is the Democrats who will face that scenario this summer.

One of the other things working against Hillary is that Bernie supporters are as revved up as ever.

Hillary Clinton is only 142 delegates short of clinching her party’s nomination, but a large faction of Bernie Sanders supporters who swear never to support the Democratic frontrunner could threaten her general-election chances.

Fired up by trending social-media hashtags like #AlwaysBernie and #DropOutHillary, Sanders voters have not warmed to Clinton despite her commanding lead. An online pledge drive at WontVoteHillary.com has amassed more than 63,000 signatures, and in an exit poll taken during Tuesday’s West Virginia primary, 75 percent of Sanders supporters said they would not back Clinton if she was the Democratic candidate in November.

“Asking me to vote for Hillary is like asking a Christian to vote for Satan instead of Jesus,” Liberalheart posted on Twitter.

“[Clinton] sold her soul to filthy lucre long ago,” tweeted ArtistsforBernie under the #DropOutHillary hashtag.

“‏Nothing could get me to vote for Hillary Clinton, nothing,” tweeted Jay Thompson.

The media keeps hyping divisions within the Republican Party but Democrats are facing a unity challenge just as large, if not worse.

How quickly we’ve pivoted from Inevitable-Hillary to the blame game over who’s fault it will be when she loses.

Whose fault??? Why, Bush’s, of course. Aside from that, Bernie hasn’t drawn blood yet, so not sure why her people should be so upset. (A plug here for Ted Nugent’s video, unless the editors won’t let it through–very “lighthearted” fun…okay, a little disturbing, but VERY funny)

Burlington College announced today that it will close on May 27 after it found itself unable to recover from “the crushing weight of the debt” incurred under Jane O’Meara Sanders, the college’s former president and wife of Bernie Sanders.

Clinton/Sanders ticket and the problem is solved. All the other Clinton VP mentioned thus far are relative unknowns and would be better choices for the future of the party; but with Hillary on top of the ticket, they need to worry about present first.

Health concerns may be the real problem for hitlery if the FBI and DOJ don’t do their jobs.

i re-registered here in #Failifornia, just so i could vote for Bernie in June…

as usual, my vote in the GOP primary would have meant nothing, but helping put a spoke in Shrillery’s wheels brings a small bit of warmth to the clod, dark stone that is my heart.

Hillary is the only person hurting Hillary. Why does the Democrat party stay behind this lying, corrupt, misanthrope?

They have no one else.
Cuomo–damaged goods.
Warren–won’t expose her lying self.
Castro–the nation is not in the mood for the scion of La Raza.
O’Malley–who?
As far as Sanders as VP–ludicrous, he is 73.

How does Bernie get around to these rallies? It’s dangerous to fly when one is on the Clinton’s “to do” list.

And Democrats are hurting America.

Just registered as a Progressive Fascist, AKA Dem, in California. Barney the Communist is a thousand times better than the felon in waiting, Hillary. If there is a God, President Trump will prosecute Hillary and she will spend the rest of her life in prison.

Bernie is just the canary in Hillary’s coal mine . . .

“She can’t make that general-election pivot the way she should.”

You mean, she has to lie out the same side of her face for an extended period before she cancels them with lies from the other? Poor baby.