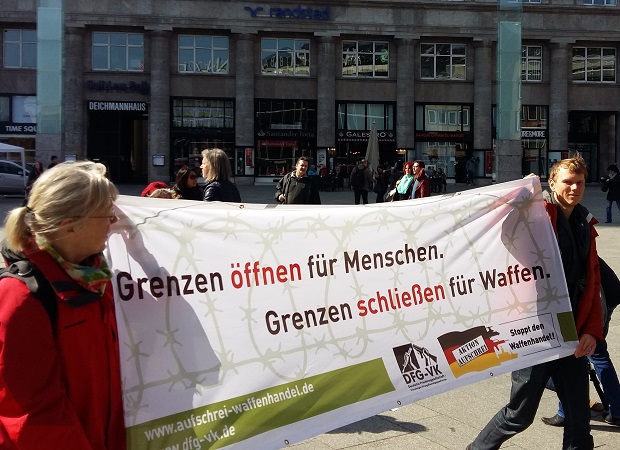 For many Christians fleeing the nightmare of religious persecution in Arab and Muslim lands their torment and suffering doesn’t end when they arrive on the shores of Europe since Islamist bullies single them out for harassment. A detailed study released by the Christian group Open Doors on Monday says that newly arrived Christian refugees in Germany are facing systematic violence, harassment and abuse at the hands of Muslim migrants.

The most disturbing part of the study is the abuse faced by Christians at the hands of Muslim guards inside the German refugee housing. In many refugee housing centres most of the migrants and the security guards are Muslim. The Christian group talked about the prevailing atmosphere of “fear and panic” among the persecuted Christians arriving in Germany. According to a Christian minister from Berlin, Christian refugees must take part in Islamic prayer and threatened if they refused to comply.

According to survey, an overwhelming majority (88 percent) said they have been targeted by other migrants because of their religion. Additionally, almost one-half of survey participants accused guards of discriminating against religious minorities or harassing them.

In Germany’s refugee housing, both the migrants and the security personal are mostly Muslim.

At the Monday press conference, Syrian refugee Fadi S. said he was “shocked” to meet Muslim fundamentalists in a German refugee home after fleeing his country to escape religious extremism.

According to a Protestant minister from Berlin, Christian refugees had been threatened after refusing to take part in an Islamic prayer with other migrants.

The group Open Doors Germany collected testimonies of 231 Christian refugees, most of them coming from Iraq, Afghanistan and Syria. The study found that an overwhelming majority, nearly 90 percent, of the respondents admitted being attacked and harassed on grounds of their Christian faith. Apart from widespread harassment, 37 percent of these Christian refugees suffered physical injuries and 32 percent admitted receiving death threats.

Does the wider German population need to worry about the plight of a few persecuted Christian in some refugee housing? You bet. If left unchecked, what happens today to these handful of Christians and Yezidis refugees within in the confines of the housing centres could well be the fate of the wider German society.

In this enfolding migrant crisis, the refugee centres have acted as a petri dish for the shape of things to come. The months of systematic sexual abuse against women inside went virtually unreported by the mainstream media, before it took to a horrific scale on the New Year’s Eve as thousands of migrants took part in coordinated violent sexual attacks in Cologne and other German cities.

For decades the Muslim populations in the nations of North America and the Middle East have been marinating in the ideology of Islamic triumphalism. Millions of young Muslim and Arab migrant men entering Europe are convinced of their ideological superiority. Those indoctrinated do not aspire to become part of the German society or seek coexistence — as Germany’s Chancellor Merkel would like to have it. They instead aspire to impose the dictates of the all-encompassing Sharia on the Western nations, be it through the willing submission of the adversary or through violent conquest.

As the Lutheran minister Gottfried Martens asked the press on Monday, does “every last Christian [in Germany] needs to be attacked” before the government could get its act together?

The way things are moving in Germany, that isn’t just a rhetorical question but a looming date in a not-too-distant future.

[Author is an analyst based in Germany; Cover image copyright Vijeta Uniyal]

Missing is the all important question. Do the immigrants have the right to use the bathroom of the sex identify with.

Answer thatquestion and the Main Stream Media will investigate this.

Christian privilege, so shut up?

This is why few Christians go to the UN camps.

These persecuted Christians (along with Yazidis and other non-Muslims) are the only actual refugees in Europe. The Muslims who form the vast majority of the unregulated influx into Europe are not refugees but are the perpetrators of the violence in their home regions, which are dominated by “red on red” conflicts.

Syria is Sunni Islamofascists (backed by Obama) vs. Shiite Islamofascists (nominally on the side of Assad). Obama took the Ghadaffi-lid off of the Islamofascists in Libya so now that “country” is unlivable. Obama handed our victory in Iraq over to AQI (al Qaeda in Iraq, now called ISIS), so that country is unlivable. The Pakistanis and Afghans are not fleeing violence so much as the stone age economic destructiveness of their own religious proclivities.

Orthodox Muslims all over the world are choosing to live in their own excrement. Muhammad made a religion out of criminality. The first allowance was theft: “Booty has been made lawful to you,” then rape and sex slavery: “what your right hand possesses,” and most of all murder “until all religion is for Allah alone.” Islam has always needed new territories to conquer because everything they touch they destroy. They are not productive but are thieves and pillagers.

The West used to be able to admit modest numbers of non-orthodox Muslims who wanted to escape Islamic orthodoxy but that is no longer possible. The orthodox have dominated the recent large influxes and are now imposing their totalitarianism first over heterodox Muslims in the west. The west is no longer a refuge.