More controversy only a few months before the Olympic games. 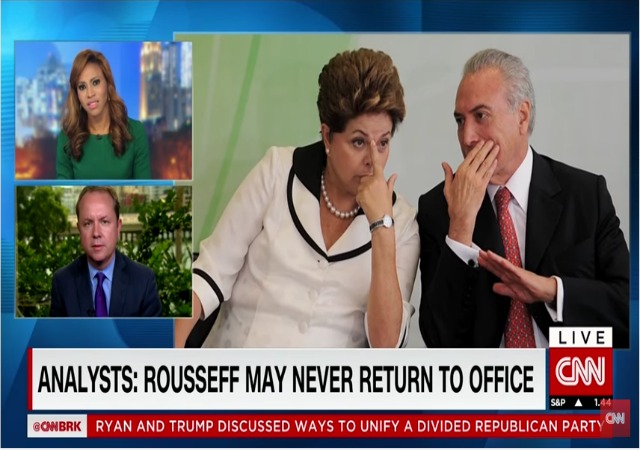 She must relinquish her presidential duties for at least six months.

Rousseff said the actions amount to a coup and called herself a “victim of a great injustice.”

People have accused Rousseff, the country’s first female president, of “manipulating government accounts ahead of the previous election.” She denies she did anything wrong. From CNN:

A sweeping investigation into a multimillion-dollar kickback scheme at the state-run oil company Petrobras embroiled dozens of the country’s leading businessmen and politicians. While she isn’t accused directly of profiting, Rousseff was the chairwoman of Petrobras during many of the years of the alleged corruption.

In December, a bid to impeach Rousseff was launched by the then-speaker of the lower house of Congress, Eduardo Cunha, who argued that the President was guilty of breaking budgetary laws by borrowing from state banks to cover a shortfall in the deficit and pay for social programs in the run-up to her 2014 re-election.

People have also blamed her for Brazil’s recession, the worst since the 1930s. Hundreds of thousands of Brazilians have no jobs while businesses continue to shut down.

Interim President Michel Temer once served as her vice president, but withdrew support in March. The government considers him business friendly, especially after he announced his cabinet with men who share his views. He added “respected former central bank chief Henrique Meirelles as finance minister.”

Rousseff has also screamed “sexism” over the votes along with Brazilian feminists. Planning Minister Romero Juca said the new government chose the cabinet members “on technical criteria and political party affiliation.” He promised they “will have secretariats headed by women.”

The trial means Rousseff will miss out on the 2016 Summer Olympics in Rio, which take place in August. But the recession has caused numerous problems with the games, leading to unfinished venues and stadiums and lack of security features. Construction workers have quit due to late paychecks.

Rivaldo, a Brazilian soccer star, told people to skip the Rio Games because of the corruption, murder, and Zika virus. Forbes called Brazil the murder capital of the world after 22 cities made it on a list of the top 50 most violent cities in the world.

The Olympics should be somewhere safer for women of childbearing age.

to bad our Senate won’t do the same thing…

Terrified of the Lantern of the Light of Reality, the #NeverTrump roaches scattered helter skelter and returned to lurk beneath the ancient appliances, nursing their sore hindquarters.

Great to read about Brazil. And a whole day without some stupid anti-Trump rant. My compliments to the chefs. 🙂 Let’s Make America Great Again and win in 2016!