Will students vote to diminish the value of their own degrees? 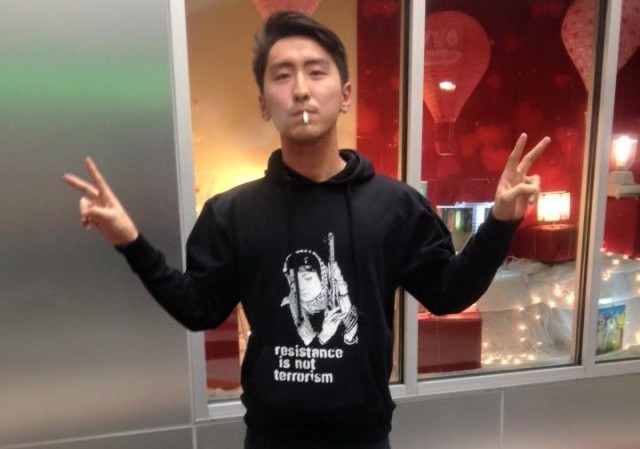 We have covered extensively the goings on at Vassar College in Poughkeepsie, NY, with regard to anti-Israel resolutions proposed by Vassar Students for Justice in Palestine and Vassar Jewish Voice for Peace.

The atmosphere has been particularly toxic, with overt acts of anti-Semitism and intimidation of students who oppose the Boycott, Divestment and Sanctions (BDS) movement. For background, see the Vassar College Tag and these posts:

The short version is that the Vassar Student Association council passed a resolution endorsing the BDS movement, but fell short on endorsing a resolution prohibiting use of student funding for certain companies, including Ben & Jerry’s ice cream.

Both resolutions now are up for a full student body referendum. Voting started today at Noon, and runs through Thursday Noon.

Because of the extensive national publicity about Vassar’s anti-Israel and anti-Semitic atmosphere, the referenda take on added importance for Vassar’s credibility as an institution. I have to wonder if the students recognize that if they pass the referenda, they will be diminishing the value of their own degrees. (added) Even though the Vassar administration has stated it would not implement a boycott of Israel, a student body vote to boycott Israel would send a message to the greater community, including prospective students, as to the atmosphere on campus.

Indeed, in the run up to the referenda, there was another reported act of anti-Semitism which has not received much attention.

A swastika was discovered on a student door — the details remain murky. I did not previously report on it because the details were not verified.  Vassar media relations did not respond to my request for comment. But the Vassar Dean of Students took to the student newspaper this week to defend its response to the swastika incident:

Following an agreed-upon protocol between BIRT [Bias Incident and Response Team] and Residential Life, a Not in My House message was sent to house residents on April 14. The purpose of such a message is to first support those who may have been most impacted by a bias incident and to also respect the privacy of any individual student(s) involved. During this time, various administrators were also in conversation with the reporting student and other impacted students to provide necessary support. We were also considering what impact a broader message would have on the campus community. On April 18, BIRT did, in fact, send an email to the campus community, alerting everyone to the swastika incident. Like all BIRT messages sent to the campus community, it does not mention specific details about the incident … The campus-wide message concluded with a strong message to the community: “Vassar College strives to provide educational, working, and living environments free from discrimination, harassment, intolerance, and hate. Such behavior will not be tolerated.”

The BDS referendum is particularly deceptive, as it does not mention an academic boycott of Israel, but SJP takes the position that if it passes it would constitute an endorsement of the academic boycott. We explained in Vassar anti-Israel activists attempt stealth academic boycott Resolution. I have confirmed with a student active in the issue on campus that there has been almost no discussion of the academic boycott, which would be much more controversial than boycotting Ben & Jerry’s ice cream.

SJP is the driving force behind the anti-Israel movement and the referenda, but it puts Jewish Voice for Peace out front (which is the role JVP plays on many campuses – to present a “Jewish” face to BDS): 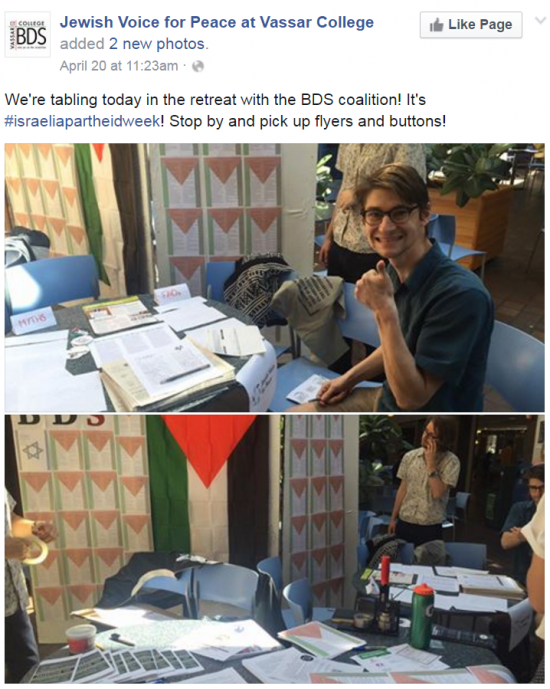 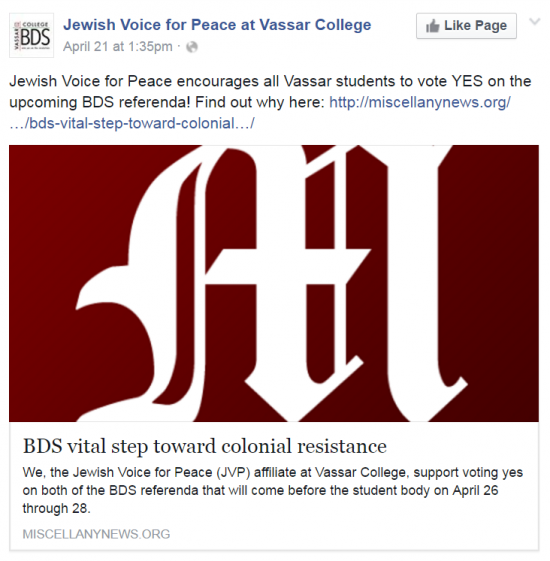 The main opposition is from left-wing J Street U. 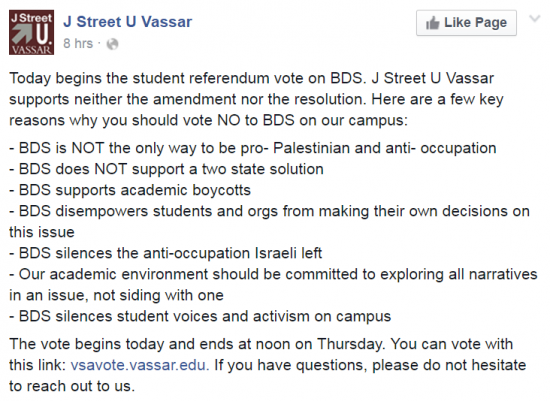 A group calling itself Vassar United (whose identity and origins are unclear) also has weighed in: 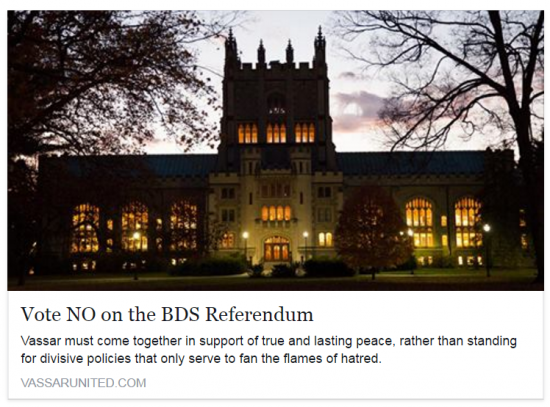 There has been tension between J Street U and SJP, with J Street accusing SJP of smear tactics: 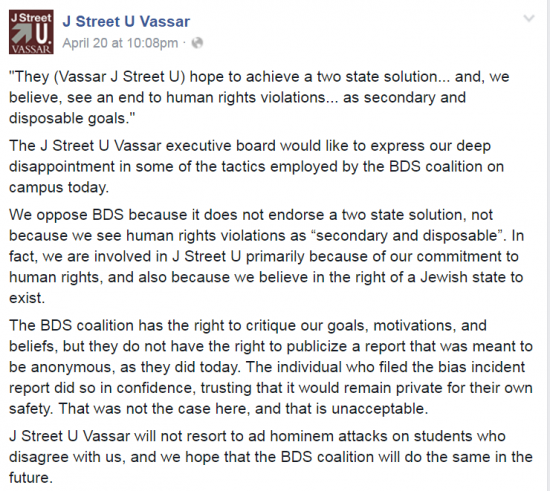 Turnout will be key. One student involved in fighting the referenda told me that apathy may be the biggest problem. After the national media firestorm a few weeks ago, many students have moved on.

Since the anti-Israel students generally are more motivated to get involved, a small turnout generally helps BDS. In places, like Bowdoin, where the turnout is high, BDS fails miserably.

We will report on the results when they are announced on Thursday.

Nice WSJ piece today on BDS and funding of the same.

Who’s the @sshole in the “Resistance is Not Terrorism” sweat shirt? I want his name, so I can ask him: Was it “resistance” or “terrorism” when:

January 1, 1952 – Jerusalem, Israel
7 armed “resistance fighters” attacked and killed a 19 year-old girl in her home, in the neighborhood of Beit Yisrael in Jerusalem.

June 7, 1953 – Jerusalem, Israel
A youngster was killed and three others were wounded in shooting attacks on residential areas in southern Jerusalem.

June 11, 1953 – Kfar Hess, Israel
“resistance fighters” attacked a young couple in their home and shot them to death.

September 24, 1956 – Aminadav, Israel
“resistance fighters” killed a girl in the fields of the farming community of Aminadav, near Jerusalem.

October 9, 1956 – Neve Hadasah, Israel
2 workers were killed in an orchard of the youth village.

November 8, 1956 – Northern and Central Israel
“resistance fighters” opened fire on a train, attacked cars and blew up wells, in the north and center of Israel. 6 Israelis were wounded.

May 20, 1957 – Arava, Israel
A “resistance fighter” opened fire on a truck in the Arava region, killing a worker.

May 29, 1957 – Kibbutz Kisufim, Israel
1 killed and 2 wounded when their vehicle struck a landmine.

November 17, 1958 – Mt. of the Beatitudes, Israel
Syrian “resistance fighters” killed the wife of the British air attache in Israel, who was staying at the guesthouse of the Italian Convent.

April 12, 1962 – Eilat, Israel
“resistance fighters” fired on an Egged bus on the way to Eilat; one passenger was wounded.

May 31, 1965 – Musara, Israel
Jordanian Legionnaires fired on the neighborhood of Musara in Jerusalem, killing two civilians and wounding four.

July 22, 1968 – Rome, Italy
The Popular Front for the Liberation of Palestine (PFLP) carries out first hijacking, diverting an El Al flight to Algiers. 32 Jewish passengers were held hostage for 5 weeks.

February 18, 1969 – Zurich, Switzerland
A pilot and 3 passengers killed by “resistance fighters” that attacked an El Al Boeing 707 on the airport runway.

February 21, 1969 – Jerusalem, Israel
2 killed and 20 injured by a bomb detonated in a crowded supermarket.

May 8, 1972 – Lod Airport, Israel
1 passenger and 5 Israeli soldiers killed during a rescue operation by Israeli commandos on a hijacked Belgian airliner; the 4 Palestinian Black September “resistance fighters” were killed. The hostages were freed.

September 5, 1972 – Munich, Germany
11 members of the Israeli Olympic wrestling team and 1 German policeman were massacred by Fatah “resistance fighters” at the Munich Olympic Games after an unsuccessful rescue attempt by West German authorities.

April 11, 1974 – Kiryat Shemona, Israel
18 killed, 8 of whom were children, by PFLP “resistance fighters” who detonated their explosives during a failed rescue attempt by Israeli authorities.

May 15, 1974 – Maalot, Israel
27 killed, 21 of whom were children, and 78 wounded by PFLP “resistance fighters” in a school, after an unsuccessful rescue attempt.

July 4, 1975 – Jerusalem, Israel
14 killed and 80 injured in Zion Square bombing attack, in which the bomb was hidden in a refrigerator.

June 27, 1976 – Entebbe, Uganda
An Air France airliner was hijacked by a joint German/PFLP “resistance fighter” group, which diverted the flight to Entebbe airport. About 258 passengers and crew were held hostage until all non-Israeli passengers were released. On July 4th, Israeli commandos flew to Uganda and rescued the remaining hostages. All “resistance fighters” were killed, as well as 3 passengers and operation leader Lieutenant-Colonel Yonatan Netanyahu.

August 11, 1976 – Istanbul, Turkey
4 killed and 20 wounded by PFLP and Japanese Red Army “resistance fighters” in an attack at Istanbul airport.

March 11, 1978 – Glilot Junction, Israel
36 killed, and over 100 injured, in a bus hijacking by a female-led Palestinian “resistance fighter” gang.

April 7, 1980 – Kibbutz Misgav-Am, Israel
“resistance fighters” attack children’s house on the kibbutz, leaving 3 dead, one of whom was a child.

August 1988 – Haifa, Israel
25 wounded in a grenade attack at the Haifa mall.

July 6, 1989 – Tel Aviv, Israel
14 killed when a “resistance fighter” steered a bus into a ravine off the Jerusalem-Tel Aviv highway.

July 18, 1994 – Buenos Aires, Argentina:
At least 96 people are killed when a bomb explodes at a Jewish community center in Buenos Aires.

April 11, 2002 – Djerba, Tunisia
A truck explodes near an ancient Jewish shrine of El Ghriba synagogue on the Tunisian island of Djerba, killing 14 Germans, five Tunisians and a Frenchman.

November 28, 2002 – Mombasa, Kenya
Fifteen people including three suicide bombers are killed and 80 wounded in an attack on a hotel near the Kenyan port of Mombasa frequented by Israelis. Missiles are also fired at an Israeli Arkia airliner but miss as it takes off from Mombasa airport. All 261 people aboard escape unharmed.

Nice to meet someone who can think clearly.

I wonder how many of these so-called “students” have actually studied the history of Israel, and of the manipulations of those who call themselves “Palestinians”, though never having been citizens of any entity, except the Ottoman Empire.
That history would relate repeated Israeli concessions, even offers to establish the so-called Palestinian territories as an Arab-governed state, all of which have been refused by the Arabs, whose true and clear agenda is annihilation of the State of Israel.

Well intentioned idealists and fools who are poisoned by people with nefarious intentions, not only against Israel, but the system that affords them the very privilege they feel guilty to have. The dastardly West!

Not realizing that in history, Western values of individual freedoms and rights are the exception. Give it up and things are worse. Human suffering increases. Just look at the plight of women around the planet.

Those who prey on these people resemble the Palestinians and Arabs that sew hatred among their children.

What these people do not seem to grasp is that, because they single out Israel for condemnation, and the extent of their obsession, they come resemble antisemites. If only they would speak out against the abuse of Palestinians by Arabs, or far worse human treatment than anything Israel dishes out.

T-shirt: “Resistance is Not Terrorism.”

An airplane hijacker is a terrorist.

And thus a dork flashing peace signs with a cigarette dangling from his lips is not covered by the Geneva Conventions of Pathetic Posers.

What do you get when someone from Vassar supports Palestine?

Vassaline, or, a slick slope into terrorism.

Students for Justice in Palestine should receive sharia justice, just like people do in Iran: become subjects of “honor killings,” the severing of hands to punish thieves; and, for homosexuals, death by defenestration, being thrown from tops of buildings or hanging from cranes. That’s the kind of justice they promote, wittingly or not.