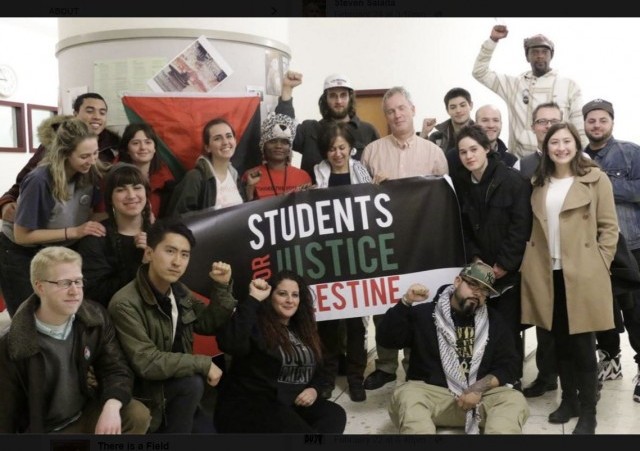 In a vote tonight, the Vassar College Student Association (VSA) council passed by a vote of 15-7 an anti-Israel Resolution which adopts the full BDS movement list of demands and calls for divestment from certain companies. The BDS Resolution was a joint effort of Students for Justice in Palestine and Jewish Voice for Peace.

A student representative of Jewish Voice for Peace stated opposition to the State of Israel, as tweeted by the student newspaper. I have confirmed with someone in the room that the statement actually was made, and that it was by a JVP student: 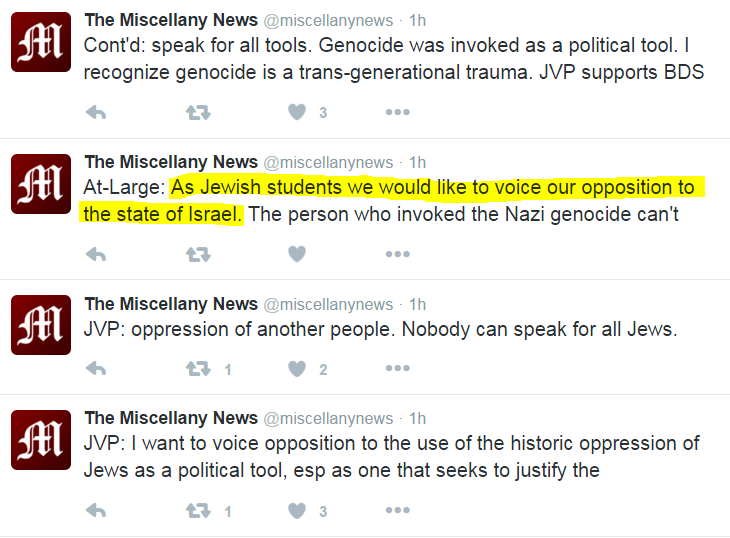 The Vassar administration has already stated it will not honor the student government BDS resolution.

Students can petition to send the BDS Resolution to the full student body for a vote, which could effectively veto the Resolution. The student newspaper states:

At McGill University in Montreal, very recently, a BDS resolution passed the student assembly but was rejected by the student body.

The vote on the BDS Resolution was taken anonymously after the VDS council passed a change to its normal open procedures. An amendment to the VSA bylaws that would have prohibited using VSA funds to purchase goods from those companies failed to achieve the 2/3 majority needed, 12-10.

The fate of the vote likely was sealed when the Vassar administration indicated it might take control of VSA funds away from VSA. From what I have heard from students, that created a situation in which supporting the resolution was viewed as an act of pushback against the administration.

A counter-resolution proposed by J Street U was rejected by the VSA council.

The vote takes place after weeks of campus tension, as reflected in our prior posts (see bottom of this post for list).

Nonetheless, this raises an interesting question.

Our prior posts (in reverse chronological order):

“The vote was taken anonymously after the VDS council passed a change to its normal open procedures.”

Profiles in courage. It does not bode well for the future if these are to be among its leaders.

It is clear that Vassar students lack tactical thinking skills and that any business would be stupid to hire them. I will be keeping an eye out for any Vassar applicants.

It absolutely baffles me to no end that Jews keep voting democratic. I just don’t get it!

Boycott the university. To hell with ’em.

How much damage will these universities endure before the administration finally is willing to step in and put a stop to it? For real?

The JINOs were never brought up in an environment that that taught the proud history of Jews and how Jews have helped in haiti south africa etc.

the great irony is that israel is a country much of the world looks to for inventions, medical research, energy both solar fracking molecular cracking.

israel and Jews in general should tell the europeans and the american student haters to STFU and boycott association with these lunatic instattuions.

Visionaries with a myopic perspective and prejudiced judgment.

They still haven’t located a Mandela figure to take out competing Palestinian factions and legitimize an armed intervention.

Oh, well. People are born liberal, then we discover principles.

I didn’t have a political bend until I got my first part-time job at fifteen. Then I started to head towards conservative.

The social justice movement needs a new platform. Their credibility has been destroyed with progressive wars, humanitarian crises, nurturing terrorism, and anti-native policies.

Boycott hiring any of them after they graduate.

Never before have so many been educated so poorly about the history of so many.

Why should anyone be surprised at foolish behavior by spoiled indulged children at an uber liberal school like Vassar?

BDS supports Hamas. This is what Hamas stands for: http://middleeast.about.com/od/palestinepalestinians/a/me080106b.htm

Somebody should ask every one of the members of the VSA if they have read the founding document of Hamas.

Perhaps it is time to post some of the many lurid quotes from it on campus. I doubt these kids have any idea what they have been suckered into supporting.

Is there any evidence this behavior, even those things that violate existing laws, in any way dampens the federal dollar or donor class gravy train at any public or private university??

I’m of the mind that they continue to get more outrageous simply because there is no force, especially no financial force, as a counterbalance.

Over the past 6 months, the Vassar administration, faculty and the students have been vehemently saying that, despite the presence of campus pro-Palestinian sentiment and anti-Isreal expression, there is no antisemitism and Jewish life is wonderful at Vassar. This comes from among others, Rabbi Kerry Chaplin and Peter Antelyes, head of Jewish Studies and sponsor of the antisemitic Puar lecture at Vassar last month.

UNTIL YESTERDAY, when VSA passed the BDS resolution resoundedly. You do not have to read between the lines of the VSA minutes of the meeting 3/6 (on line at Vassar Misc) to see the overt antisemitism, the pain of the Jewish students, the laughter and derision of Jews by SJP and JVP, and the overall unquestioned acceptance of the concepts of occupation, colonialism,and oppression. Official BDS doctrine proscribes removal of the state of Israel from the map. It is no wonder that Jews at the Vassar campus are distraght today and considering transferring to an institution that is not as politically correct as illiberal Vassar.

What the Vassar students need is a song: https://www.youtube.com/watch?v=TQpfwndO0C0

In Germany it all began
With a separation plan
They sewed a yellow star on every Jew
Now fast forward to today
When there is a plan in play
To separate the nation of the Jews.

You can label all her goods
And in fact perhaps you should
But just make sure you get it right
“From the one democracy
In a sea of tyranny
Shining like a beacon in the night”.

Will you put that on your labels?
And forsake your myths and fables?
Take a stand for truth come don’t be shy
You might lose some misled friends
But you should know that in the end
You’ll be walking with your head held high.

So come walk with us, and hold your head up high
From Israel we’ll buy, buy, buy
Look for that label – blue and white
And take a stand for what is right
And you’ll be walking with your head held high!

Is that Vassar, or Gasser! I ask that because the students that voted for this resolution smell something horrible!

Another superb article Bill and thanks again for your talk at Vassar.

The stage was set in 2014 when 39 Vassar faculty members, who signed a strongly worded open letter condemning Israel and advocated BDS, refused to debate you on the issues. What message does this ‘teach’ students? Pot shots from the grassy knoll? Since 2014, has the administration defines boundaries or offered guidance on ‘hate speech’ to Vassar’s students?

Colleges need to nurture the petals of our little hothouse flowers by providing boundaries and appropriate guidance which creates an environment conducive to cultivating a generation of well-informed critical thinkers with zero tolerance for violence against others. After commencement, when our hothouse flowers have fully bloomed (with massive debt), they shall wake up to the realization that ‘safe-spaces’ don’t exist in the corporate world or the unemployment line…

It’s frightening that this group of intelligent young people could be so grossly misguided and misinformed.