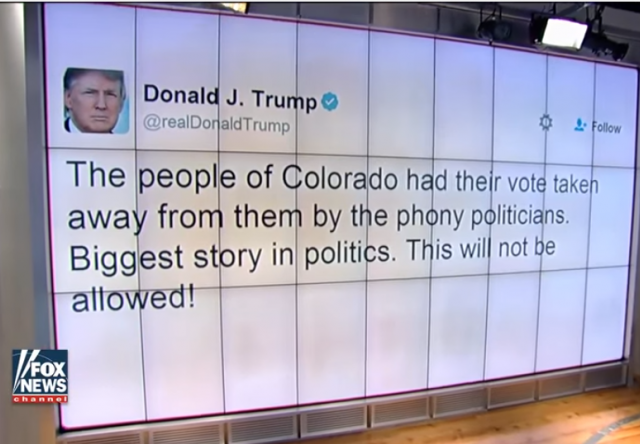 This sweep happened not because the convention was rigged, but because Trump did a horrible job of working the caucus process that led to the convention. Trump all but ignored the electoral process leading up to the convention, and didn’t even bother to go make a pitch himself at the convention, unlike Cruz who gave a speech on stage as Trump surrogates were furiously working to convince delegates to vote for Trump.

Throughout the process, there was no discernible complaint by Trump and his supporters so long as they thought they had a shot at winning, or at least eating into Cruz’s likely win.

Only after it was over, and Colorado together with Wisconsin created momentum for Cruz, did Trump and his supporters start alleging fraud and deceit. This was a classic “change the narrative” Trump ploy, much as he would roll out high-profile endorsements that morning after a debate.

Had Trump done better, there would not have been a peep. This controversy is not about principle, fairness or anything other than Trump losing and fearing his chance to win on a first ballot is slipping away.

If the process was rigged or unfair, the time to complain about the rules was before the process started, not after the game was over and you lost. I accept that a caucus and convention system may not be the most representative, but it’s also not representative to have winner-take-all states where Trump successfully has garnered more delegates than his vote percentage; or even modified proportional states where there is a statewide and district level competition that may garner a candidate a higher percentage of delegates that vote.

Guess who has benefited from this patchwork of state-level selection processes? Donald Trump, who has 45% of the delegates selected so far but only 37% of the vote. If anyone is “stealing” the nomination by following the rules, it is Donald J. Trump.

Instead of accepting that Cruz legitimately won Colorado, Trump tweeted out that the election was fraudulent and voters disenfranchised. That false claim was amplified by pro-Trump media and social media, including one pro-Trump Coloradan who falsely claimed in a viral video that he was improperly shut out of the convention.

Some Trump supporters are now doxxing the Chair of the Colorado Republican Party, publishing his home address and phone number in the spirit of Roger Stone’s threat to hand out the hotel room numbers of delegates to the national convention who “steal” the election from Trump.

That fish rots from the head. Trump personally is the head.

Last week I argued, after Trump’s post-Wisconsin psychotic tirade, It Matters that Trump is a Sore Loser:

I’ve said it before — “Can you imagine Trump in control of the IRS, FBI, CIA, NSA, etc.”

And I don’t want to wake up every morning wondering if our President is mad at us. Eight years of that is enough.

It still matters that Trump is a sore loser; an angry, petty, misleading sore loser at that.

None other than Rush Limbaugh, who has been accused of being too soft on Trump, debunked the theft claim, Ted Cruz Isn’t Cheating, He’s Winning:

RUSH: Now, there’s something else about these delegate fights that have taken place over the weekend where Cruz has just skunked Trump. It isn’t even a contest. It is fascinating to watch. And, of course, the Trump people think that games are being played and that tricks are being pulled. But that’s not happening. This is just somebody who understands the system using it….

Now, what happened in Colorado is, I’m sorry to say, it’s not a trick. What happened in Colorado is right out in the open. Everybody’s known how Colorado runs its affairs. Everybody has known. Nobody just chose to look at it. It’s no secret that Colorado was gonna have a convention and they’re gonna choose their delegates before the primary. It’s not a secret. It’s just nobody leaked it. Nobody talked about it. Nobody bragged about it. So it was left to be discovered by people who didn’t know. And it turns out that people on the Trump campaign didn’t know….

So I don’t see Ted Cruz lying and cheating his way to the convention. I see a lot of hard work. I see some people who know what they have to do, given where they are. They’re in second place in both the vote count and the delegate count. They’re serious about winning. The Cruz team is serious about winning. They have made themselves fully aware of how the process works, and they’ve been out working it for quite a while.

Here’s another explanation of what actually happened, Setting the Record Straight about Colorado’s Republican Caucus:

But apparently, for some Trump supporters, my experience participating in the caucus process is no match for a Drudge headline claiming it never happened. As of the evening of April 10, Drudge claimed on its main page, “Fury as Colorado has no primary or caucus; Cruz celebrates voterless victory.” ….

Many Trump supporters seem shocked to learn that American government is primarily representative in nature, not a direct democracy. Have they never heard of the electoral college? The Founders were very careful to create levels of representation; indeed, it is part of the checks and balances of constitutionalism. All we do in Colorado is keep an extra layer of representation in the process; we choose state delegates who then chose national delegates. One can argue that the caucus system is not ideal for whatever reason, but the fact that it is based on the representative model of government isn’t by itself a very good reason to oppose it.

For pointing out some of the basic facts about Colorado’s caucus system on Twitter, I was deluged by comments from Trump’s supporters, consisting mostly of insults, threats, and wild conspiracies. (For example, some people blamed me personally for the lack of a straw poll, even though I wasn’t even a Republican when that decision was made.) It turns out that such tactics don’t actually improve my opinion of Trump as a presidential candidate.

I’m glad I participated in Colorado’s Republican caucus system. From what I saw, it worked well.

The author of the above explanation tweeted out:

This claim by Drudge is a lie. We CO Republicans voted at precinct caucuses for delegates who voted at conventions. pic.twitter.com/T2GBPI0QaI

Even normally Trump-friendly cable news isn’t having any of it.

And another first hand account, Trump and Drudge Are Lying to You About Colorado Delegates:

Where to even begin with this parade of preposterousness? I understand that Drudge is under no obligation to present a fair and balanced picture and that he tends to highlight conservative victories and downplay our losses. However, this crosses over into sheer untruth with a heaping helping of rabble rousing.

How do I know that it’s untrue? I was a delegate to the Colorado State Republican Convention in 2008 and voted on delegates to the national convention, that’s how….

So, there I was on a cold night in February 2008 at a Caucus in Franktown, CO. I showed up that night with local political old-timer Jon Bond in my pocket who spoke in favor of my being a delegate to the county assembly. After delivering brief remarks placing my name into nomination, the votes and presidential preference poll were tabulated and I was selected.

Thus began the process where I voluntarily sacrificed multiple Saturdays that spring in the pursuit (ultimately) of being a delegate to the Republican State Convention. I remember seeing Mitt Romney speak to the crowd while Ron Paul’s contingent of 12 bearded malcontents marched in a circle on the convention floor holding signs.

The point is this: The reason both Trump and Drudge are lying is that the slate of Delegates to the national convention is voted on, and voted on by real people — not “party insiders” — unless you consider a guy who was at the time a 29-year-old novice a “party insider.” Here is a breakdown of this year’s results.

All it takes is time. The process is totally open and explicable — unless you’re a 69-year-old knothead who thinks that showing up and holding a rally equals “winning.”

Colorado Senater Cory Gardner — the conservative insurgent who defeated an incumbent Democrat in 2014 — tweeted out his outrage at the false claims:

I'm proud of the @cologop and Chairman Steve House for a fair and well run convention. Onward to victory. #copolitics

Spoke to dozens of Trump supporters this weekend, listened to his surrogate speak twice, not 1 person complained abt process until he lost.

.@tedcruz showed up to the @cologop convention. @realDonaldTrump only sent a surrogate. Cruz swept. Elections are won by those who show up.

I've attended CO GOP conventions for years. It requires organization & attn to grassroots to win. Cruz had it. Trump didn't. End of story.

Here are some other tweets of interest:

Trump 2016 and everything it has corrupted in one tweet. https://t.co/dOW8nK7wyH