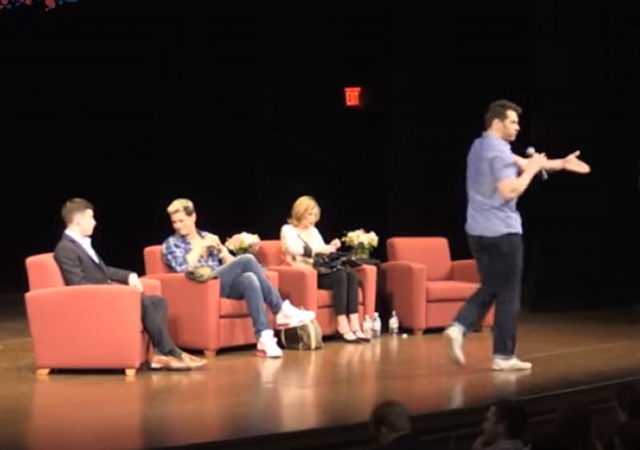 When Milo Yiannopoulos, Christina Hoff Sommers and Steven Crowder visited UMass this week, they were met with protest from social justice warriors. Things got interesting.

But progressives are the real victims.

Wait until the big cuts come.

Colleges campuses have become cesspools of outrage. The massive collective of pampered, entitled snotflakes demanding a string of things given to them by the progressive left. If any of them had a clue, they wouldn’t remember which hand was hand was holding it. The sad thing is that they get to vote.

The verbal bitch-slapping by Crowder was a beautiful thing. And as he stalked back and forth across the stage with his sleeves rolled up there was an implicit threat to kick their asses physically if they asked for it. This type of push back, on both fronts, is exactly what is necessary to take our society back from the progressives.

Crowder is saving the free and not so free world from social justice-inspired economic, social, and humanitarian disasters.

Pro-choice and politically correctness are license to avoidance.

While gender or behavioral bias is characterized by a narrow normal distribution centered on masculine and feminine, humans are genetically and exclusively a binary sex: male or female. Transgenderism is a spectrum disorder that includes homosexual, crossover, and similar, which may be intrinsic or a choice.

Also, while human orientations begin with heterosexual, they certainly do not end with transgender/homosexual, transgender/crossover, etc. However, with the “=” ruling, the State-establish pro-choice church selectively and arbitrarily discriminate against other orientations. I guess pro-choice or selective principles, science, and reality means no regrets or repercussions.

First, they disarmed the babies…

It’s too bad Trigglypuff was edited out of that video. As good as Crowder’s rant was, Trigglypuff showed some real star power.

Crowder did a great job.

But honestly: what is so hard about doing this? And, it’s fun!

If only they could get Milo off the stage. He long outlived his usefulness.