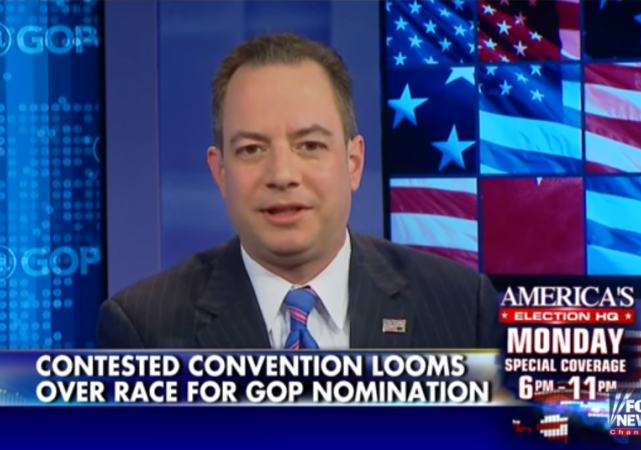 Though Trump is the only candidate to outright denounce the GOP loyalty pledge publicly, both Cruz and Kasich have danced around the issue, alluding to their waning support for the eventual Republican presidential nominee.

When asked about candidates walking back their support for the soon to be determined nominee, Priebus repeatedly claimed candidate threats were nothing more than disingenuous “posturing.”

He went on to suggest that candidates are obliged to support the nominee because of the assistance they’ve received from the RNC throughout their campaigns.

“We’re going into a potentially, we don’t know for sure, but potentially, an open convention. So the candidates I think, are going to posture a little bit as far as what they’re willing to do, and who they’re willing to support and who they’re not. It think people are counting noses, I think the section of delegates is becoming very intense. We’re not just talking about the allocation of delegates, who wins the states, but after that happens, the actual selection of who’s sitting in those chairs and what candidates are now portraying out for the public to listen to, is you know, I think a bit of posturing. I’m not really worried about — in regard to supporting the eventual nominee for the party, they’ve all agreed to by virtue of, in one case signing a data agreement. They’re not going to get the data and the tools of the RNC, and run to be our nominee and tell me they’re not going to support the party. It doesn’t work that way.”

Sounds like Priebus too, is posturing. Nothing about this cycle is like any other election cycle, despite the RNC’s attempts to keep the cats corralled.

Forget a dumpster fire, we’re upgrading the current status of the Presidential race to a porta potty BBQ: 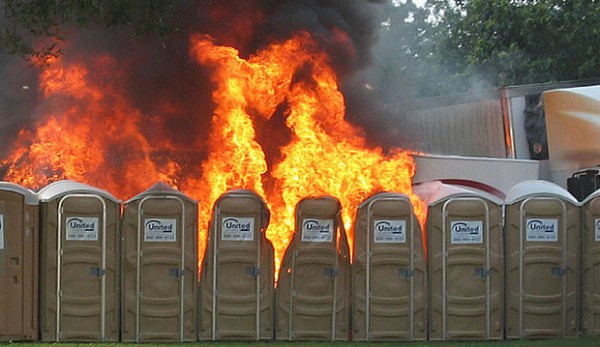 Yeah, the RNC has been nothing but helpful to Trump. Heh

Imagine not having at your fingertips those almighty electoral resources that brought us John McCain and Mitt Romney.

It is the obligation of all good Republicans to support the Party’s nominee. Given the power of Reince Priebus, I find it very unlikely that nominee will be either Cruz or Trump.

That actually raises a fundamental question: what exactly is a “good Republican”?

Not so long ago I thought that was an easy one; a good Republican is someone who opposes the destructive and disgusting policies of the Democrats. That was true when the Republican party was formed specifically to oppose the Democrats about the Missouri Compromise and the expansion of slave state territory, and it should be true today.

If Boehner, McConnell, Ryan, Romney, and Heidi Cruz are what the Republican Party is about now, I can’t see that being a good Republican is a great accomplishment. Even a lifelong nobody like Obama has been able to steamroller them. To successfully fight the Democrats is going to take far more than these feeble apparatchiks can offer. The Republican party has already failed.

The Dems are notorious for enlisting dead people to vote for their candidates. The Repubs are becoming noteworthy for expecting the citizenry to vote for a corpse.

The Republican Party is changing. It is more liberal than the Democratic Party of JFK in 1960. I remember the Democrat’s hawkishness on National Defense and Kennedy’s talk of a “missile gap”.

But the Republican Party is the better and only alternative to Hillary Clinton and the dry rot she will purvey. Look for open borders, unfettered immigration of unskilled labor, ongoing domestic job loss and unemployment, restrictions on coal and other domestic energy sources and a continued loss of national identity under the guise of multi-culturalism.

You make valid points about the Republican Party. Indeed a brokered candidate may allow these problems to fester and grow. But the decay won’t be as rapid as the “fundamental change” of Obama/Clinton.

If the RNC tries to bring someone in other then Trump or Cruz. then all bets are off ….

The delegates themselves run the convention, Zippy, not the RNC, and they typically set the particular rules themselves once it convenes. But given the animosity between Trump and Cruz now, it would hardly be surprising if neither can manage a majority on subsequent ballots.

In which case, the convention keeps voting until someone does reach a majority. If that upsets your narrow view of the world, don’t let the door hit you on the way out.

Is this meant to be some sort of threat or admonishment? “Do what we tell you, or you won’t be allowed to rub our two sticks together?”

As someone who has used the RNC data and tools as recently as the ’14 election, this is one of the sillier things to come out of Star Khan Reince ever. Does anyone remember Project ORCA? I was there. It was a disaster. The RNC’s data and tools will be worse in 2016, without a doubt.

ORCA was the first thing I thought of when I saw that “threat.”

Lest anyone forget, John Ekdahl’s 2012 piece on “The Unmitigated Disaster Known As Project ORCA” stands as a good reminder:
http://ace.mu.nu/archives/334783.php

Sounds like half of the sofrtware projects out there.

Trump’s going to support the nominee as long as he is treated fair, and the only way he loses is with a 70%+ anti Trump superdelage vote, which is not treating him fair.

If he walks, he doesn’t need anything the RNC can give to him. If he walks and goes third party, he will not have trouble beating the GOP in the popular vote (assuming he can get on the ballot).

Actually, Trump needs to win a higher portion of the delegates in the remaining contests to reach a majority.

If the spoiled rich brat sees losing as “unfair,” good riddance to him and any of the trash that supports him. In any event, the GOP is better off without them.

I applaud the upgrade to porta-potty fire. LOL!

Some of that image was cropped, well, in a sense.
http://www.dumpaday.com/wp-content/uploads/2012/08/taco-bell-funny-demotivational-poster.jpg

If Reince is talking tough, it’s the first damn time.

And look at who he’s talking tough against. Maybe he should concentrate on liberals a bit more.

Reince was talking to and about a liberal – the hump.

All those supporting Cruz need to understand this oppo presented in Wisconsin last evening by Gov Sarah Palin because your king has no clothes.

It’s all academic anyhow, because….. (drumroll):

Celebrity Apprentice is one thing, but we’re talking BAYWATCH now. Folks, this race is OVER.

Nide try. Almost had me because of the new Baywatch movie, and his publicity appearances.

A) acknowledge that his further participation in this Primary is merely as a tool to advance the ends of the GOP Establishment,
AND
B) drop out and let Trump crush the Democrats.

I don’t expect his hubris and greed will allow him to do so.

Trump cannot “crush the Democrats” — his unfavorables are simply too high, and polling has consistently shown him being crushed by Hillary in a head-to-head, even before the advent of NeverTrump-ism.

You cannot blame Cruz for that – you can only blame the man himself.

To the Democrat Political Machine, Trump is the most feared man on the planet.

It’s not that GOP Establishment-Bots don’t know anything; it’s that so much of what they ‘know’ is untrue.

We have eyes and ears. Dems attack Trump non-stop 24/7 and likely they’re swapping oppo back and forth with Karl Rove, Inc.

Yeah, the deemocrats fear he will rain down more Health Pills and Power Plums like these…

The Man From WrestleMania, having swung on the Tar Baby of abortion, is NOW conducting an 18 round TELEVISED slug-a-thon…

He cannot shut up.

How can Trump crush the Dims when he IS a Dim?

Donald Trump Is A Republican.

Rafael Edwardo Cruz Is A RINO.

Trump’s party affiliation has changed over the years. Until 1987, he was a Democrat;[3] then he was a Republican from 1987 to 1999.[2] He then switched to the Reform Party from 1999 to 2001.[2] After a presidential exploratory campaign with the Reform Party, he wrote an OpEd in the New York Times stating that he was leaving the Reform Party because of the involvement of “David Duke, Pat Buchanan and Lenora Fulani. That is not company I wish to keep.”[216] From 2001 to 2009 he was a Democrat again;[2] he switched to the Republican Party again from 2009 to 2011.[2] An independent from 2011 to 2012, he returned to the Republican Party in 2012, where he has remained

so yeah he is a republican for now … next week who knows.

If I hear Cruz one more time saying that Trump can not win but he can I am going to throw up!

I doubt he can – Trump surely cannot.

But Cruz is at least a Republican, and a conservative at that. He will not, however, take down the entire ticket with him as Trump would. The Senate might still be at risk, although we’d still have a fighting chance to hold it. And Trump even puts the House at serious risk, not to mention state and local offices.

Only the stupid, the gullible, and the white supremacists are deluded enough to think Trump could win.

Absolutely Cruz can destroy any down ballot if he becomes the nominee. The Dems will make him look worse than Todd Akins.

I should have added Cruz will never be the nominee. Absolutely never.

I haven’t been paying real close attention …
has Trump broken 50% in the vote yet ?

and has his negatives gone below 50% yet …

No. And no. His unfavorables are skyrocketing.

It sure does. Perhaps even whistling past the graveyard. The guy seems to be ’way out of his depth.

And congratulations, the fire photo is first-rate.

Ha the GOPe talking tough then running for the hills and caving…where have I seen this movie before?

Just seeing Rebus’ pathetic face: makes you want to pick up Karl Rove by his ankles and smack Rebus with him.

I’d pay a nickel to see that.

I would double that ….

This fool needs to worry about voters supporting the nominee. Trump is no conservative, and certainly no Republican.

absolutely agree. He has not seen “stay at home” until he sees conservative and republican reaction to Trump nominee.

there are sites that are all in for Trump ..
they believe it will be a Yuge victory for Trump
I have told them not to count their chickens
they also think masses of dems will reject
Hillary and vote for Trump like they are
doing in the primary …
I laugh at them … I am not welcome at more
then a few sites ,,,