Except it’s the other way around 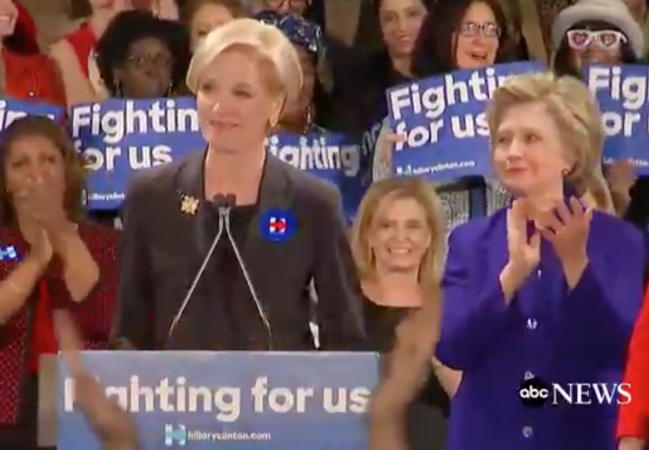 WATCH: @CecileRichards at Clinton rally: “A woman voting for Ted Cruz is like a chicken voting for Colonel Sanders” https://t.co/01YIyQUJEm

I suppose Richards’ forgot that whole thing where Planned Parenthood actually sells baby parts for profit and has to butcher a child, still living, in order to do so. But ok.

The self-awareness fail would be humorous if not for the fact that millions of would-be women die every year under Richards’ watch.

“I believe getting off to a good start should be our children’s birthright, part of the basic bargain that we have with each other as a nation. Every child should have the tools and the skills to thrive in tomorrow’s economy, especially those kids from our most vulnerable and at-risk communities.”

I think the best way to have a birthright and a good start, would be to be allowed to live.

That’s just me, though.

There’s something about that term…birth right…

Sort of calls to you…about something or other…

Planned Parenthood – raising (or is it lowering?) the bar on stupidity everyday!

At least Cruz isn’t a baby-killer.

i wonder if Butcher Richards is aware that Colonel Sanders gag she used was first used to describe women who were against other women carrying guns for protection? Either way, the irony of a Clinton supporter appropriating it is priceless!

“Every child a wanted child”…. oh, sorry… wrong posting… I was thinking about a certain Teutonic country’s position on abortion in the 1930’s… eugenics and such… like Margaret Sanger in US… like Planned Parenthood.

Serving food at the women’s shelter last night – one liberal 60 year old female Church member remarked – “All these poor children running around and the Republicans want to shut down abortion clinics!”

I am stunned that liberals believe aborting black children is the answer. And, say so with impunity.

During a discussion with a co-worker, who was pro-abortion and had a son, I asked, “What if you had aborted him?” Her reply, “I would never have have known, would I?” I was rendered speechless. Heartless.

Oh the irony. Did she say this with a jar of unsold baby parts behind her?

Can someone explain to me how the president of Planned Parenthood, a 501(c)(3) organization, can be allowed to directly campaign for a presidential candidate? It’s not like she was there as a private citizen. She was there in her capacity as the PP president, speaking on the topic that concerns PP, on behalf of a political candidate, which is clearly against non-profit regulations. Planned Parenthood should be stripped of their non-profit status, and of their federal funding.

“Some activities that the IRS has found to violate the prohibition on political campaigning include:

…any statements by the organization’s executive director, in his or her official capacity, that support a candidate…”

They have a c(4) as well for their advocacy and campaign work.

Laws/rules… for the little people.

…for the little people. Can’t be a much smaller than an unborn child.
Unfortunately Hilary doesn’t believe unborn children have constitutional rights. Alien invaders without legal immigration status do.

I came across this article recently, 4 Reasons I Do Not Believe In the Limbo of Infants.
Which included this quote:
“The victims of abortion “are in solidarity with the Holy Innocents.” Their blood supplies their lack of baptism.”

The animal-human equivalence faction on parade.

Progressive science, rights, and morality with religious/moral instruction from gods/emanations in a penumbra/twilight zone.

I wonder how many people share her faith, religion, and profits.

wonder how many female babies are aborted by PP every year? talk about projection, this is it in spades.

As a relative of the Colonel’s grandmother, I find Premeditated Butcherhood invoking his name offensive.