Obama to ‘Scale up’ Fight Against ISIS

Obama to ‘Scale up’ Fight Against ISIS 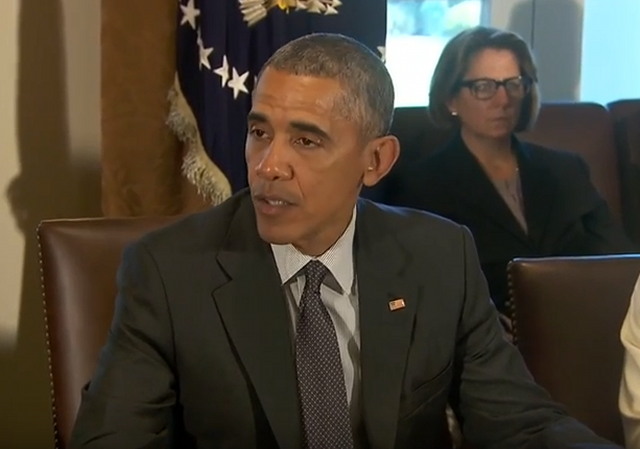 President Obama announced Tuesday that he’s planning to bring a greater fight to the terror group ISIS, saying he plans to “scale-up” the fight.

President Barack Obama said Tuesday that he was looking for ways to scale up the battle against militants in Iraq and Syria ahead of a White House meeting with top U.S. military brass.

The planning session on combating the terror group was not expected to yield major shifts of strategy.

“We continue to take on their leadership, their financial networks, their infrastructure,” Obama said before conferring with combatant commanders and the Joint Chiefs of Staff.

The President cited coalition efforts to block the highway between two cities where ISIS has gained strongholds, Raqqa, Syria, and Mosul, Iraq: “We are going to squeeze them and we will defeat them.”

Before of the meeting, U.S. officials told CNN that one idea for ramping up the ISIS fight would be to send additional U.S. Special Operations forces into Syria, though the notion had not yet morphed into a full-blown option for consideration at the White House.

The U.S. has so far authorized up to 50 special operators to work in Syria training moderate rebel forces battling ISIS.

In Iraq, the United States must get permission from the government for action there, narrowing the options for major shifts in strategy.

Obama was expected to take several of the commanders’ thoughts on fighting ISIS under consideration after Tuesday’s meeting.

Here’s the video of Obama’s remarks:

Many people have suggested over the years that there are no coincidences in Obama’s world. With that in mind, one has to wonder if this widely circulated story from The Daily Beast, published one day before Obama’s announcement, had anything to do with it:

Intel Analysts: We Were Forced Out for Telling the Truth About Obama’s ISIS War

Two senior intelligence analysts at U.S. Central Command say the military has forced them out of their jobs because of their skeptical reporting on U.S.-backed rebel groups in Syria, three sources with knowledge of their claim told The Daily Beast. It’s the first known instance of possible reprisals against CENTCOM personnel after analysts accused their bosses of manipulating intelligence reports about the U.S.-led campaign against ISIS in order to paint a rosier picture of progress in the war.

One of the analysts alleging reprisals is the top analyst in charge of Syria issues at CENTCOM. He and a colleague doubted rebels’ capabilities and their commitment to U.S. objectives in the region. The analysts have been effectively sidelined from their positions and will no longer be working at CENTCOM, according to two individuals familiar with the dispute, and who spoke on condition of anonymity.

The analysts’ skeptical views put them at odds with military brass, who last year had predicted that a so-called moderate opposition would make up a 15,000-man ground force to take on ISIS in its self-declared caliphate. An initial $500 million program to train and arm those fighters failed spectacularly. And until the very end, Pentagon leaders claimed the operation was more or less on track. Lawmakers called the plan a “joke” when Gen. Lloyd Austin, the CENTCOM commander, finally testified last September that there were just “four or five” American-trained fighters in Syria.

Can you imagine what a field day the media would have with that story if Obama was a Republican?

Yet more lies from the current occupant of the Oval Office. The evidence shows that his top priority is nothing less than the destruction of the United States.

I suspect he’s doing this because his Iran deal is going so swimmingly. Obama has become the world’s biggest funder of terrorism when he put billions into the pockets of Iran. So now he’s trying to look tough by ramping up his game against ISIS.

History will not be kind to Obama. Make no mistake though. When the poop hits the fan with respect to Iran doing what Iran does (spreading hell on earth), Obama will find a way to blame it on the GOP and the media will support his narrative.

When history flushes Obama down the toilet, we can only hope the corrupt American media goes swirling down in disgrace with him.

“Obama was expected to take several of the commanders’ thoughts on fighting ISIS under consideration after Tuesday’s meeting.”

Then he’ll go ask Valarie Jarret what she thinks, and it’ll be all wrapped up.

He can go play golf at that point.

It is instructive that something that should be taken for granted – that a C-in-C would consider the thoughts of his military commanders – has to be spelled out when it’s Obama.

Until I get to the first tee!

Al-Chicagi’s idea of ‘Scaling Up’ – more daisys for AK-47 barrels.

Don’t we have to get congressional authorization, a bunch of UN resolutions, and a coalition of 30+ countries first? Or is that only when we have a Republican President?

Funny how he thinks we need to “scale up” even though ISIS is supposedly on the run, or the JV team, or whatever the lie du jour happens to be ~

Does this mean Obama will give the convoys warning of attacks by air only 45 minutes in advance, instead of his customary hour?

It means he’ll put a lid on – for a while, at least – his administration insiders tipping off Isis combat commanders.

This means that in addition to bombing empty trucks and buildings, Obama will OK the bombing of dirt.

All this means is that he has reluctantly concluded that a little more effort is needed to punt this problem to the next president.

he claims he’s going to do something, at the same time he want’s to pull US combat forces out of their Sinai peacekeeping mission, a treaty obligation, because he’s afraid ISIS will attack them.

what a lying, cowardly POS he is.

Obama is acting akin to traitor Kim Philby, who, “under suspicion in the early 1950s, Philby “exposed” two Soviet agents who had already been blown or would be imminently to clear his own name.”

So, which people will Obama sodomize or abort next?