Will the last business to leave upstate NY please shut out the lights? 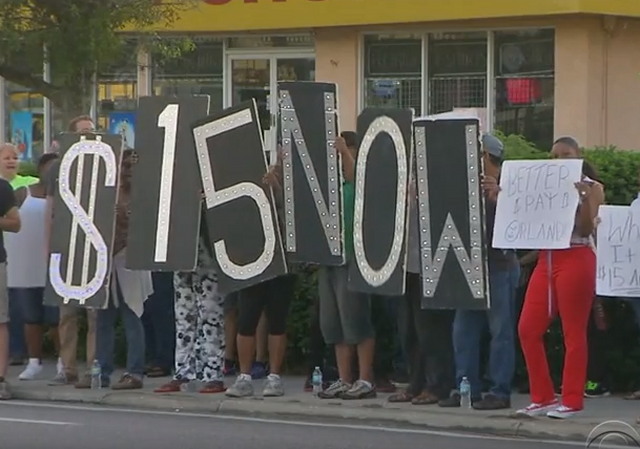 The State of New York just passed two significant measures. One is a new family leave policy and the other is a new minimum wage of $15 an hour.

Liberals are pretty stoked about both items. Smaller businesses, particularly in hard-hit upstate NY, not so much. Expect the people intended to benefit — lower wage workers in marginal industries — to be hardest hit because there will be fewer jobs. Entry level positions, where many people get their start, will be harder to come by.

You say you want a revolution? A political, social, economic policy upheaval that will dramatically alter the playing field for millions of Americans by significantly reducing economic and gender inequality?

Don’t look to the presidential campaign. Look closer to home.

On the last day of March, the New York State Legislature finalized a budget deal that included not only a promise to raise the minimum wage to $15, but also the nation’s newest — and by far its strongest and most comprehensive — bill mandating paid-family-leave time for most employees.

That means that New York has just become the fifth state — after California, which passed its family-leave insurance program in 2002 and implemented it in 2004, New Jersey (2009), Rhode Island (2014), and Washington (which passed its measure in 2007 but has not yet put it into effect) — to mandate paid leave. And compared to its progressive predecessors, New York’s bill is startlingly robust.

There’s much more in this Memeorandum thread.

Here’s a video report from CBS News. If you watch to the end, you’ll see that there are some people who are concerned, namely small business owners, also known as job creators:

Seattle was one of the first places to raise the minimum wage to $15. Let’s see how things are going there.

Mitch Hall of The Federalist:

70 Tries After Seattle Raised Its Minimum Wage, I Still Can’t Find A Job

My opposition to minimum wage increases comes as a direct result of my own experience searching for jobs as a new resident of Seattle, Washington, a city that currently has one of the highest minimum wages in the nation. In June 2014, the Seattle City Council, composed of just nine members, unanimously voted to increase the city’s base pay to a whopping $15 an hour, to be gradually implemented over the course of several years…

In December, I found myself needing a break from college, for a variety of reasons. So at the close of last semester, I decided (rather impulsively, as young people are wont to do) to take my spring semester off from the College of William and Mary and move out west to try my luck in Seattle, a place I had only visited once before…

Having a combined two years of serving experience and close to five years of total experience in the customer and food services industries (which is literally as much as you can ask for from a 20-year-old college student), I assumed I’d be able to find a restaurant gig in no time. So, after reassuring my parents all would be well in the financial department, I boarded a plane in Philly a few weeks later and made the move.

Yet seven weeks and more than 70 job applications later, I still have yet to land a part-time, minimum wage job. I’ve spent the majority of the last two months stalking online job sites and entire days traversing the various neighborhoods of Seattle, filling out applications and inquiring about job opportunities at any restaurant, coffee shop, retail store, or other service-oriented establishment I can find.

Coming soon to a city near you?

Boy, what cheerleader wrote that NY article? You have to wipe the drool off to read it. I realize that “journalists” no longer have to restrict themselves to facts these days, but an article like that honestly belongs on the op-ed page ~

It was probably written by a union PR person. Literally. They sent the copy to a “journalist” for the New York mag, and they maybe massaged it some, then sent it in as their own.

Gari Britt keeps chanting that “trade deals” are responsible for job losses in the U.S.

That is not true, and in fact the reverse IS true.

Things like this and the explosion of the regulatory state in the U.S. over the last 30 years are the real culprits. Along with the decline in American families as a nuclear unit with a married dad and mom, with kids who come home to a parent and homework, and who interact with someONE, and not an electronic game.

People who provide essential or near-essential goods or services like the gas station owner can stay in business by raising prices. Others cannot.

It would be interesting to know what the impacts on New York agricultural will be in terms of a minimum wage. Up-state New York is actually very agricultural. This may kill a lot of that.

Gary knows that Trump will have no problem bringing in H2B workers — been doing it for years.

Given the pace of technology, automated kiosks to place your order will be joined by robotic kitchens to cook the hamburgers and fries. The $15/hr minimum wage is just the thing to start that ball rolling.

Problem is, given this country’s educational system, the jobs to create and program the robots will be going to foreign labor while the profits go to Monied Elites.

Flashback decades to the original proposal for family leave and the sponsors promised thus would never lead to paid leave. Isn’t amnesia wonderful?

Minimum wages go up, cost of living goes up, minimum wage goes up….. productivity go down… the Left prides itself on being “green” yet practices the economic equivalent of logging’s clear cutting… this time…. of the economy.

This is beyond Thatcher’s statement of socialism is great until you run out of someone else’s money and more akin to running out of paper for IOU’s.

How many widgets, candles, packs of incense, healing crystals, hamburgers, pencils or any other products(or services) do you have to sell each hour, every day to pay each worker 15 bucks/hr and how much will each product necessarily increase in price? How willing will consumers be to paying increased costs?

This is not really rocket science.

What I have not heard much talk about is how these minimum wage laws may increase unregulated & black market activities.

If an established restaurant or donut shop can only offer $8.00 single patty burgers or $4.00 donuts due to imposed labor costs, and a dozen cars, carts and vans are selling burgers, donuts and whatnot on the street illegally for a fraction of the cost without paying taxes or paying attention to health codes, then what is really going to happen?

I can really see someone in the parking lot at McDonald’s tailgating and selling burgers out of his car.

If the State is a tyrant, doing everything you can to hamper its operation is a duty.

NY doubled down on the state tax on cigarettes to the highest of all states by touting the need to curb the smokers habit. Now at $10/$12 per pack, what the tax accomplished was to deprive a large number of small Mom and Pop stores of a goodly share of their profit margins and a huge and illegal black market that thrives in both urban and rural areas across the state. And it’s biggest customer base are the ones who demand a $15.00 an hour pay rate. Go figure!

This issue was raised by a major pizza chain (Godfathers?) face to face with Bill Clinton when Clinton was saying just add more cost to the pizza. There are necessary and discretionary spending….people do not need to buy more expensive burgers or widgets … they may want to but may need to do without. Don’t forget as costs go up taxes go up…. Where does it end? The economy is like a renewable resource where a small part can be taken out as long as the bulk is sustained….. as I noted in earlier text…. clear cutting the economy leads to fallow business opportunities, eroded and washed out sectors. The Left wants to legislate a perfect workers’ paradise

I fully support states raising their minimum wage to $15.00 per hour.

Only liberal states have or will do this. Most of these liberal states are already seeing a mass exodus of their citizens and businesses due to previous burdensome regulatory overreach. Via a sort of natural selection, only the smartest and most capable will successfully make the move, while the weakest and most accepting of bad governance will remain behind. At the same time, these very same liberal states are increasing government benefits, attracting spongers from less liberal states and keeping their own spongers in place. In liberal states, taxes and living costs can only go up, while the standard of living is driven down. Eventually, their failures and bankruptcies stand as living examples of the failure of democratic socialism as a political/economic system.

Added bonus: once SJWs and other subversives taste victory with new benefits, increases in existing benefits, and near doubling of the minimum wage, do we suppose they’ll say, “thanks, we’re good now, no more demands, thanks again”, or do you think they might demand more in due course? It’s a trainwreck in an avalanche rolling down into a flood with an tsunami approaching, therefore…

I fully support states raising their minimum wage to $15.00 per hour.

Doomed to Implosion…Why drag it out?? With the corporate welfare NY hands out by giving a pass in the courts or tax abatements to the profitable and playing banker for government, why stop at $15.00, make it $20.00 or even $30.00 an hour. The results are the same for those who are marginalized by government micro management, only the time line for getting there will be quicker and perhaps less costly and painful to those paying the price of enduring it.

I wish this was so clean cut, but amongst the departing are those infected with lower level progressive thought….once planted in “red” soil begin to spread small doses of blueness that eventually weeds up the place. They bring along foreign baggage…. needing a mini-mall here, a progressive law there and soon their neighborhood, then their county,then their new state begins to turn purple and then blue. …and withers. Eventually we need to treat new-comers not as fellow citizens but as risky immigrants. I never appreciated why in some areas it took years to become locals…and now I know why.

Ain’t it wonderful how people are willing to experiment on themselves!

YAY! This means more opportunity for armed robbers as 24 hour stores cut the 2nd person from their graveyard shift. Maybe that was the reason so many “democratic socialists” voted for the bill?

Financial games and progressive debt. New York is truly blessed by gods from the twilight zone.

There is a lot of technology that is just out of the range of economic feasibility at present, robotic fast food ordering and the like as one example. Guess what? It’s now economically feasible compared to paying at least $15 per hour. In most restaurants, as far as expenses go, labor costs are the elephant on the ledger.

Next time you’re in a fast food place, lean over and peek at the register screen. Most of them have to use pictures of items on the menu because of literacy issues among minimum wagers that typically work there. Employee turnover is a nightmare, because minimum wage means very young or very old (retired) employees, and they tend to quit, change jobs, move on. You only have to train a robot once, it receives no pay or benefits, won’t fake injuries for workman’s comp, and rarely calls in sick at the last moment. (Yes, I’ve owned restaurants).