Neil Cavuto is an amazing man

Neil Cavuto is an amazing man

Go forth and be inspired 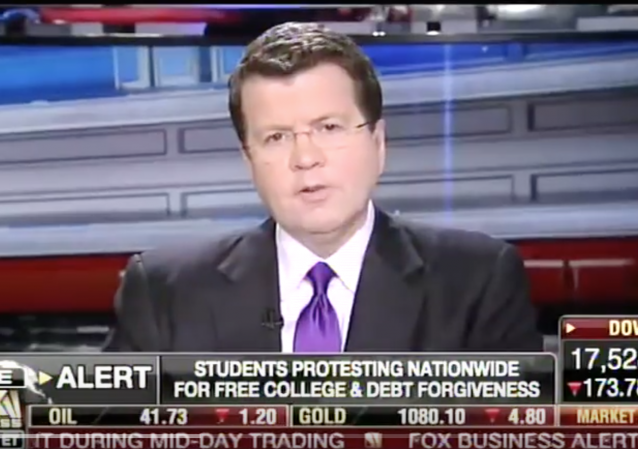 The gravely-voiced Fox Business anchor has always been one of my favorites (as far as news anchors go) for one reason — he’s consistently gracious, even-tempered, and fact-oriented, even with the most ridiculous of guests.

Yesterday, Cavuto published on article on LinkedIn, talking about his life with Multiple Sclerosis.

He was diagnosed with MS after surviving cancer, and has gone on to have a successful career, though not without obstacles. More than once he’s gone blind on air, and suddenly been unable to walk. His solution? Adapt.

“Focus on what I can do, not what I can’t do. And if I can do a lot, so can lots of folks dragging far heavier anchors than this particular anchor. I wish I could be more profound, but I’ve got a show to do, and all of us have lives to lead,” he concludes.

When I was first diagnosed with Multiple Sclerosis, I knew little about the disease. I guess I was just relieved it wasn’t the advanced cancer I had battled and beaten just a few years earlier. That one darn near killed me. What I didn’t realize was this new illness would completely redefine me and my role at work.

I’ve heard MS described as a mercurial menace in that it can rob senses and muscles indiscriminately, anytime and anywhere. It’s a disease that doesn’t much care about what you’re doing when one, or several, of its infamous exacerbations hits. All I know is it hits hard, and to this day, I never seem quite ready when it does. Over the years, it has literally taken the legs right out from under me. There are times when I can’t walk, other times when I am walking as if I’m dragging an anchor, as I’m trying to “be” an anchor.

Its vagaries are as weird as their fallout is fast. Mid-shows, I’ve been blinded, literally, as my vision is all but blacked out. Adjusting to that alone took years. I’m now at the point I no longer use a TelePrompTer at all, not because I’m smooth, but because I have no choice. I’ve taken to memorizing scripts and bullet points, even guests’ points of views and myriad of segment facts, so I’m ready for anything, any time. These weren’t choices I wanted to make; these were choices I “had” to make. It’s all about compensating — and recovering. I’ve gotten pretty good at this, or at least faster reacting to this — adjusting for muscles that might suddenly fail me or a brain that might short-circuit on me. It’s always the same drill — work with what works in my body, and don’t panic over what’s not.

Don’t get the idea I’m some unique talent; it’s more like a desperate gambler trying not to have others see my very weak hand. MS is about playing on with the cards you’re dealt — and just dealing.

Long gone are the initial days with this disease when I was forever lashing out and feeling like a victim. For one thing, my wife wouldn’t hear it. And for another, I just got tired sounding like the self-absorbed TV anchor I was, constantly whining about it.

When asked about the inherent unfairness of life, John Kennedy famously said: We all breathe the same air, but we are not all given the same time to breathe it. He was describing the randomness of a soldier killed in battle to another assigned a safe desk job half a world away. Such is fate. Such is life.

You can read the rest of the post here.

Go forth and be inspired. I know I am.

He’s quite remarkable. He has done an amazing job of presenting himself as not being ill at all. I don’t know how he does it. It is very inspiring.

I always thought he was good, but…just damn. I had no idea.

always liked him. iirc (I could be wrong) he also had to overcome severe stutter to get to this point in his career.
may not always agree with him but have always respected him.

I had no idea. Good on him!

I had no idea he was suffering so terribly. I had quit watching his show because the way he interrupted his guests drives me nuts, but maybe it’s because he can’t hear or see or some other debilitating reason. My hat’s off to such an inspirational person.

Our local vet has MS, and it’s heartbreaking. His left arm hangs limp at his side now so he has learned to give sub-Q shots using his good arm only without pinching up the skin. His left leg barely works. He hires other vets to perform surgery for him. He always has a good and cheerful attitude and just keeps on going. I am so humbled…

I had no idea he had such serious medical issues. Hats off to you, Neil.

I’ve known about Cavuto’s MS for several years. He’s also been one of my favorite TV anchors. He is always, as Kemberlee says, gracious, even-tempered, fact-oriented; and he has a wry sense of humor. May he enjoy life, and do a great job, for many years to come.

The thing about Cavuto and his big head (if you watch the show, you know what that means) is that he takes his topics seriously, but never himself seriously.

His self depreciating sense of humor and intelligence is what I think all anchors, hosts and commenters on television should strive for.

Smart as a whip and overly gracious, Cavuto is someone others can learn from. Even when he is disagreeing with guests, he is not disagreeable.

Truly a class act as far as what I have seen.

My niece has MS, she was diagnosed during her 4th pregnancy about 2 years ago. She too is struggling with work and 4 young children, but she has an amazing husband, inlaws, and of course parents (my brother and SIL) and siblings.

She rarely complains, and she too does not want to be known as a patient, as a sick person, as “the girl with MS”. She pushes herself on all the time.

I’ve forwarded her this article. I hope she finds hope and inspiration from it.

Neil Cavuto truly is amazing, as you say. I would never have guessed that eh has such a debilitating illness. He covers it very well. I wish him long life and good (or better) health.