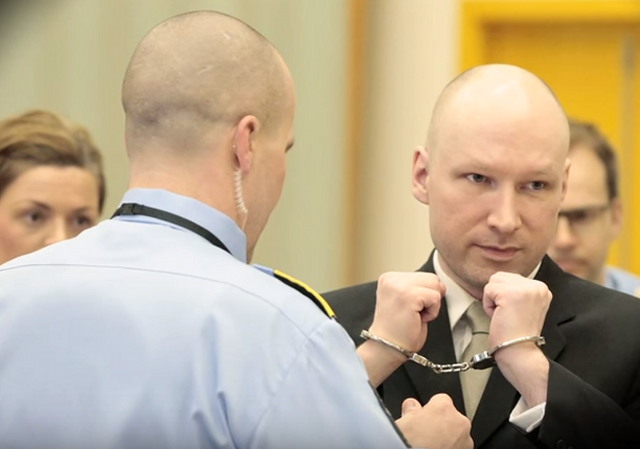 Anders Breivik, the mass murderer who killed 77 people during a rampage in 2011, has successfully sued the government of Norway for violating his civil rights by keeping him in solitary confinement and searching him.

Norwegian mass murderer Anders Behring Breivik has won part of his lawsuit against the state over his solitary confinement in a high-security prison, a court announced Wednesday.

The Oslo district court found the 37-year-old’s treatment in prison violated Article 3 of the European Convention on Human Rights, prohibiting “inhuman or degrading treatment,” and ruled that his conditions must be eased.

The court also ordered the government to pay legal costs of 331,000 kroner ($40,600) for the right-wing extremist, who killed 77 people in a shooting rampage and bombing attack in 2011.

Norway has the right to appeal the ruling. It has not announced whether it intends to do so.

The court dismissed Breivik’s claim that the government had violated Article 8 of the European Convention on Human Rights, which guarantees respect for “private life” and correspondence.

The ruling outlined areas of concern in regard to the conditions of Breivik’s confinement, which, taken as a whole, constituted a breach of his rights.

These included the duration of his isolation, and inadequate consideration of the mental impact of the regime. It also said the routine nude checks Breivik had to go through were not sufficiently justified from a security perspective.

Watch the video below to see the conditions in which Breivik lives. Norway prison cells look like ivy league dorm rooms:

Breivik lives quite comfortably for a man in prison. The Daily Beast reports:

Breivik’s private prison compound consists of three personal cells: “one for living, one for studying, and a third for physical exercise,” according to Agence France Presse.

The studying space is important for Breivik: in 2015 he enrolled in political science courses at the University of Oslo. A university representative will visit his cell to teach the classes, as Breivik is not allowed to access the Internet on his in-cell computer.

“If it were theoretically possible to develop rheumatism, I am convinced that this rubber pen would be capable of causing it,” Breivik wrote in a letter obtained by the New Yorker. “It is a nightmare of an instrument and I am frustrated by its use.”

From the confines of his three-room cell, Breivik is able to do his own laundry and cook, even making a gingerbread house for a prison competition, the BBC reports. He has access to an exercise yard, newspapers, and phone calls.

It’s a pity his victims can’t comment on the situation.

It’s a pity his victims can’t comment on the situation.

Exactly my first thought when I read your headline, Aleister.

Just wait until he finds out that there exists a playstation 4! He’ll have to sue the government all over again.

Wonder how many Muslims are in that prison’s GenPop? Wonder how long he will last in GenPop.

His prison is better than my apartment.

I’d ease his suffering with a nice, clean firing squad.

Sadly, rather than your marvelous solution, Anders Behring Breivik will be let out after serving only 21 years because that is the max time someone can serve for mass murder in Norway.

Yep. An unassailable argument for the death penalty. The guy should not be allowed to have a “carbon footprint”. At. All.

But cheer up, it could be worse; the court hasn’t required them to provide him his own personal shooting range.

You can’t make this stuff up! Just wait ’til some US SJWs find out.

OK, let us start by admitting that this is an offense against justice AND common sense. No problem with being upset about it at all.

But being the cynic that I am, I have to be amused.

Every few weeks, we in the US hear about some EU court ruling or EU decree that either overturns local, common sense law in a European country, or dictates to them what their local law will be and how it will be applied, with no input from those who have to live under that law. Read Brit papers and you will get it daily. Tyranny is what the EU does.

Who supports this interference in Norway? The Norwegian Left. Including specifically their Socialist party [“Norwegian Labour Party”]. Exactly where did Breivik commit his massacre? On the island of Utøya, which is owned entirely by the Norwegian Workers Youth League, which is the youth branch of the Labour Party. The island is the home of the annual summer camp to train and indoctrinate young Norwegian Socialists to become activists for the Labour Party. And that camp, and the students and cadre within, were what Breivik attacked.

You can be sure that Norwegian Socialists are not happy about this ruling. But it is their own work to subordinate their country to Brussels that made it possible.

I was just given to understand that the word “petard”, as in hoisted on one’s own petard, is the same in Norwegian as it is in English.

General pop is gonna be such a surprise for this person.

He breached the leftist bastions of anti-native factions, progressive liberalism, etc., and the people’s response has been quick and overwhelming, if not yet conclusive.