“What the hell did I do? Killed them all, of course.” 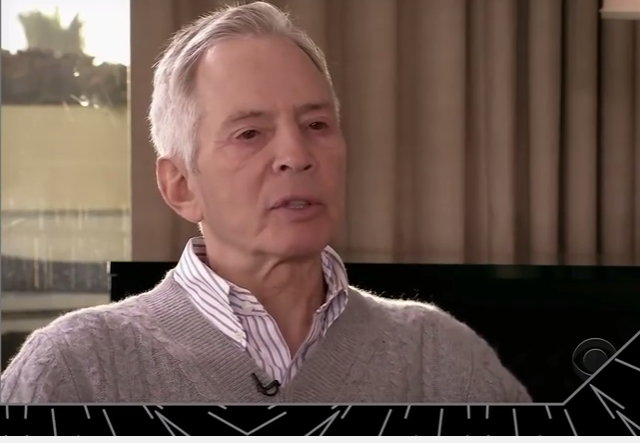 Unwinding after a day of regulatory analysis and political opining, I often read true crime novels.

A compelling one I just started is In He Killed Them All by Fox News Channel host Jeanine Pirro. Pirro’s book engagingly and brilliantly details her experiences trying to bring suspected murderer Robert Durst to justice for the deaths of his first wife Kathleen (Kathie) McCormack Durst, Morris Black, and his longtime friend Susan Berman.

The title of the book stems from the dramatic conclusion of the popular 2015 HBO series that centered around these cases, The Jinx: The Life and Deaths of Robert Durst. During the last episode, after being confronted with some damning evidence in the form of letters, Durst headed to the bathroom to regain his composure.

Unaware he was still wired for sound, he muttered, “What the hell did I do? Killed them all, of course”.

In March of 2015, the night before the final episode aired, Durst was arrested in New Orleans by the Federal Bureau of Investigation (FBI) on a first degree murder warrant obtained by the LAPD in connection to the 2000 death of Susan Berman.

He also faced weapons charges, based on a search of the hotel room in which he was staying. Durst just accepted a plea deal on the those charges and was sentenced to seven years and one month in prison.

But that’s not all. He is now on his way to Los Angeles to face murder charges for Bermen’s death.

The New York Times reports that Judge Kirk D. Engelhardt approved a defense motion in federal court on Wednesday to send the 73-year-old to Terminal Island minimum-security federal prison outside Los Angeles. The prison is noted for past infamous inmates including Al Capone, Charles Manson, and Timothy Leary. There, Durst will “await formal arraignment by August 18 on murder charges in the killing of his confidante, Susan Berman.”

Durst, who entered and left the courtroom in a wheelchair, expressed anticipation about the move to the West Coast, telling the judge that he has been “wanting to get to Los Angeles for almost a year to enter my not guilty plea.” According to Reuters, Durst continued, “I truly, truly want to express my statement that I am not guilty of killing Susan Berman.”

I suspect that the bathroom rant in The Jinx will be featured in the upcoming trial.

Durst’s lead defense attorney, Dick DeGuerin, called all of these arrangements “a compromise.”

Part of the deal is that prosecutors won’t share their case until after Durst arrives, which frustrates the defense. But the Houston-based attorney noted “we got a lot out of it. He won’t be prosecuted anywhere else but California; he won’t be prosecuted in New York or sent to Angola,” Louisiana’s largest and most notorious prison.

Let’s hope the Los Angeles trial ends with justice being served. We really don’t have a great track record of it when it comes to celebrity murder cases.

Is it a book detailing an ostensibly true story, or is it a novel?

Can’t really be both.

Think of the Shaara novels about the Civil War. They are accurate as to locations, events and the involvement of historical figures but the dialog and especially any character’s inner dialog is the writer’s invention. In a true event novelization minor characters may also be consolidated, leaving the “what happened” part of the story accurate while reducing the “who” to a manageable number of names for the reader seeking entertainment to follow.

Isn’t it sad that the Times paints the investigators as good and holy while they lament the excellent investigations of Project Vertitas.

There is often something compelling when a spouse is murdered.

I recently stumbled upon a book about the “trial of the century” in my hometown when I was eleven years old and was amazed at how much I remembered about Carol and T. Eugene Thompson.

Fifty years later it is still a great story. It began looking like a home invasion gone lethal and turned into a murder for hire by her husband, who was the chair of the criminal law committee of the Minnesota Bar Association at the time. First he had insured his wife for what would be over $6 million today. Then he told a former client to make it look like an accidental drowning in the master bathtub.

It went wrong when the former client- a prime suspect in an earlier murder- sub contracted the hit out to a burglar with a drug habit who then got high to steal his nerves for the deed. The burglar later sang like a bird. There was no deal, either. He talked because when sober he could not live with what he had done. The case broke after another burglar dealt the killer’s name to the cops. When the two burglars had gone drinking together he had blubbered over and over that she just wouldn’t die.