Home many homes could have been built with the cement Hamas diverted? 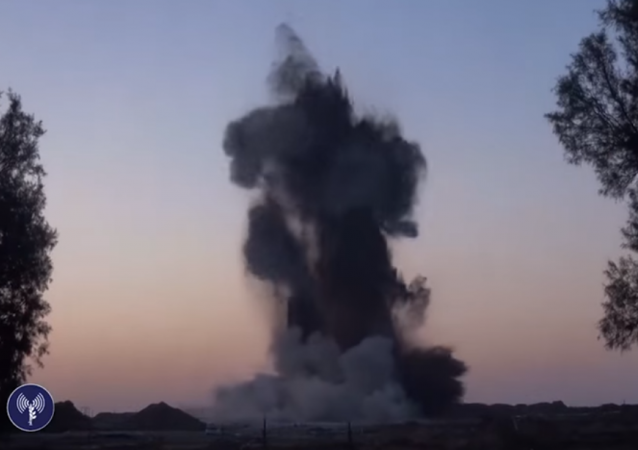 A few days ago we reported on a Hamas tunnel from Gaza into Israel which was discovered.

David Horvitz, Editor-in-Chief of The Times of Israel, explains the significance of the tunnel, Tunnel exposure shows next Hamas war is a case of ‘when,’ not ‘if’:

With the cessation of hostilities, even as Israel was grappling and continues to grapple with the international community’s failure to understand what we face from the Gaza terror state — step forward Bernie Sanders, BDS et al — Hamas went back to concerted tunneling and rocket manufacture. It has been gaining strength at a “surprising” pace, that same unnameable senior IDF officer acknowledged in last week’s briefing. And it has been utilizing some 1,000 tunnelers, working round-the-clock six days a week.

Inevitably, perhaps, it has suffered setbacks, notably including a series of tunnel collapses, and the exposure of the tunnel revealed by the IDF on Monday. Or, then again, perhaps to say “inevitably” is to miss the mark. Perhaps, Hamas may be asking itself, Israel has been making gains of its own in this relentless battle of wills. Perhaps it has found technologies to combat even Hamas’s well-constructed, deep and reinforced subterranean attack routes. (Israeli security sources were indeed quoted Monday talking about new “technologies” being utilized to find the tunnels.)

And if that is the case, one can only ask, can Israel really be confident that it will determine the timing and nature of the next round of conflict with the brutal Islamists? Hamas, which insists on continuing its efforts to destroy Israel, and which demonstrates such supreme indifference to the well-being of the people of Gaza (and doubtless much cynical amusement at the naivete of the international community), may feel that, fully ready or not, now is the time to attack….

Yesterday, the IDF blew up the tunnel.

Or up-scale any of these options: http://www.garden-counselor-lawn-care.com/how-get-rid-gophers.html

I especially like the idea of the “gopher blaster”. Find a completed tunnel, fill it with a 5% mixture of propane, and ignite it when a group of Hamas “soldiers” is somewhere in the middle of it. Heck, put an automated fill regulator, and rig the igniter to a motion-detector or laser-sensor (the kind they use to ring the bell at convenience stores) to light it up when the “soldiers” get to a certain area of the tunnel.

If it works for gophers, it should work for larger pests, too. 😉

No, run a desalinization plant from the med to the border. Keep pumping the output into the tunnels. Pretty soon the groundwater will rise and there will be a green belt. Win-win.

Plus the cost of new tunnels will become prohibitively expensive. And both sides of the border will be able to grow vegetables easier.

The resumption of hostilities will always be a question of when not if as long as that genocide bit remains in the hamas charter. Israel needs to be ever vigilant in the meantime for whatever sneaky means jerkhadis come up with to launch attacks against them.

I would imagine there’s some degree of strategy involved with defending against tunnel attacks. For starters, detecting them is a pain, so just because you find one, doesn’t mean you should blow it up right then. I presume they monitor it while searching for more, and only blow it up after the tunnel seems to be near completion (as to maximize the investment the tunnelers lose from the project). Making sure the tunnelers have time to evacuate should be a priority, because during the building process, only the lowest level, least-ideologically committed people are working, plus offering cash rewards for the locations of tunnels under construction makes it so the reward-ee doesn’t have to worry about being blown up over making a few quid.

So ideally, a day before the tunnelers decide to pop up and kill people, a series of explosions should occur. (or perhaps if timed correctly, while the tunnels are filled with terrorists all ready to pop out) If so, the date of the upcoming attacks may be closer than we would like to admit.

Israel has 100 times more patience than I would have.

At this point I would have thrown up my hands and actually just conquered Palestine.

Then people would still bitch and whine but at least you could control the terror attacks.

My suggestion is the Israelis run a pipe into the tunnel and pump in salt water, in the Gaza entrance area. Let the tunnel fill with salt water, and continue until the ground around it settles, and the tunnels fills with dirt washed in with the salt water. The neighbors must have known a tunnel was being built. They saw the workers and the dirt being carried away. When the tunnel settles, and buildings are destroyed, too bad, so sad. Besides then the tunnels will be unrecoverable for the next digging operation.

Recognize Hamas as the legitimate government of Gaza. Then observe the acts of war, and respond by bombing every building. They could live in tents like some prophet they revere.

Salt water from where? The sea is all the way on the other side of the strip.

Israel is a technologically-advanced nation. I’m pretty sure they can figure out how to build some kind of pipe-and-motor system to move the water.

The entire strip borders the Med.

I think I understand that these are cement lined tunnels. Upon blowing up the cement lining, I would suggest pumping them with salt water in such a way as to cause the surrounding earth to settle into the tunnel, filling the tunnels up. Then if the Mohammedans wish to try to reconstruct the tunnel, they would find it filled with mud. Besides, as the tunnels fill, from salt water pumped in, the surrounding land would settle. Buildings would collapse. Too bad, so sad. Don’t let terrorist build tunnels in your neighborhood!

I suspect that the new super sensitive gravimeters are being used to identify changes in the earth’s gravity due to the tunnels.

“Home many homes could have been built with the cement Hamas diverted?”

Where did the cement come from?