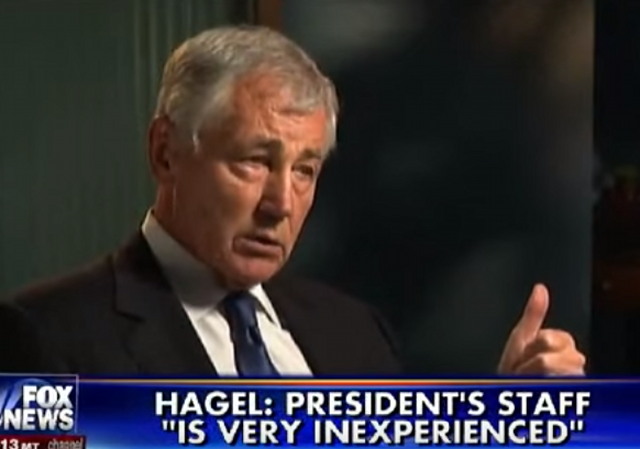 Bret Baier of FOX News recently did a report on how the military has shrunk under Obama, and the response was so great, he went back and aired interviews that didn’t make it into the program.

Baier spoke with three of Obama’s former secretaries of defense, and they all told a similar story.

The Washington Free Beacon has more:

The U.S. military has been hindered by an overbearing and inexperienced White House under President Barack Obama, according to each of his three former defense secretaries, causing the Pentagon to struggle to carry out operations and make decisions.

“It was the operational micromanagement that drove me nuts, of White House and [National Security Council] staffers calling senior commanders out in the field and asking them questions, of second-guessing commanders,” former Defense Secretary Robert Gates told Bret Baier in a new Fox News special called “Rising Threats, Shrinking Military.”

Baier posted clips from the program Wednesday that did not make it to the final cut.

Gates was a holdover from the George W. Bush administration, and Obama kept him on as Pentagon chief. He described how, when he served in the White House, he would have “had [his] head handed to [him], probably personally by the president,” if he tried to call a field commander while circumventing senior Pentagon officials.

“I told the combatant commanders and field commanders … if you get a call from some White House or National Security Council staffer, you tell them to call me instead, and then tell them, oh, by the way, go to hell,” Gates said, smiling. “And that’s directly from the secretary of defense.”

Gates’ successor, Leon Panetta, took office in July 2011 and told Baier he had similar concerns with the Obama administration, despite being a long-time Democrat who served as a California congressman for many years and as Bill Clinton’s chief of staff.

This opinion piece by Carl J. Asszony at the Daily Record addresses some of the central concerns raised by Baier’s reportage:

If one high-level official leaves government service and then criticizes his former boss, we might be tempted to think that person is just a disgruntled employee. But, when three former secretaries of Defense who served under President Obama have strong concerns over Obama’s flawed policies, and one is an avowed Democrat, then there is reasonable cause to listen and a belief there is validity to their criticism.

The recent Fox News Channel television broadcast “Rising Threats — Shrinking Military” highlighted the issue of U.S. military downsizing which has been mentioned in this column and other media outlets for months. But, the television report went beyond just discussing the shrinking military; it also revealed how President Obama, and his administration, deliberately decided to reduce the defense budget and the size of the military to extremely dangerous levels, mistrusted his generals, and looked at the military as an arena for social change.

Keep that in mind the next time Obama says destroying ISIS is his top priority.

“The U.S. military has been hindered by an overbearing and inexperienced White House under President Barack Obama”

The fish rots from the head down.

A lot can happen between now and January 2017.

I was more optimistic than my Conservative friends about the Obama administration once he was elected. I knew he was overpromising, I knew his campaign had been telling its operatives that he was overpromising. I disliked the knowing dishonesty, but I expected Obama to draw on the deep bench of experienced, skilled Democrats available to him, and thereby have an administration that acted more like an American presidency than anything else.

And yet, from the beginning, it appeared that there was nobody smart or skilled in the administration. The former Defense Secretaries have pulled aside the curtain: the problem is in the oval office, and an appointee staff that refuses to be educated by the very professional civil service and military staffs provided to them.

Of course, this is the President that has said that he can do the job of everybody that reports to him better than they can. He has apparently buffered himself with fools.

Perhaps you are still being too generous & optimistic. I think Obama’s staff knows Obama’s objective: Destroy the USA and its military and its police. I expect nothing less from Valerie Jarrett and similar SJWs who only need the mission. Experience is irrelevant.

As he pledged coming into office. Not once, but twice. To fundamentally change America. Like those who follow Scientology, he brought his true believers with him. Others, he marginalized. Mission Accomplished.

Unfortunately, those who will follow the Obama agenda blindly, and who are also smart and skilled, are not great in number. Look at the best he could do for Secretaries of State – Hillary Clinton and John Kerry. Look at his AGs.

Those who are smart and skilled but will not follow blindly, well, this article helps to show what happens to them.

I was in the Marine Corps for 5 years (until 2012) so I have some personal insight into this.

And the military utterly LOATHES Obama.

He has the lowest military approval rating ever recorded by a sitting President – last year it was 15%. FIFTEEN PERCENT.

He pissed away all our gains in Iraq because he was a shallow politician fulfilling a stupid campaign promise, he threw troops into Afghanistan while simultaneously hamstringing them with bullshit ROEs and refusal to approve operations that might actually make progress.

Bush actually had a relatively good military approval rating because he had respect for the troops and BELIEVED in his cause.

Obama threw troops lives away in Afghanistan not because he thought it was a good cause, but because it was good political optics.

Obama is a piece of shit that uses the military as a political prop. And Hillary is going to be even worse.

Olinser :
Thank you for your service. The U.S. military is the ONLY part of the government I have any respect for.

What possessed those individuals to accept a position in that malignant narcissist’s administration? It wasn’t going to go very well to work for a person who had such contempt for the military or the American public. All of this was predictable.

To answer your question – A sense of duty and responsibility. They may have also feared for who may be offered the position if they didn’t take it.

I’d have a bit more respect for these people if they resigned in protest, speaking up at the time.

I agree. It pains me to know that these military leaders see such grievous wrong-doing and remain silent when, quite literally, national security is at risk.

(NOTE: This is a genuine response in which I express my agreement with you on this point; it is not a secretly coded anti-Trump message or otherwise intended to do anything but express my sincere agreement with this particular statement in this particular context. If you still feel the need to attack me, as your cohorts have all day, then go for it. It’s a free country, but only barely. We need our military leaders to speak up . . . at the time.)

Fuzzy, try real hard not to confuse me with “your cohorts”. I have none.

I think if you actually read what I comment upon, you will find it very rare that I ever jump in with “your cohorts”.

I disagree with the TDS crowd, primarily because of the BS created by such. I care not if you personally dislike Trump, or if you think he is conservative or not. While I now find Mr. Cruz to be a distasteful person, he’s no worse and in many ways much better than most politicians. But he is not “True Blue”… I do not wear rose colored glasses.

(NOTE: you brought the subject up)

“it is not a secretly coded anti-Trump message”

Actually, thinking about it, it is sad that you have to include your little note to make sure your fellow TDS sufferers do not think you have any agreement at all with someone not in your “group”.

The “note” is a message…

I mentioned in another comment (above) that some of these men may have taken the post for fear of who might fill it if they didn’t accept the position. This idea also applies to resignation – they may have thought themselves in a position from which they could resist the administration, rather than give way to someone who might be more compliant or less stalwart.

Dave, maybe. But I think your stretching…