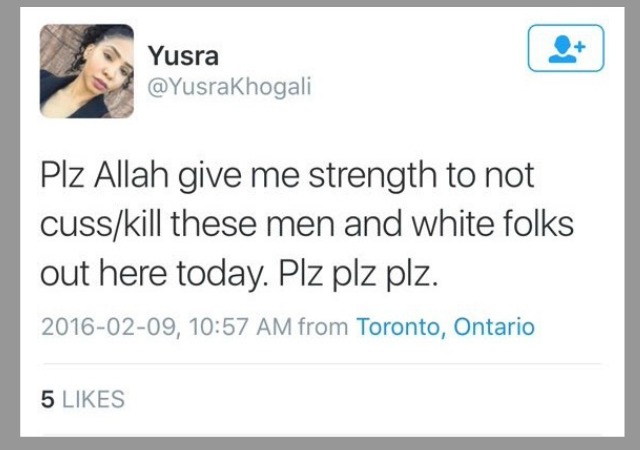 A Toronto-based Black Lives Matter organizer, Yusra Khogali, tweeted about killing, “men and white folks,” in February before deleting the tweet and locking her account.

Many are now calling for a police investigation, calling the tweet ‘hate speech’.

There’s been no comment from Ali yet, but NEWSTALK 1010 has contacted Black Lives Matter and we’ve yet to hear a response.

Believe it or not, the tweet had five ‘likes’ before it was removed. Shortly after, Ali locked down her twitter account. But there was even one response that said “praying for ya… to destroy them.”

The police say they haven’t opened an investigation because no one has come forward to complain. But, one NEWSTALK 1010 listener says the issue was raised with the Toronto Police, and nothing ever came of it.

We’ve now contacted the police, to find out why no action was taken.

The Premier met with the group informally outside of Queen’s Park on Monday, and promised a face to face meeting with the organizers. It appears as though that meeting will continue as planned.

The following is a quote from Michael Coteau, the Minister Responsible for Anti-Racism:

“We are fortunate to live in one of the most progressive, inclusive societies in the world. But there is no question that systemic racism continues to create unfair outcomes for racialized and indigenous persons in Ontario. Black Lives Matter is an important part of a dialogue we must have. Yesterday, I sent an invitation to the leadership of Black Lives Matter to meet with myself and my colleagues Minister Madeleine Meilleur, Attorney General, and Minister Yasir Naqvi, Minister of Community Safety and Correctional Services, to discuss their concerns and how our Government can help address systemic racism in our province. I look forward to meeting with them shortly.”

No one involved in the Black Lives Matters movement is willing to comment on Ali’s tweets. Toronto News reported:

Khogali has yet to respond to a request for comment about the message.

In a sit-down interview with CP24 Tuesday night, a representative with Black Lives Matter Toronto refused to comment on Khogali’s tweet.

“I won’t comment on it,” Sandy Hudson said. “It would be besmirching the memory of Andrew Loku, of Jermaine Carby, and the people who have died in our community.”

Discussing the tweet, Hudson said, was not in the public’s interest.

“This is tabloid,” she said. “It’s not public interest news. It’s not news.

“What is in the public interest is what our decision makers are going to be doing to ensure that black folks are not discriminated against, unfairly targeted, dehumanized, (and) killed by police services in our city and in our country.”

Asked if she had spoken to Khogali about the tweet, Husdon said she was instead interested in speaking with the premier about “what she has committed to for our community.”

Though the tweet was from February, the story is gaining traction across Canadian media outlets this week.

My mind is aglow with whirling, transient nodes of thought careening through a cosmic vapor of invention.
Ditto.

Nowadays, it is hate only when it comes from the right or from white males.

You can say it for what it is: the likes of this woman are racist supremacists, as rabid and as deranged as any National Socialists were in 1932, or the Red Guard freaks were under Mao.

aw, go ahead. words are so…..easy to say. let’s see you spring into action Yusra.

In this case, you can thank Justin Trudeau.

Sounds like a death threat to me. No need to rely on a hate speech standard.

It is not a threat. Quite the opposite of threatening to kill anyone, she’s praying for the strength not to. If she were in the USA it would be protected speech, and no state actor could punish her for it in any way, or even act in a way that might chill such speech.

It would not be protected in the US coming from a white person. It is a threat, and intended to be so.

Valerie, you are delusional. The first amendment protects white people exactly the same as black people, and anyone who claims otherwise is a paranoid freak. The courts enforce it exactly the same way for all.

And no, it is not a threat, and any claim that it was would be thrown out of court. You are not entitled to make up your own facts. A threat requires an actual, you know, threat. Where is it?

It is extremely unlikely that she was really praying for the strength to not commit murder. Overwhelmingly most likely is that she was merely using a rhetorical device to express just how much she hates white people.

I don’t agree with what she says, but I’ll defend her right to say it. Seriously, put her back on twitter, give her a web cam, a talk show, whatever, and canadian conservatives will when the next two elections just based on her.

Couldn’t agree more. As vile as I find what she has to say, I find the discussion of punishing her for saying it 1,000 times worse.

The essence of BLM.

This a few thousand times.
BLM is about hating white people and loving black thugs.

Does Twitter Commando rank above both Mall Ninjas and Chairborne Rangers, below, or somewhere in between? I’m just wondering what the odds are this Yusra chick could snap my neck like a twig.

I hope allah answers her prayer and she does find the strength because I’d hate to use the doomsday weapon on her. That’s right, and you know I’ll do it.

I’ll chalk “Trump 2016” on the sidewalk and she’ll run screaming into the night. In her blind panic she’ll probably run out onto the highway and get killed by a semi.

I’m walking heavy. I’m packing chalk. And I know how to use it.

Back off, people. I think he means it.