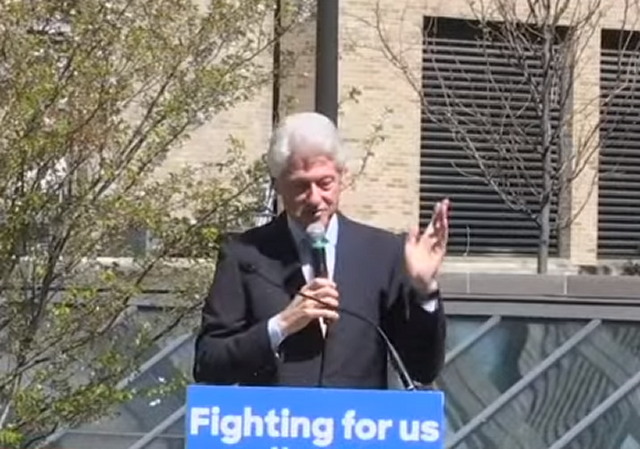 The Hillary Clinton campaign might want to reel in Bill Clinton for a little while, as he’s starting to do more damage than good.

In an obviously unscripted appearance this week, President Clinton suggested that Bernie Sanders supporters might want to shoot people on Wall Street.

“One of the few things I really haven’t enjoyed about this primary: I think it’s fine that all these young students have been so enthusiastic about [Hillary Clinton’s] opponent and [Sanders] sounds so good: ‘Just shoot every third person on Wall Street and everything will be fine,’” Clinton said in Fort Washington, N.Y., according to CNN.

“The inequality problem is rooted in the shareholder-first mentality and the absence of training for the jobs of tomorrow,” Clinton added.

Clinton said after the event on Friday said that the quip illustrates Sanders’s focus on blaming the financial industry for America’s woes.

“It’s a joke,” he told MSNCB. “It’s a total joke. It’s meant to point out that’s the unilateral explanation for everything that’s wrong with America. You know, we all need to lighten up here, have a little sense of humor.”

Bernie Sanders’ campaign manager responded on CNN. Watch the video in the tweet below:

It’ll be fun to watch Hillary try to spin this.

“You know, we all need to lighten up here, have a little sense of humor.”

Good luck with that, Slick.

The same idiots who blamed Palin’s poster for Gabby Giffords getting shot will give the old Chancred Willie a free pass on this. Their hypocrisy knows no bounds.

They’d beat the bankers to death.

Not sure what the uproar is here. Sanders political beliefs always devolve into death and dispair.

Only in reality. And every time they’re tried.

So Bill is saying Hillary is really running against Sanders to protect their revenue stream? Makes sense.

One in three is an underestimate. What percentage of the Kulaks did Stalin kill?

Perhaps if the Sanders followers did kill one in three on Wall Street, the remaining brokers would get over their hatred of the social conservatives and join forces.

You can have a sense of humor but only with the political camp that agrees with you. With any division or chaos in the ranks of the state-run propaganda machine, you will always lose it seems like.

Meanwhile, over on Fifth Avenue, Trump is blasting away.

You get the idea that Bill is just in this campaign for laughs?