A plan we can all agree on 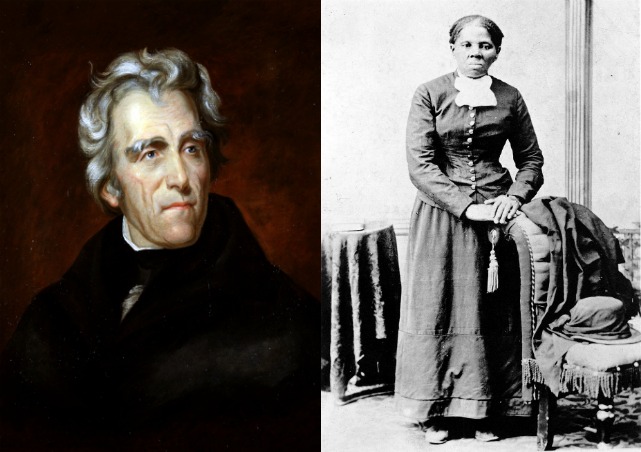 Earlier this week, I blogged about the ongoing $10 bill saga and what looked to be its conclusion — the Treasury would leave Alexander Hamilton alone, or at least on the $10 bill.

Wednesday, that was confirmed. Tremendous backlash, and the assistance of a widely popular musical about Alexander Hamilton caused the Treasury to reconsider their original plans. Hamilton will stay on the front of the $10, but changes will be made to the back of the bill. While Jackson is getting booted off the front of the $20 bill, he’ll likely be sticking around on its flipped.

Treasury Secretary Jack Lew on Wednesday will announce plans to both keep Alexander Hamilton on the front of the $10 bill and to knock Andrew Jackson off the front of the $20 in favor of Harriet Tubman, sources tell POLITICO.

Lew is expected to roll out a set of changes that also include putting leaders of the women’s suffrage movement on the back of the $10 bill, and incorporating civil rights era leaders and other important moments in American history into the $5 bill.

Also, Jackson isn’t getting completely booted off the $20 bill. He’s likely to remain on the back.

Lew’s reversal comes after he announced last summer that he was considering replacing Hamilton on the $10 bill with a woman. The plan drew swift rebukes from fans of Hamilton, who helped create the Treasury Department and the modern American financial system. Critics immediately suggested Lew take Jackson off the $20 bill given the former president’s role in moving Native Americans off their land.

Lew told POLITICO last July that Treasury was exploring ways to respond to critics. “There are a number of options of how we can resolve this,” Lew said. “We’re not taking Alexander Hamilton off our currency.”

A plan we can all agree on

This whole “replacement” thing smells. 100% political, buy some votes quick for the party during election time.

By HER own people’s accord, claim and desire, Tubman is not an American. She’s an AFRICAN-American.

Maybe our $20 bills will only be worth 3/5 their former value?

This “we” is all decent human beings, a category which clearly excludes you. FOAD.

This plan stinks to high PC heaven. I am fed up to the eye teeth with the Demoncrat’s rewriting of history. Hopefully this stupid plan will go the way of the Susan B. Anthony’s and die on the vine.

Better a Tubman than any Obama.

They should print $3 bills for Obama’s portrait.

The 2 cent bill would be more a appropriate. It’d be worth less than it costs to print but still worth more than its namesake.

Slate wants Obama on the currency next:

At least Harriet Tubman has some moral claim to being memorialized. I’m relieved that the historically ignorant, politics-addled leftist kids in charge of things didn’t select Ethel Rosenberg or bend the rules for still-living Angela Davis or Bernardine Dorhn, all lionesses of the Left. After all, “it’s past time for a woman on the currency” and “we can’t wait.”

Of course, the very popularity of this Hamilton musical is forcing me to return to research on the man to be sure that any respect I have for his efforts is not misplaced.

I find Harriet Tubman to be a fine choice for the bill. I don’t understand the hurry to change it, but oh well.

I think it’s a bonnie idea, AND she should be pictured holding one of her several firearms.

LOVE IT! The Republican pistol-packen’ momma who struck fear in the hearts of the Deemocrat night-riders!

Great. More ammo in my personal fight against those who have been taught that the Republicans were the architects of the Jim Crow era and Democrats freed the slaves.

So, Harriet Tubman, a gun-toting Republican, will replace Andrew Jackson, the architect of Native American Genocide. And the Democrats are just too stupid to realize what they have done because to them, “Identity Politics” trumps facts and logic.

On the Twitter thread provided by David Burge (pic.twitter.com/G9dVXpTaXv) there is a prototype $20 bill illustration showing Harriet Tubman with a revolver in her left hand and an extended right hand, with an added caption in the text – “Follow me to freedom and liberty”. That is a design proposal I really like, even if some wag suggests that it refers to following the money.

It appears that the picture of Harriet Tubman used in the @0 bill mock-up was based on the cover art of a book by Ann Petry:

Oh great now we will have kids being expelled from school for bringing a 20 on campus, and I am only halfway joking.

So they’re going to lock Harriet Tubman inside ATMs, to be taken out at the beck and call of white men whenever they want to use her?

Sounds racist to me.

A suggestion for Mr. Lew and those who agree with this plan: If you want changes made to our currency, pay for them out of your personal funds rather than leaving the taxpayers on the hook for your social justice whims.

After reading recent hints that we need to stop paying with cash, one has to wonder who expects to benefit from this folly.

Not pay with cash? How are we supposed to buy illegal guns at gun shows and bribe politicians??

What social justice whims? And pay for what? The change doesn’t cost anything; currency gets updated every 20 years or so anyway.

Why don’t they use Aunt Jemima instead of Tubman? She’s much better known.

Iowahawk has it down cold.

Here is the problem with placing Harriet Tubbman on US currency. Historically all portraits on US bills belong to past Presidents, Founding fathers of the nation or, in two cases, Secretary of the Treasury [one of whom was also a Founding Father and the other of whom was also a Chief Justice of the Supreme Court]. Now, no disrespect to Ms. Tubbman, but she is none of these things. She is merely a social justice warrior. Now, if we are going to use being a social justice warrior as a criterion for placing a person’s portrait on a US bill, then we open a hu8ge can of worms. Perhaps Martin Luther King, should be on a bill. What about Thurgood Marshall? Then there is Harvey Milk. Ceasar Chavez, perhaps? Maybe Susan B Anthony. Susan B Anthony is already on coinage, but the standards for putting likenesses on coinage have always been much more relaxed than for bills, having included an Amerindian, Lady Liberty as well as various animals.

Other than to be politically correct, there is absolutely NO reason to divert from tradition and replace a former President of the United States with a social warrior.

“She is merely a social justice warrior.”

You are merely a flucking moron.

Why portraits at all?

Why did you not question the universal practise of putting portaits on currency, until a black woman is set to be on one? Why should the practise suddenly become controversial now?

One politically incorrect problem with Tubman’s selection is that the only existing portraits or photos of her are from when she was old and decrepit looking, rather than when she was younger and doing her life’s work.

The other politically incorrect problem is that a former slave will once again be used to exchange for goods and services.

I would have wanted Abigail Adams on the bill, but Tubman’s just fine with me. She’s a good choice.

At least it’s not Oprah!

Tubman is an excellent representative of the era just prior to the Civil war. The fugitive slave act. The Dred Scott decision. The turmoil at the time over Kansas. Uncle Toms Cabin. A positive image.
Jackson not as much. The Spoils System, the trail of tears, co founder of the Democrat party.

I only learned of the significant contribution Jackson made to America last year when I read about the Battle of New Orleans, January 8 and January 18, 1815.

Jackson stood up to South Carolina during the nullification crisis, which saved the Union and provided the moral underpinning for the North in the Civil War. And he did do at a time when Henry Clay and the Washington Establishment were perfectly content to submit to Sputh Carolina

He literally saved the country.

Maybe we can rename Jacksonville to Tubmanville? Just a thought…

Burge is the only thing I miss about twitter.