Alexander Hamilton Will be Safe on the $10

Alexander Hamilton Will be Safe on the $10 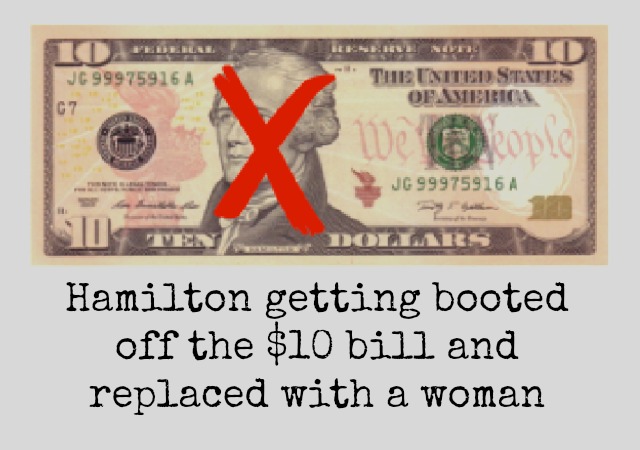 Treasury Secretary Jack Lew is supposed to announce some time this week that Alexander Hamilton’s home on the $10 bill is safe.

While Hamilton might be safe, Andrew Jackson is not.

Along those lines, Lew also plans to announce this week that Andrew Jackson — a less beloved former president whose face graces the front of the $20 bill — will be removed in favor of a female representing the struggle for racial equality, according to the government source.

That decision would place a female on one of the most widely circulated bills in the world. But the historic change placing a female on the front of the $20 note won’t come for more than a decade, the source said, since the process for changing the design of that note is still in the early stages.

“The soonest that a new $20 note will be issued is 2030,” the source said, citing a lengthy process convened by the Advanced Counterfeit Deterrence steering committee, which includes representatives from the U.S. Secret Service, the Treasury, and the Federal Reserve.

I’m fine with this. Andrew Jackson is less worthy of having his mug adorn our daily exchanges than hundreds of other American heroes.

Though I still object to the notion that a woman should be on our currency simply so we can say we have a woman on our currency. Women need not be pandered to.

I blogged about this ordeal last summer, and my opinion remains unchanged:

The Treasury attempted to be female friendly in 1978 when they printed $1 coins featuring Susan B. Anthony’s face. Only 1/3 of the coins were circulated though. Despite the convenience of the $1 coin, the fad never really caught on.

Of the available jackasses printed on our cash (read: Andrew Jackson, though he knew how to throw a killer party), why replace Alexander Hamilton?! If there’s anything insulting about the latest attempt to feminize American cash, it’s that Hamilton is getting booted for a yet to be determined chick just so America can say we have a chick on our currency. LAME.

I would vote for Marilyn Monroe to be the face on the bill: she’s the face of one of the last great American industries that hasnt been outsourced.

The mothers of poets/inventors/explorers…of great men are no mediocre lot.

And what American indutry are you referring to?

I meant that American women are mediocre/unaccomplished in the categories that other countries have seen fit to put women on their currencies.

There’s no American Marie curie or Jane Austin or Queen Elizabeth out there. I suggested Marilyn Monroe, considered to be the greatest of the female movie stars, a leading American export. but, whoever is picked better be worthy of the man she’s replaćing. Putting up another Sacagawea (whose contributions are undocumented and speculative) is just pandering.

I don’t think the LI community wants to see Hillary on the $20 either.

Andrew Jackson was truly a military genius. At the Battle of New Orleans he decisively defeated the foremost fighting force or the day. Many of the British Troops and Officers he defeated had been instrumental in defeating Napoleon at Waterloo. Jackson was outnumbered and outgunned. Many of his troops were militias or even raw volunteers.

Yes. Jackson removed the Cherokee from their homelands because they joined with the British against the colonies. He never trusted the Cherokee. But, it was not racism but experience that motivated the Trail of Tears.

Martin Van Buren, who was stuck with the depression that began in 1837, would disagree with you on Jackson’s economic policies.

But his policies, especially concerning the Bank of the US are the best reason to remove him from the currency. The president who declared war on the BUS can therefore stop spinning in his grave.

Depressions and panics in the 19th century were a different beast than they are today. There were plenty of Depressions and Panics in years that ended with upwards of 7% GDP growth.

Anyways it is very telling that Hamilon (who created the bank which was a political power grab and economic failure) is staying and Jackson (who ended the bank, which freed enterprise to a level unseen before or since) is out.

Pulling federal deposits from the BUS and sending them off to state (“pet”) banks did open up new opportunities for graft.

Meanwhile, thinly capitalized western banks contributed to a bubble in land prices. They went bust in the depression.

A women on US currency could be easily solved, kill two birds with one stone. Make a new denomination: 3 Dollar bill and put “Caitlin” Jenner on it. Brilliant!

How about a 72 cent coin was th Gloria Steinem’s face on it?

We’re talking about using the front and the back of the bill to tell an exciting set of stories.

Put Aaron Burr on a bill if you want an exciting story.

If I want an ‘exciting story’ I’ll read a book. Printing money isn’t the vehicle – it’d be worse that the 140 character Twits.

There is no reason to waste govt money doing this.

The currency changes over time, anyway. The incremental expense will be minor.

Not only was Hamilton the first Secretary of the Treasury, I believe he wrote 51 out of the 85 federalist papers urging ratification of the U.S. Constitution (Do schools even teach this history anymore?).

He should remain on that bill.

Alexander Hamilton also played a significant role in George Washington’s Crossing and the attack on Trenton. Hamilton and a single compatriot attacked the Hessian outpost. Using the swords the killed or wounded Six Hessian soldiers.

We could always put a picture of the SNL character “Pat,” who was sexually ambiguous, to represent everybody.

But really, who else has a Broadway show named after them ?

Well, since the Navy is naming ships after living people now, I see no reason why Hillary can’t be on a Bill. (Sorry about that)

Jack Lew should worry less about the “stories” the bills tell and more about keeping their value. When I was a kid, my mom could buy an entire piled-high shopping cart of food at the supermarket for $20.