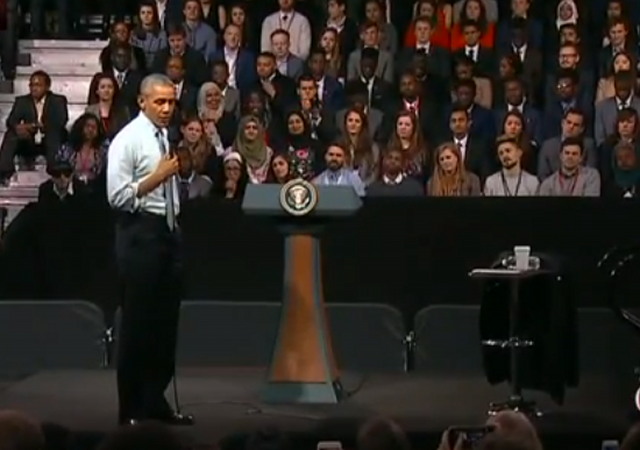 The American economy is off to a horrible start in 2016. GDP grew a measly 0.5 percent in the first quarter of this year. No wonder Democrats want to talk about transgender people and bathrooms.

The U.S. economy expanded in the first quarter at the slowest pace in two years as American consumers reined in spending and companies tightened their belts in response to weak global financial conditions and a plunge in oil prices.

Gross domestic product rose at a 0.5 percent annualized rate after a 1.4 percent fourth-quarter advance, Commerce Department data showed Thursday. The increase was less than the 0.7 percent median projection in a Bloomberg survey and marked the third straight disappointing start to a year.

Shaky global markets and oil’s tumble resulted in the biggest business-investment slump in almost seven years, and household purchases climbed the least since early 2015, the data showed. While Federal Reserve officials on Wednesday acknowledged the softness, they also indicated strong hiring and income gains have the potential to reignite consumer spending and propel economic growth.

“The fact that personal consumption is a bit on the soft side is a disappointment, especially in light of the low gasoline prices,” said Thomas Costerg, senior economist at Standard Chartered Bank in New York, who correctly projected first-quarter growth. “Consumption seems to be stuck in a low gear.”

Bill O’Reilly talked about this in his opening monologue last night. Be sure to watch all the way through so you can see Obama’s stunning statement on the strength of his legacy:

As long as we’re talking about depressing economic news, check out this report from Forbes:

Lost Dream: 90% Of Americans Are Worse Off Today Than They Were In The Early 1970s

For the vast majority of Americans, their nation’s economy is in a prolonged stagnation, far worse than that of Japan. When it comes to real income that is–income adjusted for inflation.

90 percent of Americans earns roughly the same real income today as they earned back in the early 1970s, according to a recent study released by The Levy Economic Institute (Figure 6).

Japan’s economic stagnation reaches back to the early 1990s.

Economic stagnation didn’t reach the remaining 10 percent of the population, which has seen a sharp rise in their real incomes over the same period.

Things were quite different in the decades preceding the 70s, a period that stretches back to the late 1940s, when real incomes rose for both groups – with the 90 percent group staying ahead of the 10 percent group in real income gains.

Clinton’s answer to this problem is simple. Cattle futures!

If you think the economy is expanding at all you have not been paying attention. This number will be adjusted downward (into the negative range) in 3 or 4 weeks.

We are in a recession even by the Obama administration’s standards.

Actually, Matt, just heard on Fox Business that BO wants the world to acknowledge how gifted he is. He truly is an economical wonder boy, and it is our fault for being so blind to his financial power.

If a corrupt news media wipes your ass every time you crap yourself, you just might begin to believe your press.

The horror of this malignant putz’s reign is almost over.

the only part of the economy Obola has grown is the firearms and ammo segment.

And yet, after 7+ years of this anemic “recovery”, the press will preface every bad economic report with the word “unexpected.”

Thus the real reason for all these secret meetings could be a panic that the Fed’s eight year explosion of money creation has not just failed to revive the economy, but is about to cause another major market meltdown.

When the government’s method of measuring ‘recovery’ are designed by them to show positive results and the results still come up wanting, you know we’re screwed. What we are seeing now is that the strategy for economic recovery helps just a very few, the richest that have bought their way to success. As I drive the freeways here in Houston, I see two kinds of vehicles, clunkers and over the top luxury SUV’s. (Who really needs a Porsche Cayenne to ferry their kids to soccer practice?) As an aside, I think much of the rabid support for Trump and Sanders we see is the result of frustration we all feel because all our hard work really doesn’t help us advance. They see politicians growing incredibly wealthy and not serving us while we struggle.

From Solyndra to welfare promotions to climate change advocacy, the Ruling Class has squandered America’s wealth on pet projects and continues to shrink the individual’s ability to create wealth.

And with half the nation+ not paying income tax, many Americans have no skin in the game, just as the Ruling Class has planned.

That’s definitely true in my experience. When I got out of the Army in ’72, I got a job as an entry-level electronic tech making $680 per month. It doesn’t sound like much but on that amount I could afford to rent a house ($150/mo. with an ocean view!), pay all my bills, and have plenty of disposable income left over to play with. I even bought a brand new 11′ sailboat out of two paychecks! When I relate this story to younger folks, they just don’t believe me.

What we need now is some ‘Hope and Change’.

Bless Nixon for bombing the hell out of Hanoi, but unleashing the EPA on American industry has made for a lot of very rich Chinese. My former governor was right about those alphabet agencies needing to be abolished. Thanks Nixon, Carter and Bush 43 for just making government bigger. I know this thread is about Obama, but he isn’t the only jackass we’ve had in the White House.

However, he is the crown-prince of jackasses.

He is the “Clown-Prince” of jackasses.

Correct. He is merely the most recent jackass.

Nixon is also the one that made it possible for all that manufacturing to go to China due to Most Favored Nation status.

The bigger the fed gov gets, the smaller the GDP. The only reason that there is any percentage showing “growth” is because someone fudged the numbers. Our economy has flat lined.

It’s expanding? I would have thought we had a negative growth.
That said, this is all Dinglebarry’s plan: to destroy America and our culture in order to remake it in his graven image. He is a truly evil man.