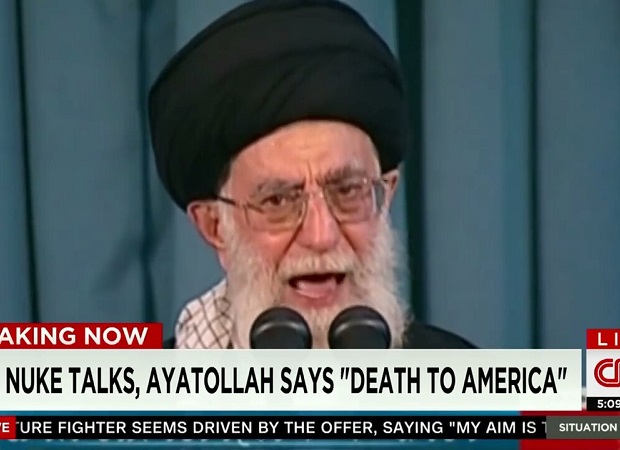 John Kerry’s Iranian “partner for peace” has spoken again. This time calling for an all-out war against Israel, the only trustworthy U.S. alley in the Middle East.

Iran’s foreign minister Javad Zarif, who also negotiated the now-infamous Nuclear Deal, seems to enjoy a great personal relationship with Kerry and they both even call each other by their first names. According to Financial Times, Javad and John are “two affable men who struck a relationship that transcended the stubborn enmity between their nations.”

President Obama too has a great regard for the Iranian dictator Ayatollah Khamenei, or as he likes to calls him, the “Supreme Leader.” President Obama praised Ayatollah’s Fatwa or religious edict against nuclear weapons.

And the “Supreme Leader” showed what he thought of President Obama and his own ‘nuclear’ Fatwa, when he tweeted an image of the President of United States committing suicide despite the signed Nuclear Deal last July — taking a break from the usual chanting of “Death to America.”

On Sunday, Iran’s Foreign Minister Zarif called on Muslims across the world to unite against Israel. “We as Muslims must put aside our differences and within an organized framework take practical measures to put an end to all signs of occupation,” Zarif said while addressing the Organization of Islamic Cooperation (OIC) Summit in Indonesia.

Just in case anyone had any doubts about Iran’s intentions. A senior Iranian official spelled it out once again this week. “Our positions against the usurper Zionist regime have not changed at all; Israel should be annihilated and this is our ultimate slogan,” Iranian Parliament Speaker’s Adviser for International Affairs Hossein Sheikholeslam told Iran’s Fars news agency this week.

Ironically the great Islamic “unifier,” Iran, is waging a war in Syria on behalf of genocidal Assad Regime in Syrian Civil War. The war fought on Islamic sectarian lines has now claimed over 470,000 lives.

In the war against the Jewish State and only democracy in the Middle East, Hezbollah is Iran’s weapon of choice. The Lebanon-based terrorist group that depends on Tehran for its funding and training, has intensified its threat against Israel. Foreign Policy reports:

Hezbollah is counting on this becoming a flashpoint for any future conflict with Israel. In fighting alongside the Syrian government, Hezbollah has not only lost the lives of more than 1,000 of its fighters, it has also gained a level of tactical experience and weaponry that has made it a far more threatening force for its enemies elsewhere in the region. Those close to the group say that for the first time Hezbollah has the ability to bring a war with Israel into Israeli territory.

“In the next war, Hezbollah won’t stay on the borders, and the Israeli settlements in the north will not be protected from this,” said a source close to the movement based in south Lebanon. “Hezbollah will bring the war to them, and Israel’s biggest concern is over Hezbollah’s experience in Syria, as it now has the experience to be offensive rather than just defensive.”

Thanks to Obama-Kerry Nuclear Deal, Iran got a sighing amount of $100 billion as well as access to international banking network. It is not a coincidence that post-Nuclear Deal, Iranian influence extends from the Gulf of Aden (Yemen) to the Mediterranean Sea overlooking Europe (Lebanon). Iran now effectively controls an unbroken corridor extending from Lebanon up to the borders of Afghanistan — where it is free to move combatants and weaponry.

And how is the Iran Nuclear Deal holding up? Just last week, the U.N. nuclear watchdog IAEA admitted that Iran had “briefly exceeded a limit set by a deal.”

“Oops my bad, did we just violate the deal we made with the Great Satan?” Ayatollah Khamenei might have said before dispatching his elite Sharia Police to ‘self-inspect’ the nuclear sites.

Don’t expect Obama administration to take Iranian Regime to task over the yet another violation. To the contrary, the present administration has shown boundless trust and empathy for Iranian Mullahs putting in the overtime spinning the nuclear centrifuges.

“It is not surprising that there are challenges for Iran in ensuring it is meeting all of the many nuclear commitments in the early stages of implementation of the JCPOA [Joint Comprehensive Plan of Action], but again, this issue has been resolved,” an anonymous U.S. official told Reuters news agency.

Obama administration’s delusion on Iran’s real intent is simply staggering. However, the great success of Iranian misinformation or deception campaign cannot be attribute to the any sophistication employed by Tehran, but to the utter gullibility of Obama-Kerry Foreign Policy.

Look, is there one person on this site who actually thought that obama would hold up his end of this Faustian bargain? Even the cowardly Demorats knew he would turn his back on the violations. He hasn’t disappointed anyone who knows him.

Who thought the Iranians would change? They still have postage stamps celebrating taking the hostages or as they call it ‘breaking the CIA spy ring’. Can’t get much more dishonest and delusional than that.

Of course, we can only blame O and Hillary for all this. If you don’t have nukes you’ll wind up dead like Hussein or dead and sodomized or vice versa like Khadaffi. Don’t be Khadaffi keep your nukes. Too bad that’s the take away message from the last ten years of American foreign policy.

No matter. The Ayatollah’s divisiveness and name calling have met their match in Obama. The Ayatollah happily knows that Obama turns his crusade against some of the American people because “Allah” is “bigot” in a mirror.

‘Lucky’ for “Supreme Leader” though. Obama and Kerry are the rubes he’s been waiting for to complete his bucket list of hate before he dies and meets…oops, not who he thought.

It is time to put a title on a missile and send the “Supreme Leader” a goodwill package w/Val strapped to it – metaphorically speaking.