What you missed in last night’s Flint Democratic Debate

What you missed in last night’s Flint Democratic Debate 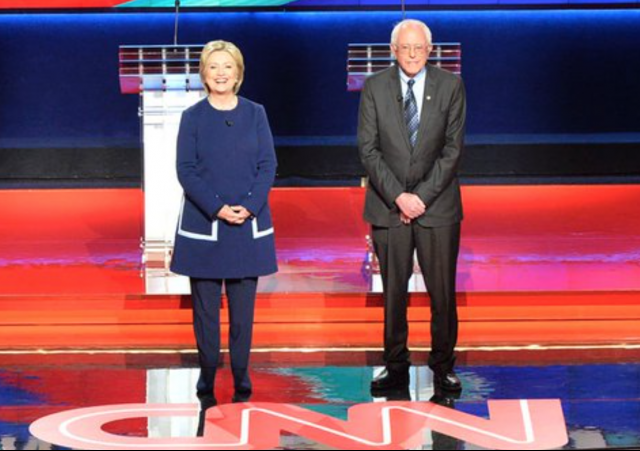 An ‘education SWAT team’? What could possibly go wrong?

1) "Education SWAT team" sounds freaking scary.
2) What the hell is up w/Hillary's accent? What is that?#DemDebate https://t.co/Pp8CIvtxVu

Tell me all your shallow, boilerplate thoughts on God:

.@BernieSanders and @HillaryClinton weigh in on fracking #DemDebate https://t.co/NoOSP5ydnk https://t.co/uSQM7qXLo5

"My answer is a lot shorter: I do not support fracking" @BernieSanders #DemDebate

Everyone hates their Wall Street donors:

.@BernieSanders and @HillaryClinton clash over Wall Street at the #DemDebate https://t.co/NoOSP5ydnk https://t.co/p1jkYZ6DHN

Did you miss last night's #DemDebate in Flint, Michigan? Watch the highlights in 90 seconds https://t.co/40K2O4VEKZhttps://t.co/GzMeDDSSe9

The did discuss the Flint Water crisis. Too bad they can’t face reality that Democrats are primarily to blame for that disaster.

I didn’t watch Dems in Denial. Not relevant. But it must have been a big night for Depends.

When did Islam adopt the Golden Rule?

Islam adopted the first part of the golden rule. Do unto others. That is all.

In what way is a governor responsible for ensuring a city’s water quality? That is a responsibility of the city, not the state. How did the Democrat government of Flint allow lead to get into its water supply and to allow its citizens to drink it for so long?

Blaming the governor for Flint’s water is akin to blaming Bush for the mayor of New Orleans and the governor of Louisiana to issue timely evacuation orders and having effective plans before Katrina.

If you gave her an olde-time sailor hat she’d look just like Donald Duck. To her credit, at least she’s wearing pants.

COOPER: Secretary Clinton, you’ve been endorsed by two of the biggest teachers’ unions. There’s an awful lot of great teachers in this country. It’s an incredibly difficult job, one of the most difficult jobs there is but union rules often make it impossible to fire bad teachers and that means disadvantaged kids are sometimes taught by the least qualified. Do you think unions protect bad teachers?

(After Clinton filibustered giving no specifics to a Flint question:)
COOPER: Secretary Clinton, let me follow-up with that, the people here still can’t drink the water in their homes as you well know. They can’t bathe their kids in the water and they are desperate for accountability and specifics. As president can you give a specific about what you can do if you were president that would make Ms. Wade’s life better and life better for people here?

(Regarding Hillary calling for the Gov to step down)
COOPER: Secretary Clinton – Secretary Clinton, you – you’ve now both called for the governor to resign. I believe that’s – that’s new for you. Previously, you had not called for that, but you’re calling for that tonight. It’s easy to blame the Republican governor, Rick Snyder. But the federal government also dropped the ball here. According to Section 1414 of the Safe Drinking Water Act, the EPA has to step in and take action when a state is informed at (ph) – about water problems and doesn’t do anything for 30 days, as the state here didn’t do. The EPA knew for months and months, never warned the people of Flint not to drink the water. As president, would you fire the head of the EPA?

(when Clinton tried to imply people had resigned and therefore been held accountable at the EPA, Cooper interrupted her)
COOPER: So far, one person has resigned.

(Regarding her speech transcripts she wont release)
COOPER: Senator Sanders, just yesterday, in fact, you said just – I believe it was yesterday you said not only her speech must have been a fantastic speech, it must have been a Shakespearean speech for that amount of money. Is her answer enough for you that she will release it when all the Republicans and Democrats do?

(To Hillary on the Import-Export Bank, in which Sanders had just outed it as a crony-capitalist scheme to give more money to billionaires – specifically calling it the “bank Of Boeing”)
COOPER: I’m going to let you respond but I just want to push back on this. Senator Sanders is correct, the majority of the money does go Boeing, does go to companies like Caterpillar. Do they need this money?

Don Lemon gets to ask questions to – and a couple really good ones!
LEMON: Alright, thank you very much, Anderson. As a black man in America, if I were born today I’d have a one in three chance of ending up in prison in my life. Secretary Clinton, on the campaign trail, you are calling for an end to the era of mass incarceration, but a lot of folks in the black community blame the 1994 Crime Bill, a bill you supported for locking up a generation of black men. Given what’s happened since 1994, why should black people trust you to get it right this time?

(when she filibustered and wouldnt answer…)
LEMON: The question is why should black people trust you this time to get it right? That’s the question

(her response there was literally “well Bernie did it too” leading to Lemon trying one more time…)
LEMON: Do you think your support – your husband has said that this bill was a mistake. Do you think it was a mistake?

…these are just a sample of the awesome, awesome questions asked by the Mods last night – both of which held Hillary especially, but both of their feet to the fire.

Anderson Cooper and Don Lemon were by far the winners of last night. They didnt let Hillary interrupt them, they continually tried to interrupt her when she was filibustering, they came back with facts and inconvenient truths… They were just fantastic (but in a very professional, non-argumentative way)

Oh, and the line of the entire night? (which was given by Cooper)

COOPER: We will have more on the infrastructure shortly but I want to follow up with you. This crisis in flint as you know, as everybody in the room knows was created by the government. Your policies are about expanding government. Why should people from flint trust that more government is the answer?

…yes, that is Anderson Cooper, filling the people in on something even the Republican Establishment seems unwilling to – the Democrat Party is based on a compete contradiction, and Cooper was apparently eager to point it out.

After posing such challenging questions and actually expecting answers from Her Thighness, Anderson Cooper had better tread carefully, and watch out, or his limo will get egged and his pass to the right parties will be revoked. . .